Several QB injuries have paved the way for others to get perhaps their last chance in the NFL to prove themselves, plus a guy in Houston is trying to prove himself out of a job.

When a door in Cleveland, Buffalo, Jacksonville, and Philadelphia opens, does a window for a slot receiver coming across the middle of the defense open? Some of these guys are about to find out.

Here's a look at the QB hot seat watch for Week 6.

The three-head monster that scares nobody

It made sense for the Minnesota Vikings to sign Josh Freeman because Ponder isn't good and Cassel isn't the answer, but it's not often that a team signs a quarterback that is basically just a waiting Jack-in-the-Box. Normally you sign a QB after Week 5 because someone gets injured and then all of a sudden "Thad Lewis is starting? More like Thad Who-is!"

In this case, the Vikings signed a player and want to find out what they have in him. Was the issue Freeman or Greg Schiano or something else? They might give Ponder or Cassel starts in the meantime, but something really unexpected would have to happen for Freeman to not be named starter by December.

Up next: Minnesota returns to America to find out that the Panthers have only allowed three touchdown passes in four games. Man, things really have changed here.

Brian Hoyer overcame some pretty long odds by going undrafted out of Michigan State, not making his first NFL start until he was 27, not really wanted by anybody all offseason, and then doing what nobody thought would ever be possible: Going 3-0 as a starter for the Browns. It's hard to not feel bad for him after his season was ended just as it was beginning, and not really having any assurance that he'll get another good shot.

Weeden is already getting his second shot in the NFL to be a starter, but to be fair, he didn't get his first career start until he was 29. Of course, he was a rookie. Jason Campbell may be waiting in the wings, but he should pull up a bench -- the team already opted for Hoyer over Campbell once, negating that whole "depth chart" thing.

Up next: The Lions pass defense has played pretty well, allowing five touchdowns against eight interceptions.

Well that imploded rather quickly

Matt Schaub confronted by fans at his home 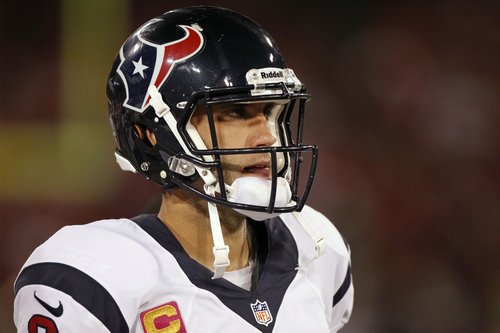 Last week I listed Schaub under "potential changes for the future" and all of a sudden it appears that the future is now. You know things are bad when your coach and teammates have to constantly reinforce to people that you are still the starter.

Schaub seems to have declined as quickly as any quarterback since Daunte Culpepper. He had 21 touchdown throws through 12 games last season, and in his last nine regular season games since then, he has nine touchdown throws and 12 interceptions. There were reports of a "tired arm" late last year and now it looks like that arm has gone to sleep.

Remember in Office Space when Peter talks about doing just enough work to not get fired? T.J. Yates must be just right below that line, because otherwise he'd be hired.

Up next: The Rams defense seemed so promising coming into the year, but now they may be "promising" Schaub a little more job security.

Did you get it? Thad Who-Is? Just one of the many plays-on-words you can find here.

We may play on words, but you can bet that Jeff Tuel isn't ready to play on turf. NFL turf, that is. However, what kind of job security does Lewis really have when very few people had heard of him up until he made a spot-start for the Browns last season. And then even the Browns were like, "No thanks, we're good here."

Up next: The Bengals pass defense provides a fairly good test, but they may look super-human against Buffalo.

What else can we do?

Well, here we are again. The Jags relationship with Henne and Blaine Gabbert has been a "Team Edward vs. Team Jacob" scenario in that we all wish we weren't watching this terrible franchise and we don't care who gets picked just please end the suffering.

Gabbert may be the lucky one here by ending his own suffering and it's up to Henne to lead Jacksonville to Bridgewater. How soon until the Jags just give Ricky Stanzi a few starts like Roy McAvoy swinging for all-or-nothing?

Up next: The Broncos. Really.

If Pryor goes on to have a very successful career, I'm not sure that history will quite remember how it all started. I don't remember many people coming into the season believing that Pryor would be anything less than hard-to-watch if Oakland was "forced" into a situation where they had to start him in Week 1. They traded for Matt Flynn and were hopeful that eventually Pryor would be something.

He's been so something that just the thought of having Flynn on the roster any longer was too much to bear. Flynn joins the ranks of the Trent Edwards, Vince Young, David Carr tryout junkies.

Up next: Pryor gets tested against the Chiefs and if he leads the Raiders to a win in KC, it'll be time for history to start looking back on the career of the successful Terrelle Pryor.

It would make more sense for Chip Kelly to be successful with the younger, less-controversial Foles than it would to win with Michael Vick. The Eagles could let Vick walk, save some money, and Kelly can draft another QB next year to add to the mix with Foles and Matt Barkley. On the other hand, Kelly will want to win.

Philly is tied atop the NFC East with a dominant 2-3 record. Pete Carroll led the Seahawks to a 7-9 record and playoff victory during his first year in Seattle, and the win may have done more for the team than not making the playoffs and securing a division title in year one, no matter how you get it. So if Foles doesn't play well when Vick is injured, he'll be pulled again real quick.

Up next: Against the Buccaneers, he should get tested a little bit. Tampa Bay may be having a disaster of a season, but the defense has been pretty good, especially against the run. So if they can bottle up LeSean McCoy, they'll force Foles to make plays against the secondary.

That could be an issue.