Two defensive players who didn't get much recognition in August have played their way to first half stardom. Danny Kelly heads to the film room for a closer look at what makes Bills LB Kiko Alonso and Chiefs LB Justin Houston so special.

No one could really have predicted how the first half of the year would shake out from a standings point of view, and the way this season has developed is strange, even by parity-strong NFL standards. 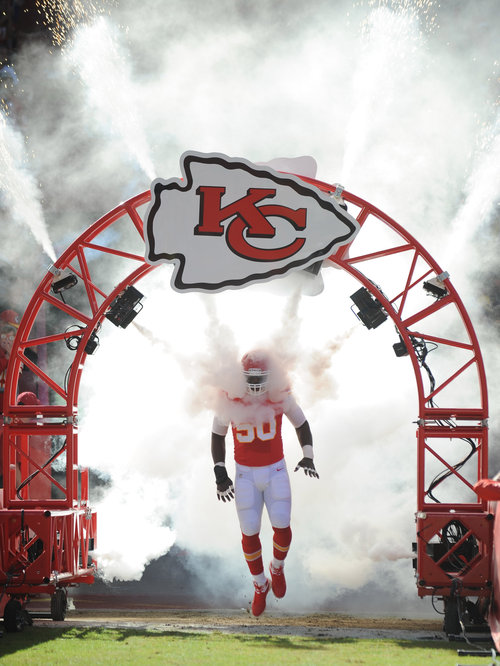 Naturally, it follows that at the half-way point of this peculiar season, a couple of lesser-known players have emerged as legitimate yet surprising Defensive Player of the Year and Defensive Rookie of the year contenders, Bills' LB Kiko Alonso and Chiefs' OLB Justin Houston.

SB Nation's NFL bloggers voted Houston the defensive player of the first half, while giving Alonso the nod for the game's top rookie, offense and defense.

Considering Alonso is playing in smaller-market and last-place Buffalo, many of you reading this now many not know a whole lot about the rookie out of Oregon, but let's just run down a few of his credentials.

- Tied for 1st in the NFL in interceptions with 4.

- The October NFL Defensive Rookie of the Month

In my tape study of Alonso, the things that stuck out to me, first and foremost, are his vision and athleticism. He belongs in that group of 'new-school' middle linebackers that can run from sideline to sideline, drop into coverage with smoothness and balance, and still pack a punch as a tackler.

Alonso displayed quick play recognition/diagnosis, which allowed him to sneak through offensive lines and oncoming defenders to make plays in the backfield or in the flats. He showed a nice feel for zone coverage and an understanding of route concepts. You can see that he has the ability to drop back, keep one eye on the passer while determining quickly, based on personnel groupings and formations, where receivers were headed. He then settles into passing lanes to disrupt and pick off passes - this is a big part of why he had a three-game stretch with four picks early in the year.

For a guy with 81 tackles, a sack, a forced fumble and four picks, it's not really easy to settle on a which plays are most worthy of highlighting, but the following four caught my eye in particular.

In Week 5 against the Browns, this play jumped off the screen because my first reaction was: how the hell did he manage to sneak through the line and past the lead blockers without even being touched?

The answer is: first, maybe a little bit of luck that no one saw him coming, and second, Alonso diagnosed the counter lead run almost immediately and didn't hesitate to act.

This theme showed up repeatedly. I don't know if there's a scouting term for becoming momentarily invisible to opposing lead blockers and offensive linemen, but Alonso managed, on multiple occasions, to sneak through the trash and get a hat on the ball carrier. Here, he almost stunts over the top of the nose tackle, meaning no offensive lineman can react quickly enough to pick him up, then he comes in right behind a pulling guard (RG) and H-Back to blow up the run before it can even get to the line of scrimmage. Impressive play.

Below, in a play against the Dolphins, Alonso manages to do something similar. On this particular play, it's tough to tell if Kiko is in man-coverage on the running back, Daniel Thomas, or whether perhaps he just read the call beautifully, but either way, the University of Oregon product makes a great play.

As you can see, Alonso starts out on the line of scrimmage, threatening the A-gap with a rush. At the snap, he breaks away from what looks like the play-side to follow Thomas out of the backfield. He manages to sneak past two lead blockers on this screen play - the center and the right guard, and drags down the ball-carrier with ease.

The speed at which this play develops makes it all the more impressive. Had Alonso not read that from the start, it looks like Thomas would have had a full head of steam and about 600 pounds in front of him to clear a path.

Last week, in a losing effort against New Orleans, Alonso made a few subtle but excellent plays in run defense. Linebackers are taught to 'fill' certain gaps behind the line and generally speaking, those gaps can become very fluid and hard to identify as the play starts and 11 players on each side start moving around. Here, I believe that Alonso's 'fill' is the gap in which the fullback is heading through with a full head of steam.

Kiko's balanced and patient hesitation and subtle headfake to the left (along with #90 Alan Branch's helmet to the outside of the right guard) means Pierre Thomas is diving through the A-gap. Alonso side-swipes the lead block, rather easily, and hits the ball carrier like a ton of bricks.

Had Alonso rushed forward to take on the lead blocker, the A-gap might've been open for Thomas and things could have ended differently.

Later in that game, as you can see below, Kiko had a nuanced but impressive fill to tackle Thomas for a loss of two yards. When you hear about a player being 'instinctive', a less intangible way of looking at that skill is to call it 'play recognition'. The quicker a player can diagnose what a play is and where it's going, the more 'instinctive' that player can appear. Obviously, there is some innate talent involved with that. Vision, balance, and study of offensive tendencies helps too.

Below, you can see Alonso recognize the inside handoff almost immediately, have the piece of mind (and quickness) to avoid the oncoming center, then move upfield to stonewall the run.

Kiko is a player to keep an eye on as not only the Defensive Rookie of the Year, but possibly a Pro Bowler.

Kansas City upstart OLB Justin Houston isn't as well known as some of Kansas City's elite defenders like Tamba Hali, Derrick Johnson, Brandon Flowers, or even the Combine Superstar Dontari Poe, but he's putting up DPOY style numbers and those stats aren't flukey. The third year player has emerged as a force on the outside for KC and has catapulted himself into the national spotlight - this after quietly earning a Pro Bowl nod in 2012 as a bright spot of the woeful Chiefs season.

The 6'3, 258 pound 24-year old has 11.0 sacks in 8 games, which is 2nd in the NFL only to Robert Mathis, and he's added 29 tackles, 3 passes defensed, and a forced fumble to his statline. Houston was the AFC Defensive Player of the Month for September, and the potent combination of he and Hali have amassed 20 sacks on the season. Kansas City's 36 sacks is on pace for the NFL record by a team.

So how does the 2011 third round pick become a potential DPOY candidate? Amazing athleticism and elite versatility in pass rushing and run defense, plus the added bonus of an ability to drop into coverage. Kansas City can ask him to do just about anything.

First things first, though, outside linebackers in 3-4 defenses are asked to rush the passer. Houston can win one-on-one. I don't care if Lane Johnson is a rookie - you want to see your elite players pick on opposing teams' weak links, and that's what Houston does below.

What's striking to me about the play above is the speed and violence in which Houston plays. He club moves Fisher to get to the outside then manages to chase down, dive, and tackle one of the fasted players in the NFL in Michael Vick. It almost looks like he comes out of his stance at half speed, too. Regardless, Houston's athleticism is on display.

Week 4: Matchup with the Giants. Houston shows that he is not a one-trick pony, only capable of rushing the passer. Below, he takes on a seal-block by New York TE Brandon Myers, manages to get outside of it, then blows the run up at the line of scrimmage.

Rushing the passer is sexy, but honestly, being able to get off a block and stuff a run like this is a big deal too for defensive coordinators. It's what separates situational pass rushers from every-down players.

Houston showed his chops in this department the next week as well. In the play below from Week 5 against the Tennessee Titans, Houston stuffs Ryan Fitzpatrick as he attempts to scramble for the touchdown. The patience and calmness with which Houston operates is what stood out to me here.

On this red-zone defensive play call, it would appear that Houston either has responsibilities for picking up RB Jackie Battle out of the backfield or to simply spy Fitzpatrick should he try to get outside the pocket and run for the score. You can see Houston stay on the ball of his feet, maintain balance and anticipate Fitz's scramble up the middle. Most importantly though, he slams Fitz into the turf before the quarterback and reach out to break the plane with the ball. That's not easy in this close of quarters.

One last example of the type of athlete we're dealing with. Just watch:

Houston rushes, uses a nice 'hump move' to get off the block back toward the inside, and closes on Terrelle Pryor, who, you might have heard, is really fast. Houston dives and makes the tackle - that's not an easy tackle either. Impressive all around.

Kiko Alonso and Justin Houston got off to blistering starts in 2013 and have maintained their high level of play. They're not guys that likely showed up on many preseason watch lists for Defensive Rookie of the Year or Defensive Player of the Year, but they're two names to keep an eye on for those awards as the year goes on.