The Dolphins guard stuck to the party line in an interview with Fox Sports on Sunday.

That was the thrust of Richie Incognito's interview with Jay Glazer of Fox Sports. The embattled Dolphins guard stuck to the misunderstood friendship line that's been parroted throughout the week by Incognito and his teammates. That includes a threat to defecate in Martin's mouth.

The veteran guard did tell Glazer that he regretted the use of racial epithets. He said that was a "product of the environment" in the team's locker room.

"I'm proud of my guy for having my back and telling the truth," Incognito said.

Incognito said that the two communicated with that kind of language, claiming he got a text message from Martin that said "I will kill your entire f'ing family."

"I wanted to see my buddy, I wanted him to call me back," Incognito said justifying the language he used in the voicemail message revealed Monday by Adam Schefter.

He told Glazer that he and Martin communicated this week via text message. He showed Glazer the text message the two exchanged, including one in which Martin blames the locker room rather than Incognito as an individual. 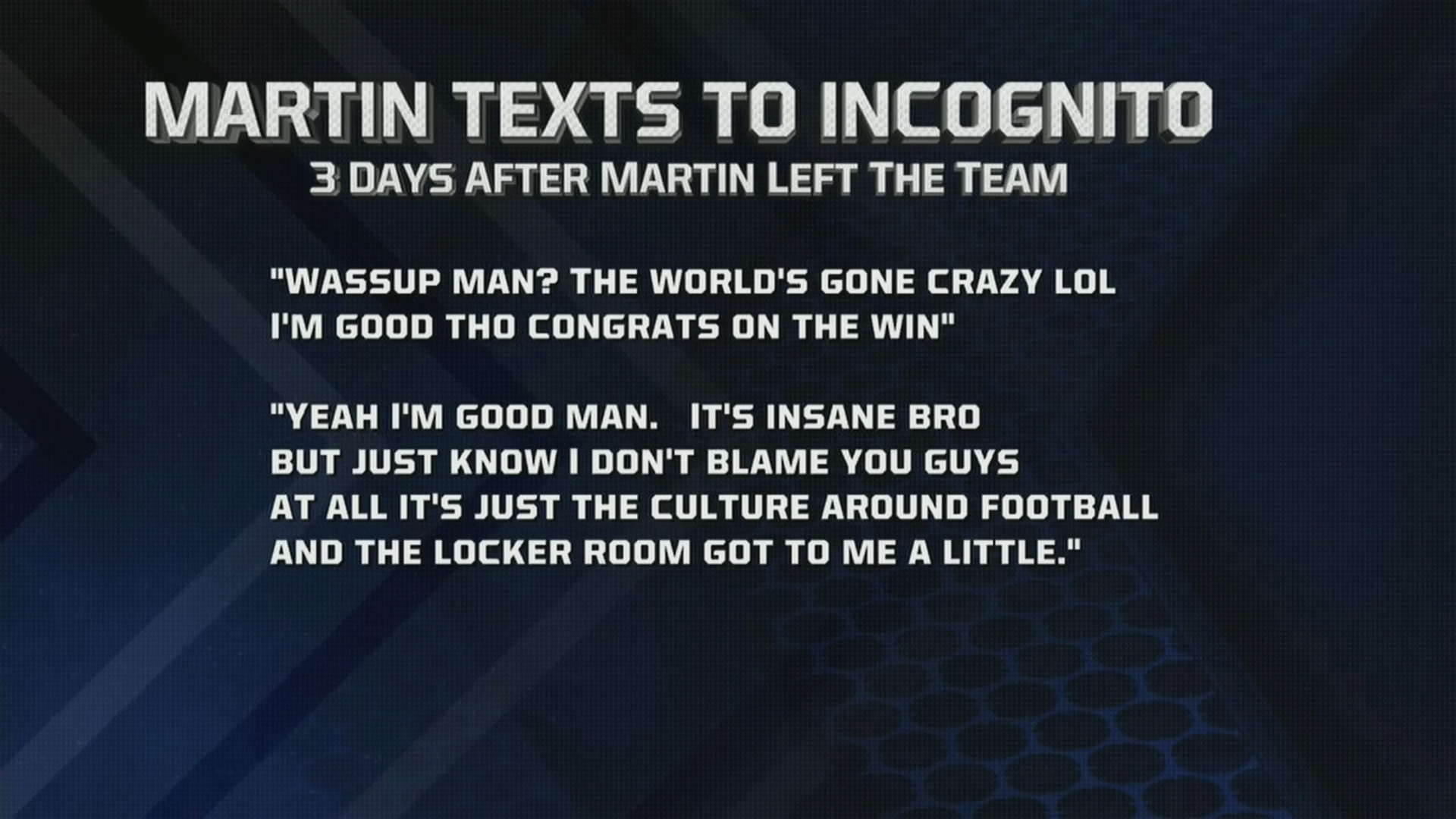 The Dolphins lineman refused to say whether or not his coaches had asked him to "toughen up" Martin, which was reported last week.

Incognito is one of dozens of NFL players who have trained with Glazer at his mixed martial arts program in the past. The interview went about like you'd expect it to given the friendly setting of Incognito's choosing, and the talking points he stuck to were the same ones fed to the public over the last week.

Incognito was suspended indefinitely by the Dolphins last Sunday after the team received a copy of a voice mail message he sent to Martin that contained threatening and racist language. Martin left the team on Oct. 28, reportedly after an incident in the cafeteria.

Over the course of the week, players and the team have added additional detail and perspective to the incident. Several Dolphins players, including quarterback Ryan Tannehill, expressed shock over the incident, claiming that Martin and Incognito were friends. Martin's lawyer, David Cornwell, released a statement Thursday evening alleging Martin had been physically attacked and had his sister threatened by an unnamed teammate.

The NFL dispatched special counsel Ted Wells to investigate the matter. How much head coach Joe Philbin and general manager Jeff Ireland did or didn't know will be of particular interest to Wells' investigation. One report said that Ireland told Martin to confront Incognito this spring. Philbin defended the team's response at a Friday press conference.

At least one NFL Network reporter has heard that the investigation could end up costing both Philbin and Ireland their jobs in Miami.

From @MikeSilver: "Jeff Ireland, the general manager, and head coach Joe Philbin in league circles are not expected to survive this."