Kansas City and Denver are set to square off Sunday night in one of the most anticipated contests this century.

Share All sharing options for: Chiefs prepare for AFC West showdown with Broncos

One team comes in leading the league in scoring with 41.2 points per game. The other team enters with the league's best defense, averaging only 12.3 points allowed per game. Something has to give.

Of course, this is the storyline heading into the matchup between the Denver Broncos and Kansas City Chiefs, which will play out Sunday night on national television after NBC was given the rights from CBS after some NFL dealings.

At 9-0, the Chiefs hold a one-game lead in the AFC West and somehow, the game feels infinitely more important for them. Kansas City comes in as an 8.5-point underdog in some places, a massive spread for a undefeated team. In fact, the biggest of all-time for a team with a 9-0 mark or better. 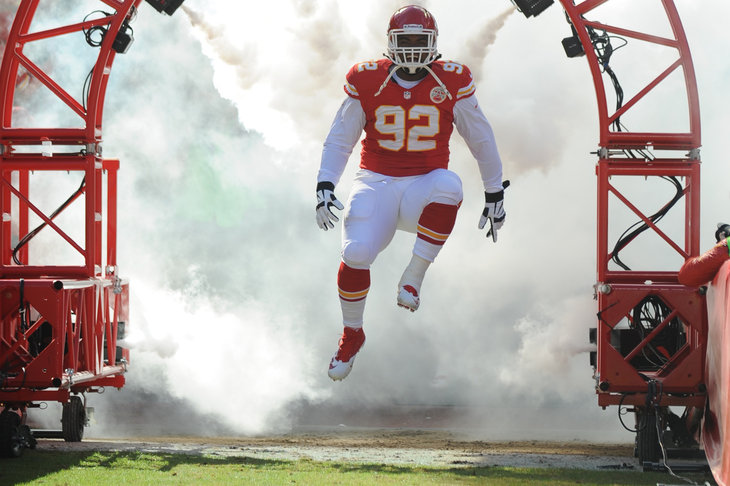 Denver's offense has been almost unstoppable all season, but it has yet to face a defense like the one in Kansas City.

Still, head coach Andy Reid does not want his team doing anything but honing its focus.

"You don't want to get caught up in all the other distractions going on with it being a Sunday night game or playing the Broncos, you want to make sure you get yourself prepared to play a good football team."

For the Chiefs, this is the biggest regular season game since Marty Schottenheimer was the head coach. Other games have had playoff implications since, but since Schottenheimer no team has had Super Bowl aspirations in Kansas City, save the 2003 squad which also started 9-0 but eventually lost in the Divisional round because of a porous defense.

Ask most Chiefs fans, and they will tell you this game is the ultimate measuring stick. With a soft schedule to this point (although, Denver's has been every bit as easy), the national media seems to be waiting for the air to be let out of this balloon. For a fan base that has not since a championship since 1969, the level of paranoia is always high anyway.

Still, while Reid certainly is aware of the history in Kansas City, it all comes down to the basics for him.

"The important part is that you go back to the things you've done every week from a preparation standpoint. You respect the heck out of Denver and you study them and get yourself right as a team. Make sure you know the scheme, stay up on what you need to be at physically at the highest level. That's how you go about doing your business.

In short, this game is about earning a tie atop the AFC West in Denver. In Kansas City, it's about earning respect and being taken seriously. In many eyes, the Chiefs could vault from fringe Super Bowl contender to the leading dog in the race with an upset. It sounds crazy, but what about this season for the Chiefs hasn't been crazy?

Coming off a 2-14 season, any Kansas City fan would have signed up for a 9-7 year and a wild card berth. Now? Nothing short of a division crown and home-field advantage throughout the AFC playoffs will do.

Beating the Broncos will be essential in making both those goals a reality.