Another undrafted free agent is forced into action this week, this time for one of the most storied franchise in NFL history. Plus controversy in Chicago and a necessary change in Tennessee.

Share All sharing options for: NFL QB Watch, Week 11: I Tolzien So

The last time that Scott Tolzien made a start at quarterback, Russell Wilson had not yet played a snap at the University of Wisconsin. It was for the Badgers that Tolzien last played in a game that counted for something, until he was thrust into action for the Green Bay Packers on Sunday in relief of Seneca Wallace, who was only playing because of an injury to Aaron Rodgers.

It was only about 10 weeks earlier that Tolzien had been released by the San Francisco 49ers, and now he's filling the shoes of perhaps the best current quarterback in the NFL.

The injury to Rodgers is only one of a handful of instances where one of the five biggest names in the league has gone down for a significant period of time. In 2008, it was Tom Brady's turn, and Matt Cassel flipped that into a big contract and a long-term starting gig with the Kansas City Chiefs. In 2011, Peyton Manning went down and the Colts flipped that into a much younger version of Manning. A little further in the past, periodic (and often sustained) injuries to Joe Montana gave people a glimpse into just how good Steve Young was.

Could the same happen to Tolzien in a situation where he has been handed the reins of one of the best run offenses in the NFL?

The Packers have no option but to find out.

Young was once a No. 1 pick. Cassel never started a game at USC, but was good enough to go to USC. It turns out that the Colts backups actually were just terrible. Which is Tolzien?

When Tolzien was at Wisconsin, he set the school record for completions in a season with 211 of them. Over the course of his two-year career as the Badgers starter, he completed 68 percent of his attempts for 5,164 yards, 32 touchdowns, 17 interceptions, and 8.7 yards per attempt. And then Wilson came along. 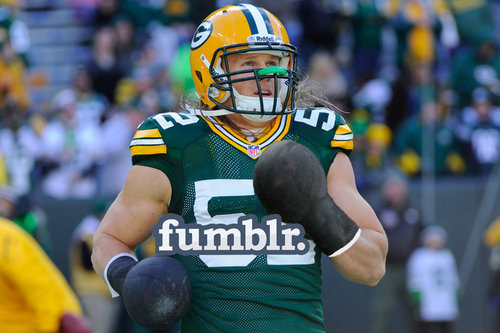 In Week 11 of Fumblr: Making Clay Matthews the perfect weapon, why you're doomed to hate announcers, Terio, tip drills and more.

We also should know by now that Wilson is truly special, severely underrated throughout his youth because of his height. It's unfair to compare most other QBs to him. But we also could start to have an idea that Tolzien is not Wilson. Unlike Young, Tolzien wasn't even drafted. Cassel was just barely drafted, but was a complete unknown when he had to start a whole season for the Patriots, so almost anything was possible.

It seems like less is possible after two seasons at Wisconsin, three preseasons, and two teams that decided not to keep Tolzien around. It's not that teams haven't made mistakes with undrafted free agents before (Kurt Warner) but even the Dallas Cowboys knew to keep Tony Romo around for awhile.

If Tolzien just blows, Matt Flynn will do the only thing he's been successful at doing so far, which is play in relief for the Packers.

The 1st Cutler's the Deepest

The fanbase of a team is often the worst judge of who should be the starting quarterback, but it's getting a little more interesting now in Chicago. A good buddy of mine is a Bears fan and a week ago I mentioned to him that, "Hey, Jay Cutler's coming back already!" and he wasn't too pleased about that. He was ready to see what Josh McCown could do.

Is that as ridiculous-sounding as it once was?

For a long time, it has seemed like the worst part of any season for Chicago was when Cutler got hurt. In the 2011 playoffs, Cutler's only appearance in the postseason, he was hurt in the NFC Championship game against the Green Bay Packers. Cutler had played pretty terribly in the game, but down ,14-0, in the second quarter, he was sacked hard and knocked out for the rest of the game. There would be no comeback with Todd Collins or Caleb Hanie.

The game was winnable. The Bears were only down seven when Hanie threw a pick-six with 6:12 left in the game. But Cutler wasn't there.

The Bears were 7-3 in 2011 with Cutler and looked like they might just be the best team in the NFL after five straight wins, but a thumb injury knocked him out for the rest of the year. Chicago lost five in a row with Hanie and McCown (four of the teams did not finish with winning records that year), and the Bears missed the playoffs.

Cutler missed another game in 2012, a loss under Jason Campbell, and the Bears missed the playoffs by one game.

Now, the question is suddenly whether or not Marc Trestman and the Bears can win with Cutler at all. Chicago is 4-4 with Jay Cutler as the starter, and 1-0 with McCown (though, to be fair, that win came against the Packers as they lost Rodgers to a collarbone injury).

Cutler returned last week against the Lions, and the Bears lost, 21-19.

At 34, McCown has a pretty extensive resume in the NFL. We should know by now that he's never going to be anything special, but we've also never seen him work under Trestman. New coaches, especially offensive-minded ones such as Trestman, might just know exactly what they need. Maybe Chicago doesn't need the gunslinger like Cutler, but the subdued and safer option like McCown.

The Bears have been swept by the Lions and are now essentially two games back of the NFC North lead with seven games left. Winning a wild card could be difficult with the way that the Carolina Panthers and San Francisco 49ers are playing. There isn't much wiggle room for Trestman and he's going to have to go with whoever gives him the best chance to win. There also isn't much for Cutler, an impending free agent. He will miss this week's game against the Ravens with an ankle injury, and McCown will get another chance to show what he can do.

It could be interesting to see which one has a better shot at being re-signed. Either way, it seems logical that Chicago will be selecting a quarterback at some point in the 2014 Draft.

Just a reminder that despite his 0-3 record, Keenum now has seven touchdowns and no interceptions. Matt Schaub has three years left on his deal and still carries over $10,000,000 in dead money for 2014 with $4 million in cap savings, according to OvertheCap.com.

A Carson Palmer-like trade and re-negotiate seems logical moving forward. What's a logical landing spot for Schaub? There actually aren't many starting openings with the recent influx of young talent at QB.

Because right now, his body seems like a bull in one.

I root against the Washington Huskies 365 days out of the year, depending on if it's a Leap or not, but I don't root for injuries to anyone. Especially someone young, talented, and coming-into-his-own like Locker was this season. The Titans were 4-2 under Locker until he was injured -- this time for good -- against the Jacksonville Jaguars.

And then Ryan Fitzpatrick lost to the Jacksonville Jaguars.

We already know that Fitzpatrick's going to start having to put his Harvard degree to use within the next year or two, but what are the Titans going to do with Locker? They can't keep putting their seasons in jeopardy with a player who so often finds himself on the trainer's table. Sure, I'm not saying you have to invest a lot to replace Locker, but you have to invest more.

Locker will have missed 14 games due to injury over the last two seasons now, and that's too much to risk going into 2014. Are the Titans going to be calling their division rivals about Schaub? Or possibly test the waters on Michael Vick?

They'll have to try something.

Underrated for how much he's accomplished in his first three seasons, is Dalton worse off at this point than, say, Joe Flacco or Matt Ryan? He's made the playoffs two years in a row, probably still going to be three, and his numbers are good. It just so happens that he's thrown 104 passes in the last two weeks, both overtime losses.

He's also thrown six interceptions in that time and taking a sack in the end zone in overtime against the Miami Dolphins, while not entirely his fault, isn't a good thing. One again with the ball in overtime against the Ravens in Week 10, after a phenomenal finish on a Hail Mary touchdown completion to A.J. Green, the Bengals couldn't get it down after driving into Baltimore territory.

He's having a case of the MattSchaubitis, but it's too early to be concerned. Cincinnati still has its franchise QB.

Remember how bad Flacco and the Ravens looked last year at times?

It's all working as it should.