No, it's OK to bet on Scott Tolzien this week, at least for covering the spread.

Injuries, particularly at the QB position, are making matchups a little less predictable, and less appealing. But Week 11 ends with two primetime games that could be the best matchups of the season so far.

Parity is the NFL's Horatio Alger myth. The idea that any team, no matter how shitty, poorly coached or mismanaged, can occasionally beat a superior opponent is professional football's founding ideology. That's also why you can justify sinking as much as you do into teams like the Browns or the Lions or the Raiders or the Rams.

It also fucks with betting, or at least the psychology of betting. Watching the Rams beat the Colts last week was exciting. But how do you trust this team to go on the road and beat a sometimes good enough Titans team? On paper, the numbers say that Andrew Luck and the Colts should beat the Titans. The Colts also happened to be 10-point favorites over the Rams.

If you're a fan, it's easy. Just plunk down some cash on your favorite team. Easier said than done. I've spent the better part of the last 15 years watching the Rams. I'd never be able to afford a cooking consultant to tell my nanny how to make kale salad for my kids if I bet on the Rams.

You have to take a long-term view, disassociate yourself from the mercurial ups and downs of the NFL season. Sure, the Colts got thrashed by the Rams last week, but they also lost to the Chargers before beating the Broncos and the Dolphins before beating the 49ers. Just make the best bet you can, and in this case, the best bet is on the Colts to beat the Titans by more than three points.

Somehow, we started using the term "defensive battle" as a polite way of warning people about crappy games. NFL fans are a thoughtful group. The Jets and Bills really could be a defensive battle, a standoff between two units capable of torturing the other team's rookie quarterback. Bills defensive coordinator Mike Pettine was Rex Ryan's understudy for years, from their days in Baltimore up to last season in New York. It's a big reason why the Bills defense is playing up to its potential this year, besides the expected bump you'd get from not having Dave Wannstedt at DC anymore.

Both of these teams are playing with one hand tied behind their back. The Ravens offense is terrible, and Chicago's defense is a shell of its former self. The over/under of 45 points might be the more attractive bet. Take the under.

Jason Campbell versus Andy Dalton is the quarterback battle you never knew you wanted to see. Which Andy Dalton shows up: the guy with six interceptions in his last two games or the one who threw eight touchdowns in the two games before that? The moon cycle says it's time for good Andy Dalton to return, and the Bengals are 4-0 at home this year.

Al Davis died on Oct. 8, 2011. The Raiders were in Houston for a game the next day. Naturally, they won that game, sticking it to the favored Texans by a final score of 25-20. The Raiders won the next game too, against the Browns, but Jason Campbell broke his collarbone. In the power vacuum created after Davis' death, Hue Jackson made the Carson Palmer trade ... and they went 4-6 the rest of the year and set the franchise back years by giving away premium draft picks.

Davis' last gift to the franchise, Terrelle Pryor, watched that 2011 game in Houston in street clothes. He might be doing that again because of a knee injury. The Raiders are playing it close to the vest. If we knew Pryor was going to be playing, the obvious pick here is Oakland because of some bizarre spiritual thing I can't explain. That's not rational betting, and you should probably go with the Texans, Pryor or not. I'm going to stick with weird supernatural phenomenons and take ...

The Jaguars are riding a one-game win streak. They are hot, hot, HOT! Florida's most functional team -- seriously -- got some help from the Titans. The Cardinals are prone to turnovers themselves. Carson Palmer has 15 interceptions, at least one in every game this season.

The problem here is the Cardinals defense. It's very good, and capable of swallowing up offenses led by the likes of Chad Henne. It was nice to see the Jags get the win last week and save themselves from the indignity of 0-16, but here we are again forced to side with the rational instinct.

The condition of Washington's secondary could do wonders for the legend of Nick Foles. On the other hand, this is the NFC East, where secondaries have somehow been made optional. So Washington has a chance to make one of those end zone fades to 5'10 Santana Moss look like the perfect call.

The smart bet is on the Eagles, and Chip Kelly's offense, to win this one. The over/under is set at 53 points, the highest of the week. Trends haven't been very favorable for the over on the games with the highest projected point total this season. As a matter of fact, the Eagles haven't really been prolific scorers at home, topping 30 points just once in four games ... they also haven't covered a spread at home. I think that changes this week.

Some books have this as close as a single point in favor of the Lions. Don't put that much thought into it.

Somewhere, someone has created a prop bet on just how many penalties refs will be calling in this one. Find it, and put $20 on the over, whatever it is.

The Buccaneers are riding a win streak of their own after beating the Dolphins on Monday night. It almost didn't happen. Sitting on a narrow lead, the Buccaneers defense sent blitz after blitz, and the offense kept sending four receivers on go routes under the four-minute mark. It was no match for Miami's incompetence. Win or not, the fact remains that the Buccaneers are a poorly coached team. The Falcons just stink, mostly, because of injuries and being enamored with over-the-hill running backs.

If Peyton Manning wasn't playing so darn good this year, we'd be hearing a lot more about Philip Rivers ... by more, I mean not much at all. He is averaging 328 passing yards on the road this season. His completion percentage of 71.6 puts him on pace for a career high in that category.

Problems in Miami are well documented. And I suspect the dysfunction there, not to mention an offensive line that's even worse than it was, is just too much to overcome this week.

Christmas came early to columnists and other officially sanctioned dispensers of hot takes when the wheels fell off the 49ers offense.

49ers fans won't want to hear this, but I think Kaepernick's passing mechanics are flawed by the pistol-read-option stuff. It's his feet

There was also this from Prisco, posted in the wake of the 2011 NFL Draft:

Questionable move: Passing on Blaine Gabbert and then trading up to get Colin Kaepernick. They will now be linked together in 49ers draft history.

D'oh. Losing Michael Crabtree might also have something to do with Kaepernick's struggles. There's no doubt that the second-year quarterback needs to make some adjustments to be a better player, but the 49ers offense is struggling right now for reasons beyond the quarterback.

Oh, look, Percy Harvin returns just in time to play against his old team. That's the top line for coverage around this game, but it's hardly the same Vikings team Harvin played for last year, partly because of Harvin's absence ... but only partly.

The Giants have won three games in a row, and the Packers are starting Scott Tolzien. Slam dunk, right? Not so fast.

I don't buy the Giants as a 6-point favorite, even with all the Green Bay injuries beyond just Aaron Rodgers. For starters, the Packers have shown a knack for pressuring quarterbacks. Their adjusted sack rate (sacks per pass attempt adjusted for down, distance and opponent by Football Outsiders) is nine percent, the fifth-best mark in the NFL. I'm also not sure I trust the Giants to be consistent for four weeks in a row, at least not enough to beat the Packers by six.

The Notebook: How to stop Denver 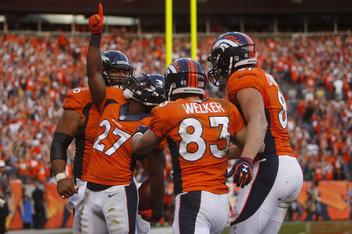 Retired NFL defensive end Stephen White opens up his Notebook, where stopping the Broncos machine is the hot topic after Week 10.

For me, this game's really about what these two defenses can do. Kansas City's ability to maul quarterbacks while taking away any hope a passer has for finding an open man is the key to a Chiefs win. It could also end up telling us just how far either one of these teams can go this season.

Kansas City actually has a better record against the spread, 6-3 versus 5-4. Eight points is just too generous for my liking.

A majority of the action is on the Patriots, and with such a small spread, that means bettors like their chances to beat the upstart Panthers. Both of New England's losses have come on the road (Bengals and Jets). The Jets game is more predictive for this one, since the Panthers' front seven has the ability to take over a game.