Lana Berry went to a ladies-only football clinic hosted by Rob Gronkowski, and all she got was a tweaked groin, possible concussion, unlimited Gronk-tinis, and a feeling of being condescended to.

Harvard is a real place and a mythical place at the same time, and home to some of the brightest minds in the country. Also, Rob Gronkowski is there.

He's there because Rob Gronkowski can't teach women about football just anywhere. Women are smart creatures, after all, and maybe holding a "Football 101" clinic for women at Harvard feels less condescending than doing it elsewhere? It was not long before I believed it actually might be working.

Upon arrival at #GronkFest2013, I am handed a beautiful baby pink "Rob Gronkowski Football 101 Women's Clinic" t-shirt. We are instructed to wear it over any outerwear we have on. Picture 100 women wearing baby pink long-sleeve t-shirts over hoodies and actual coats, looking like lumpy, stale cotton candy. (It's worse than whatever you're picturing.) We enrollees had received an email earlier in the week telling us, in big bold letters, "GYM SHOES ARE REQUIRED, DO NOT WEAR HEELS," so all of the women wore gym clothes. This is probably unfortunate for those ladies who spent the $99 just to see if they could get Gronk's attention. It might have been difficult to stand out, anyway, as there is a huge array of women, ranging in age and personality, including one woman pregnant with twins and a middle-aged woman with Patriots temporary tattoos on her face.

The event information promised that "Gronk-tinis" would be served, and I made it my first mission to find out what's in that drink. I am greatly disappointed to find out that it's not just four ounces of warm tequila in a martini glass. Raspberry vodka and pomegranate juice? Excuse me bartender, there is no Gronk in my drink. And where is my Percocet-rimmed glass? 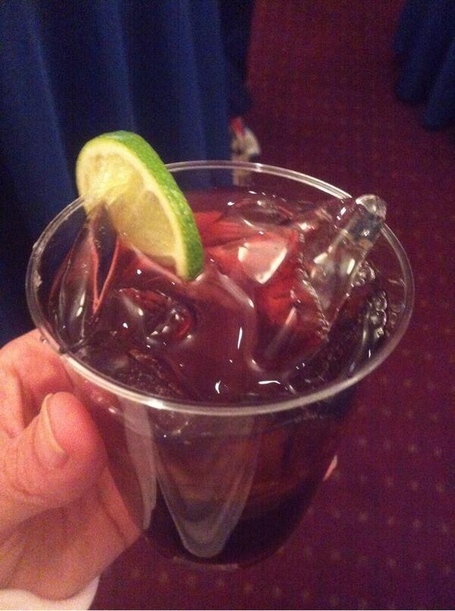 On top of the Gronk-tinis, the impressive open bar offers several types of wine, beer, and mixed drinks. Aren't we supposed to do football drills after this? Not important. Keep drinking. I see women polish off four or five Gronk-tinis. There is also a room with a huge spread of catered food, all of it with reasonable calorie counts (for the ladies), but most of the women appear to be sticking to the alcohol. This feels right at an event hosted by Rob Gronkowski.

Finally, the man hosting the event gets on the microphone. He not only leads the women in a "Fired up!" "Yes we are!" chant, but a Gronk chant as well. He informs us that we need to do this when Gronk makes his big entrance. We have practiced now. We are prepared. He warns us that a dance-off with Gronk and his brother Gordy could happen. He tells (warns?) us to work on our dance skills in case we get into a "Gronk sandwich." The women can barely contain their excitement at the thought of this. "If Gronk had the ball, do you think you could tackle him? If you had the ball, would you want Gronk to tackle you?" Help me.

As we learn a little more about the event, I learn that the "fastest girl at camp" gets to hug Gronk. Assuming "fast" refers to running, I am suddenly grateful for my knee problems. We are told repeatedly to "drink up." If you insist.

Some 45 minutes into the event, Rob Gronkowski finally makes his big entrance, in camouflage Zubaz pants, no less. As someone who actually owns a pair of Zubaz, I immediately regret my outfit choice. We do the Gronk chant, as practiced.

Gronk briefly greets the group with some Q&A, starting with "who is the center for the Patriots?" Pffft, like anyone knows that. (Apparently no one does know that.) This segues pretty quickly into a seemingly rehearsed bit that results in the host asking "what is a tight end?" and Gronk turning around, wiggling his butt, and yelling " THIS IS A TIGHT END!" The women go ballistic; I begin to question my life choices. There's really no tequila in this Gronk-tini? How?

"Girls," Gronk asks, "what would you like to be called tonight? Ladies?" At least he's asking.

That's right, the same Harvard football field where many football greats such as [mumbles] have played.

We are split up into teams and begin rotating stations between different coaches teaching us "fundamental skills of football." I use the term "teach" very loosely because very little is actually being taught, mostly because there is very little time in which to teach or learn. Gronk comes over to our group and teaches us footwork for passing a football, but mentions nothing about actual throwing technique. Most of the women at this camp can't properly throw a football, and no one is teaching them. That seems like a pretty fundamental football skill, but what do I -- a woman/girl/lady -- know about that? So we go through a myriad of drills, including running, receiving, and kicking. Wait, we don't even get to learn how to GronkSpikeTM? I want my money back.

But at least we get to learn how to tackle. We learn this, awkwardly, on a giant foam dummy that vaguely resembles a big red penis, but that's not really the point. It's time to get physical. (Don't worry, we were required to give our entire medical history and our doctor's contact information upon registering for the event, so you know it's safe.) There's also an athletic trainer on site to dispense medication as needed. I wonder what kind of drugs he has.

Upon my first tackle attempt, the giant foam penis hits back and nails me in the chin, resulting in immediate swelling and bruising. It hurts, but not nearly badly enough to accept drugs from a stranger. One of the women tackles the dummy with her legs, wrapping them around it. She looks around to see if Gronk is watching. He isn't.

Whoever is running the event decides that in order to save time, we will alternate between football drills and taking team photos with Gronk. When it is their turn, women sprint toward Gronk, who is already sitting in a folding chair, in order to be as close to him in the group photo as possible. Some even try to sit on his lap. I am instructed to sit near his legs because I am short. I maintain a safe distance.

And then I hear the familiar sounds of "Teach Me How to Dougie," a song that had permanently etched itself into my brain and probably yours three years ago. But wait... this is not "Teach Me How to Dougie." This is some kind of Rob Gronkowski remix. This is a thing. I begin to wonder if the tackling drills gave me a concussion. This can't be actually happening.

But it is happening. The women have started to dance. Both Gronkowski brothers have joined in. This is what we were warned about. THE DANCE OFF IS HAPPENING. I haven't worked on my moves yet! Wait...is that woman doing the worm? Is this football? How hard did that tackling dummy hit me?

We take a seat. The host asks us to tell him what we've learned today. He brings one of the women up. Her name is Elena. She introduces herself as the "future Mrs. Gronkowski." Naturally, Rob Gronkowski comes up and pretends to propose. She tells us what she learned about tackling: "You get aggressive, you get low, you wrap it up." Words to live by. The women start to joke with Gronk about "always making sure you wrap it up." Just your basic football fundamentals.

It is finally time for a Rob Gronkowski "Instructional Lecture." He teaches us about a play the Patriots do called the "Hooker." Seriously, can someone give me a concussion test?

There are, by now, only two things left for us to do on the football field. A 25-yard dash to see who is the fastest girl in camp, and then an obstacle course. Gronk times the runners himself, calling out the winners.

Wait. We're all wearing number 87. The winner of the race not only gets a hug from Rob Gronkowski, but gets to race his brother Gordy. What a lucky lady. The two teams with the fastest times on the obstacle course end up challenging each other in the greatest football test of all: tug of war. I am learning so much.

It's time to head back inside, which is good because my body is now completely numb from the cold. We are rewarded with coffee and donuts. Only a few women actually eat the donuts. Gotta maintain your figure for Gronk, ladies. I hide out in the back with my donuts and my phone charger, trying to regain feeling in my feet, while Gronk and the host begin to give out some awards.

Suddenly, I hear my name called. I have won an award for traveling the furthest. I make my way up to the stage. I feel like a prom queen as Rob Gronkowski places a medal over my head. The medal is a bottle opener. At least it's a good quality one. I can use this.

My legs are covered in turf, my chin is swollen and bruised, I've tweaked my groin while running, I look like a giant cream puff, and I am finally getting my photo opportunity with the Gronkinator. It's a big moment, at least until I take a closer look at the certificate I have been given. It reads: "We truly appreciate your loyalty to Stephen Curry!" The basketball player, Stephen Curry, who is not Rob Gronkowski. 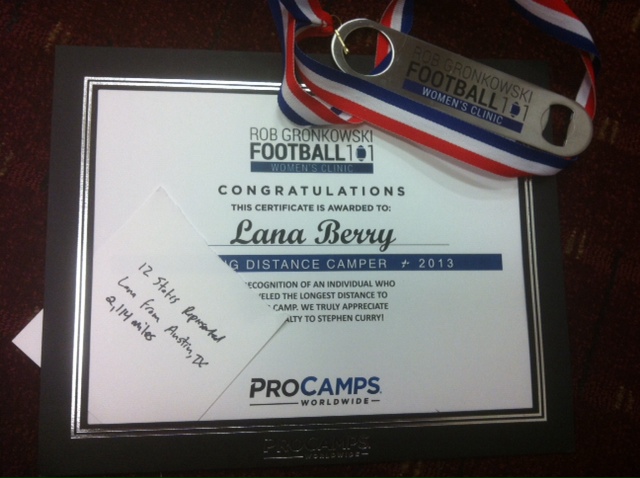 The event finally comes to a close, but not before the women get the opportunity to bid on some Rob Gronkowski autographed items, including his nude photos from ESPN's Body Issue. Definitely a collector's item.

And then it's time to go back to reality. To a world without Gronk-tinis. A world without Rob Gronkowski teaching me how to dougie. A world that feels, suddenly, cold and empty. I will put my Zubaz on when I get home.

I leave the event feeling confused, wondering what just happened and why. Oddly, the fact that this event was run by a company more accustomed to working with young children than adult women is not the most unsettling part of the #GronkFest2013 experience.

That part's harder to explain, but there was the feeling that this event was marketed to a woman who watches sports to get men. Or to ogle athletes. Or to go to events hosted by said athlete, in the hopes of getting a moment of that athlete's attention. I don't think the event runners themselves know quite what kind of person they're marketing at, which left them in a strange position -- trying to find a balance between marketing themselves toward women there to learn more about football and women there to see some GronkButt.

The end result felt bipolar and insincere. Men have struggled to figure out what women want for centuries, so maybe it shouldn't be such a surprise that the sports world is struggling to figure it out. Whether it's offering women makeovers before a baseball game or a boxed set of HBO's Girls on DVD with a basketball ticket, most of these "ladies nights" seem to miss the mark, and reflect that old, overcompensating confusion.

Maybe they'll get it right eventually. Until then, I'll just crack open a beer and watch the game on my own. I have a nice new opener.