Im PFT Commenter and I'm here to give you HARD NFL opinions. If you dont like it there's the door I'm not here to be your friend.

Share All sharing options for: Running Backs- The Walking Dead

PFT Commenter follows up Thursday night's NFL games with a Friday strong take. The FDA has asked us to remind you that this is PARODY. All spelling errors are intentional, we think. -Ed.

Folks last night was such a treat for anyone whose enthusiastic about real QBs playing the real game. You had a matchup of Harvard verse Stanford,, Crimson verse Cardinal, one QB who was taken number 1 over all and another who probly should of been. The real story has been the graffitti on the wall of draft rooms for years- the death of the RunningBack as a position. As I was watching the battle of corn on the cobb verse whole milk in Luck verse Fitzmagic, I took a bunch of notes on my thesis. Lets take a look at just how many RBs have won a MVP in the passed 10 years: 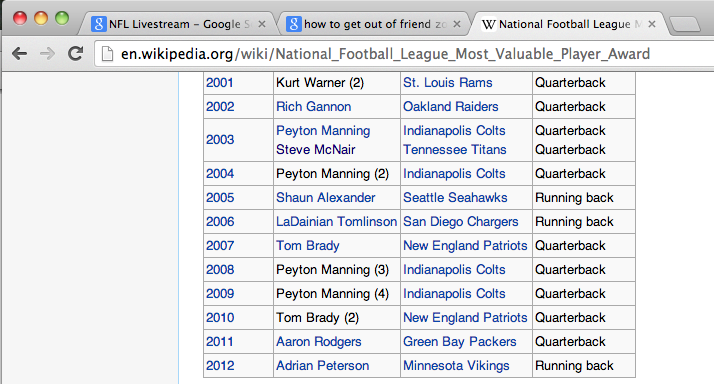 So youve got 3 RB MVPs in the passed 10 years, lets pretend for a second thats inpressive (its not). Thats a great individual award but footballs a team sport. How many of those waterbugs have won a Superbowl? Thats what I thought a big goose egg folks.

No once expects Pagano to be a mental mastermind of the game,, hes just a background type guy with sometimes unorthodox ways to motivate his players, so when he and Grigson traded a 1st round pick for Trent Richardson they must of really liked what they saw on tape- a recurring theme for Richardson this week it seems. Its seldom that you see a guy with more of a first round bust pedigree then Richardson folks whose flamed out in 2 different locations. Its a passing league and its QB-driven sometimes people forget that. If I were a GM I would NEVER draft a HB. I wouldnt even have one on my roster. The fact that a first round pick like Richardson got benched for a forgotten unheralded player like Donald Brown says everything that you need to hear: the Running Back experiment is over. Just look at all these first round busts:

-Bust. Cried on TV when they asked about his Dad in jail at the draft which was kind've cool and something I think they should do to every player whose drafted though.

Even once-good players like Chris Johnson must keep all there money in there socks the way they lose there foot and legspeed after a big contract. Even lastnight Chris Johnsons game was a micro-thing of his career folks. He started out looking all kinds of fast and then sure enough in the second half there was good ole CJ2YPC again. If I wanted a guy to be good for one year then crap the bed for 5 I would of brought in President Obama for a workout folks. Just look at his career numbers:

A steady decline since he had his contract year. He cashed in and checked out suprise suprise.

The running back is officialy dead. If you've got a TE you've got a running back. A TE is just a HB whose smart enough to not outrun there own blockers on a 60 yd gallop thats just as likely to end in a fumble or taunting penalty as it is a factorplay. Bill Belichick proved this last year by putting Aaron Hernandez back there and playing to his strengths in shotgun and pistol formations. Although I dont like the guy you cant argue with production and as a TE he averaged over 10 YPC folks:

If I was a GM Im sorry but Ive got better things to do then spend my time drafting feetfirst players especially when youve got a chance to GET IT RIGHT with a franchise QB. I'd draft 3 QBs every year and spend the rest on OLinemen where you have a much better shot at picking a winner. Last night we saw this first hand in the completion percentages thown by these two heady QBs. One went to Stanford which is a smart school the other went to Harvard which is a smart school to:

These two guys combined for over 70% completion percentege but its just a shame that they both couldnt win. Having a QB who can throw the ball for more then 6 yards per attempt 70% of the time is exactly like a RB who averages 4.5 YPC except your fake RB wont eat up cap space and pul a gun out in a club because someone is wearing reebok shoes with Nike shorts folks. Plus people forget that Andrew Luck runs a 4.6 forty yard dash which is faster than most RBs are after their third paycheck clears. Look at the damage Lucks done with his feet over the years folks:

Those averages are better then most HBs and when you combine that with how smart he is youve got yourself a REAL dual threat. I like to have fun with it and say its much more effective to run the read-option when you've got a QB who can actually read.

When you run down the list of RBs who were worth there weight, most of em were actually just playing out of position and could contribute in other places like Danny Woodhead (WR/mascot), John Riggins (TE/FB), and even some flashier guys like Jerome Bettis(FB/black friend). The bottom line is your more likely to be successful by fitting a square peg in a round hole then you are drafting a RB to play RB and then getting suprised when they get too fat to fit through the A-gap. It seemed like the Colts seem to get it, going away from first round bust Trent Richardson and cutting there losses by going to a TE by committee/HB by QB route. The Titans didnt adjust and Johnson ran them right out of the game. Its now the Colts division folks and there not looking back:

The overall picture bares me out on this folks- the NFL has been progressing away from running the ball for the past 40 years: 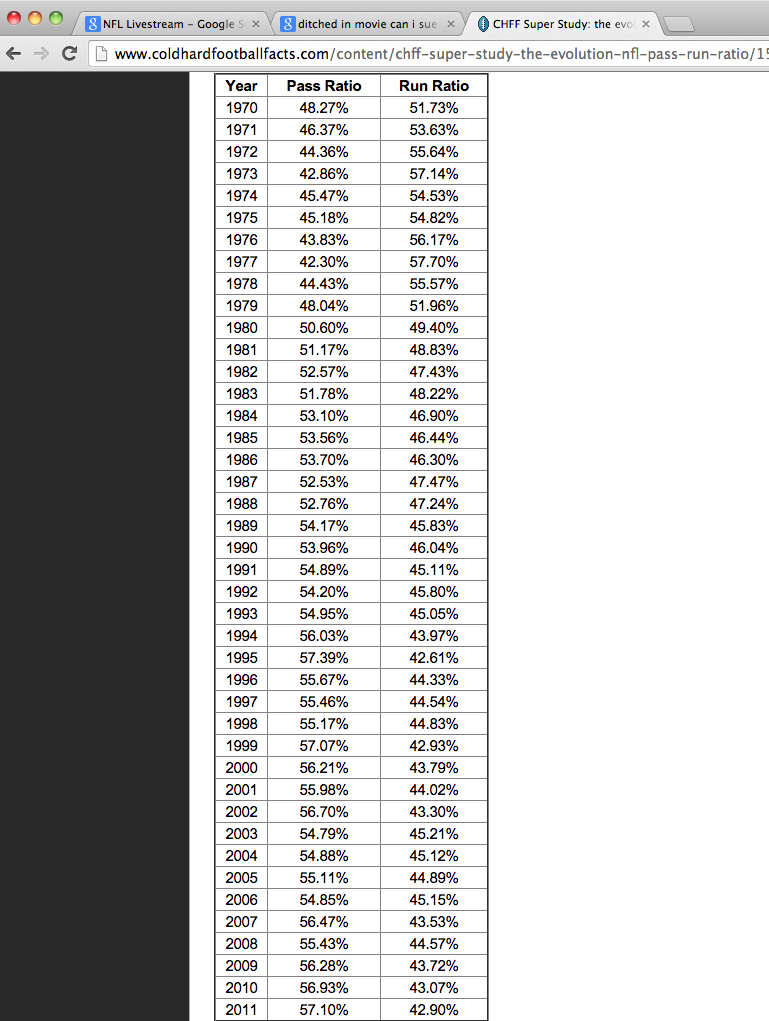 At this rate the running game will be enitrely gone in the year 2100 so why not get a head of the game and eliminate the position now, because chances are we wont even have a country the way things have been going with taxes and the deficit- thats the kind of hope and change america can get behind folks. Wait I thought you believed in evolution. Its time to evolve. Dont believe me? The experts at CBS sports like Pete Prisco even agree heres there big board for 2014 draft, you idiots who still dont think Im right: 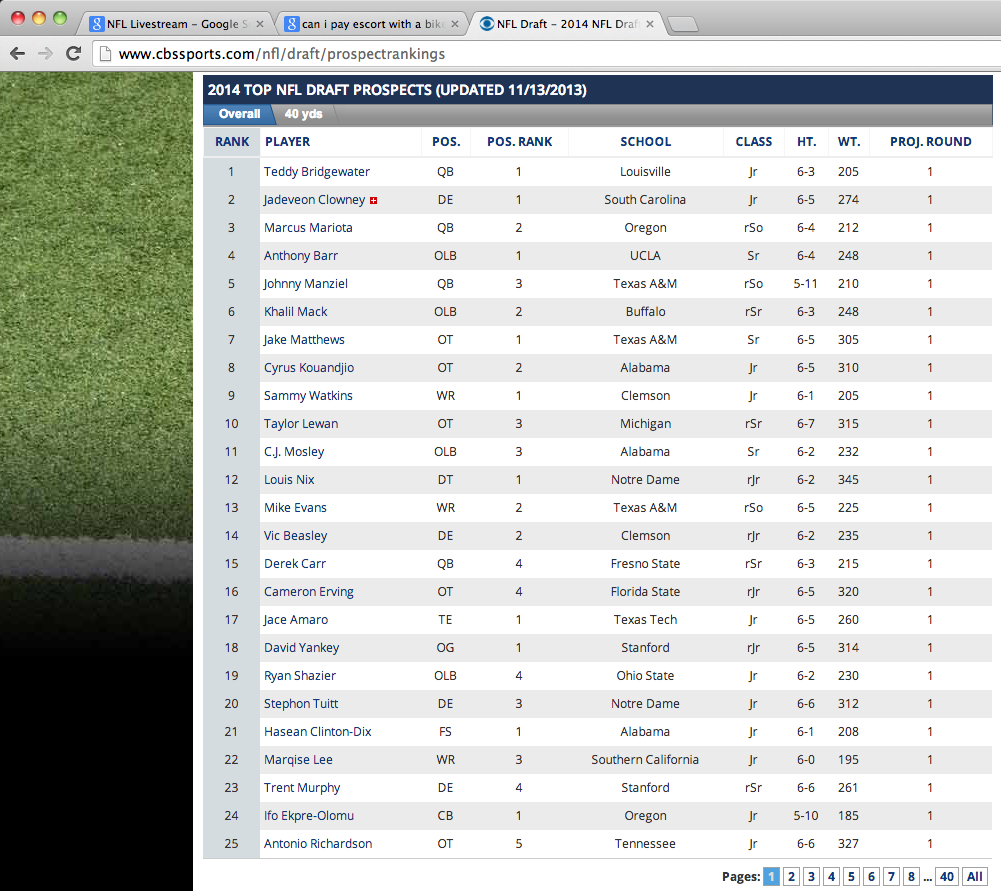 So there. Im right your wrong. If any team out there has the BALLS to make me a GM I would drasticly alter the face of the NFL (its a copycat league) and I guarentee you I would win or at the very least have a wholesome product out there that you'd be proud to bring your family to folks. Sorry, not sorry.