They said he didn't bring it on every down. They said he wore down late in games. They said his health would be an issue. What they forgot to mention was what a high percentage of his team's snaps he played, how versatile he was, or how consistently he dominated the point of attack. 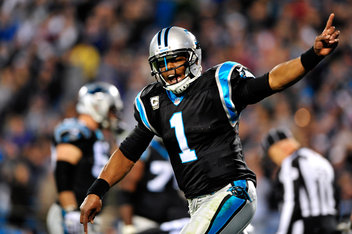 Star Lotulelei was among the most picked apart prospects leading up to the 2013 NFL Draft. He was a prime target as a player who was highly ranked coming into the season. A health scare at the NFL Scouting Combine caused him to drop to the Carolina Panthers, and they couldn't be happier.

Loutlelei is already one of the best defensive tackles in the NFL, regardless of age. He's stepped in and dominated for the Panthers from day one, like most would have expected before the pre-draft nitpicking took place. The New England Patriots found out first hand on Monday Night Football the type of impact Lotulelei can have on the game.

It would be one thing if Loutlelei could only attack an offense from one spot. He would be limited by scheme, which would have explained his draft day fall. On Monday night, Lotulelei showed how his skills can transcend scheme. He's capable of lining up all over the defensive line and making life a living hell for offensive lines from every spot.

Take his sack for example. Lotulelei is lined up as a 3-technique, which is an excellent use of his length and burst. The Patriots refuse to recognize his presence, and Lotulelei makes him pay. 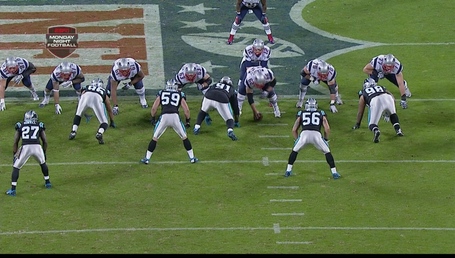 Just look at how quickly Lotulelei (No. 98) ends up in the backfield. The split was too wide, and no interior offensive lineman can deal with his quickness off the snap. 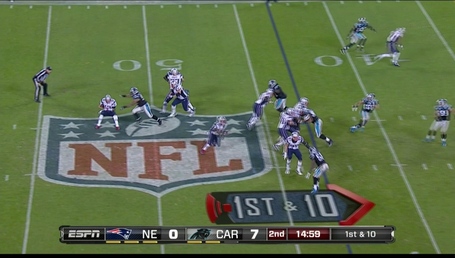 Most commonly, Lotulelei is asked to plug the middle of the line of scrimmage and free up space for Carolina's defensive ends and linebackers. He does this unbelievably well, eating up double teams on a consistent basis. On one drive, Lotulelei ate up a double team on one play and dropped back into coverage a few plays later. The comfortability in space confused the Patriots, freeing up Greg Hardy for a sack.

Those are the little things. They often go unnoticed, but Lotulelei is having a big impact on one of the best front sevens in football. Without his ability to eat up blockers and cause offensive lines to scheme for him, would Charles Johnson be as productive as he is? Would Luke Kuechly and A.J. Klein be cleaning up as many tackles? Maybe not. The Panthers' front seven is the result of a lot of moving parts coming together on a consistent basis: a deep, talented rotation of defensive lineman, of which Lotlelei is a key component, to go with some of the fastest linebackers in the NFL, both in thinking and in foot speed.

We love Carolina but...

From Cam Newton to Luke Kuechly to "Riverboat Ron," there's so much to like about the Panthers, except for one person. That and more in Matt Ufford’s Fumblr.

Don't expect Lotulelei to win Defensive Rookie of the Year. What he's doing isn't showing up on the stat sheet all the time like other players in this class. But whether or not Lotulelei finishes the season with hardware or not shouldn't diminish what he's been able to accomplish from the moment he stepped on the field.

If the Panthers keep winning, Loutlelei will only get to prove himself on bigger and bigger stages. The attention will come, even if only from opposing offensive lines.