Fumblr: You can love the Panthers, but not Jerry Richardson

From Cam Newton to Luke Kuechly to "Riverboat Ron," there's so much to like about the Panthers, except for one person. Also featured this week: handsome men in Speedos, fat guys doing things, Eli Manning's dislikes, hair removal, and more.

Share All sharing options for: Fumblr: You can love the Panthers, but not Jerry Richardson

Every NFL owner is a billionaire -- or close enough, functionally, to be considered as such compared to the average American. The NFL's least valuable franchise, according to Forbes, is the Oakland Raiders, presently valued at $825 million. The Raiders raked in $229 million of revenue in 2012, and spent approximately none of that on haircuts for Mark Davis. And that's the LEAST valuable franchise in the NFL.

I don't know any billionaires. Some of them are probably nice, though it seems more likely that people with the business acumen to accrue ten figures of worth aren't particularly kind or humorous. I assume they're so accustomed to expensive wine and private jets that they no longer think of those things as luxuries. They are humans like you or I, just as the Standard Poodle that wins Best in Group at Westminster and a beach mutt in Haiti are both Canis lupus familiaris.

It is natural, then, to assume that the easy life of an NFL owner -- who will collect millions and millions of dollars every year if he simply does nothing -- is a happy one. Jerry Jones always seems to be having a good time, as does red-faced Robert Kraft in his French cuffs. Dan Snyder, for all his pig-headed faults and naked greed, is at least emotionally tied to the Redskins. And Arthur Blank -- whose pencil mustache fulfills more evil-rich-guy stereotypes than perhaps any other owner -- prefers the Falcons sideline to a luxury box.

These people are not people who have any of the same problems as those who fill the seats that fill their coffers, but averages Joes can at least look at these aging show poodles and find a common bond of caring about the same sports team.

Richardson is the sour, unsmiling, founder of Hardee's and the Panthers who forced his own sons out of the business in 2009. He's also the owner who took the hardest line against the players' union during the lockout of 2011, allegedly insulting the intelligence of Drew Brees and Peyton Manning, among other players. It's safe to say that he would have canceled the season if it meant giving less money to the players.

He's also responsible for this quote:

Richardson became so angry at Sean Morey after the recently retired player cited a slew of statistics on player safety and average career length that the Panthers’ owner snapped, "You guys made so much [expletive] money – if you played three years in the NFL, you should own your own [expletive] team."

The average NFL salary is $1.9M (the median is $770K), while the average NFL team is worth in excess of one billion dollars. I don't know what kind of investment tips Richardson has, but that statement flies right past hyperbole and lands securely in greedy asshole territory.

Oh, and Sean Morey? Merely a career special teams hustler who transitioned into a player advocate around the time that he realized his series of concussions had started to affect his moods and family life, as documented in The United States of Football.

So, NFL fans, enjoy Cam Newton's on-field brilliance and the Panthers' bruising defense. Revere in Ron Rivera's sudden willingness to go for it on 4th down, and be happy for NFL fans in a section of the country where the SEC typically determines football allegiances.

But save just a little bile for Jerry Richardson, a poisonous, vile old miser who has nothing but bile for you.

It didn't take long for the Speedo-clad Dolphins fan to become a meme: 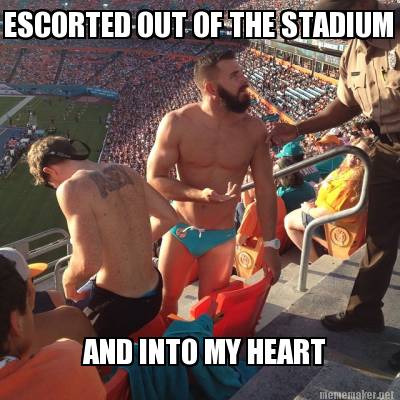 But I'm not content with a simple meme. A handsome bearded man in a Speedo deserves more. He deserves Photoshop! 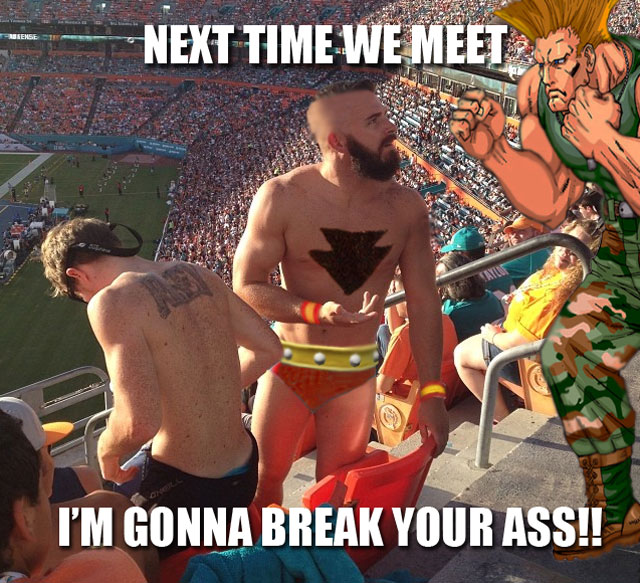 If you don't love Street Fighter II, stop reading this article and go away forever. HADOUKEN!

KSK's Mike Tunison tweeted this on Sunday, and -- like the deadly video in The Ring -- I must share it with you, lest the horror of this image results in my untimely demise. Show this to your friends, or these faceless monsters will crawl out of your computer screen and try to sell you Wranglers. 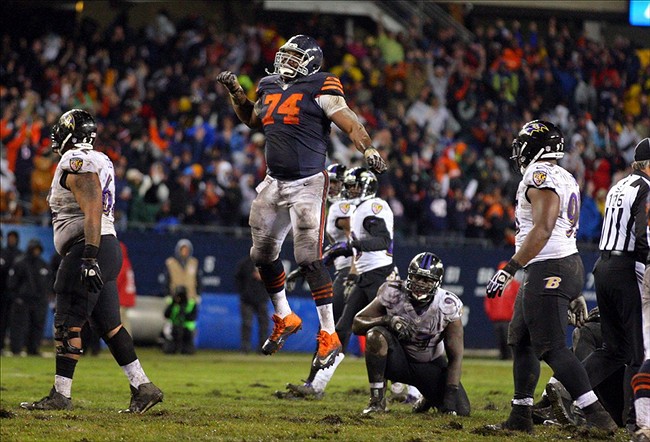 (via The Agony of Defeat)

Nick Fairley needs to get more sacks so that we get more celebrations like this pic.twitter.com/3UsPInuUgK

Years of being mean on the internet has turned me into an addict for sadness and disappointment. Unfortunately, it has now been a month since either Manning brother has lost a game, and I'm jonesing HARD for Manningface -- that mid-game GIF above just doesn't cut it if the final result is a victory. So, while I wait for misfortune to trip up the Broncos and/or Giants, please enjoy this fantastic, near-weekly series of tweets from Rob Fee:

I try to follow international soccer, and one of the sport's more casual charms is how players are willing to sport outlandishly preposterous hairstyles. And so I'm 100% in support of disasters like this:

But MANNNNN was I not ready for Jason Babin's dread-scalping of Andre Ellington: 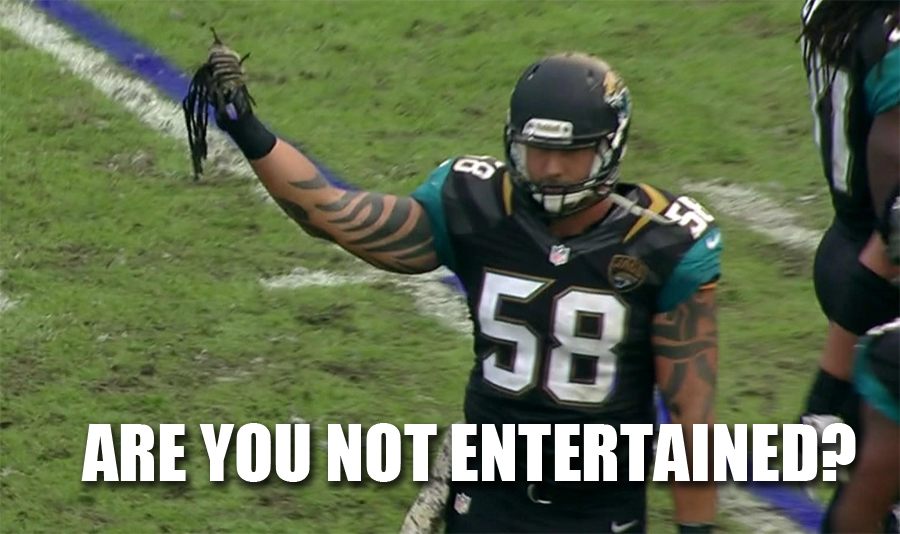 Thankfully, no real harm was done.

Good news - Andre Ellington got his hair back after all #AZvsJAX pic.twitter.com/MWlbVHLRBg

Hair is all good. Nothing serious. Look worse than it really was. S/o to the dread heads! Will get it stitch back in. Birdgang got the win!

After an early challenge from the Bucs, the Jaguars are once again the NFL's dominantly bad team, holding a decisive advantage in the race to the draft's first overall pick. They rank dead last in the NFL in DVOA, weighted DVOA, and offensive DVOA, and are 31st in defensive DVOA.

On the plus side, they lead the league in on-field dreadlock removal. Suck on THAT, Broncos.