Two of the hottest NFL sensations last year have fallen on relatively hard times this season. Which player comes out with a much-needed victory on Monday night?

Share All sharing options for: 49ers vs. Redskins 2013 game preview: Kaepernick vs Griffin on Monday night

Last season seemed to be "The Year of the Exciting Young Quarterback," and perhaps no two were more fascinating than Robert Griffin III and Colin Kaepernick. Both players were dual-threats, both players led their teams to the playoffs, and now both players aren't playing near the same level they were a year ago.

Has the league "figured out" how to stop these players, or is it simply a fluke? A sophomore slump? Both players are going to have to find a way to turn things around when the Washington Redskins and San Francisco 49ers meet on Monday Night Football.

The Redskins have fallen to 3-7 and don't seem likely to repeat as NFC East champions unless they have an even more unlikely winning streak to end the year than they did in 2012. The 49ers have lost two straight games and are falling out the race in the NFC West and right into the heart of a bunch of teams fighting for a wild card berth.

Both teams could use a win Monday, and both quarterbacks could use a big game to quiet their doubters. Which will come out with the victory?

Washington went from 3-6 to 10-6 last season after an incredible second-half run that ended the regular season with excitement but the postseason with anguish as Griffin tore his ACL in a home playoff loss to the Seattle Seahawks. After rushing for 815 yards and seven touchdowns as a rookie, Griffin has only 345 rushing yards and no touchdowns this season.

He is leading the league in fumbles with 10, and his 10 interceptions are twice as many as he had a year ago. Could he be turning it around right now?

Griffin has five passing touchdowns over his last two games, but he's attempting over 37 passes per game, compared to just 26.2 attempts per game in 2012. He's being asked to do more as a passer since he can't do nearly as much as a runner right now, and it seems like the offense is suffering a bit without the same threats it had a year ago.

And with probably the league's worst pass defense, Washington can't stop anyone from scoring either. The Redskins are 30th in the NFL in points allowed. Can Kaepernick take advantage of this pass defense on Monday?

After sitting behind Alex Smith for a year and a half, Kaepernick finally got a shot in 2012 after Smith was hurt and he was called upon to take on a bigger role. And that he did.

In seven starts, the team went 5-2 under Kaepernick and he averaged 8.3 yards per pass attempt and 6.6 yards per rush with 15 total touchdowns and only three interceptions last season. That culminated in a postseason run where Kaepernick threw for nearly 800 yards in three games and compiled 264 rushing yards and seven total touchdowns, but the 49ers fell just short of winning the Super Bowl against the Baltimore Ravens.

Yet everyone has expected them to be right back in the race thanks to a top-notch defense and a full season of Kaepernick, but the third-year pro has not been nearly as productive.

His yards per pass attempt is down to 7.2. and he's throwing an interception at twice the rate he did last year. The excitement level around Kaepernick is not quite what it was a year ago, and the 49ers are now 6-4 and have fallen into a three-way tie for the final playoff spot with the Arizona Cardinals and Chicago Bears. Though San Francisco holds the tie-breaker in that race right now, the Niners could find themselves on the outside if they lose Monday night.

Hogs Haven breaks down the issues in the passing game in the second half against the Philadelphia Eagles with an exorbitant amount of GIFs that's a must read:

With a little more touch on this pass, it would've been a touchdown and possibly saved us from a week of: "WRs didn't get open" "Eagles knew our play calls" "Is RG3 a leader?" "RG3 is taking shots at coaches again" "RG3 didn't call the right protection" "I, Me, Us, We, You, You, You, We" Etc, etc, etc.

Niners Nation took a look at the 49ers' struggles in the running game during their 23-20 loss to the New Orleans Saints last Sunday:

Running to the left side of the left guard, 49ers running backs picked up 40 yards off of six carries. Running to the right of the left guard, they only managed 16 yards off of 13 carries. One of the biggest problems was the fact that the 49ers' typically sound blockers all struggled in some way. That is to say, the supporting cast outside of the offensive line in Vernon Davis, Vance McDonald and Bruce Miller all struggled on the day.

Be sure to check out SB Nation's team blogs, Hogs Haven and Niners Nation, for more analysis and highlights from the game. 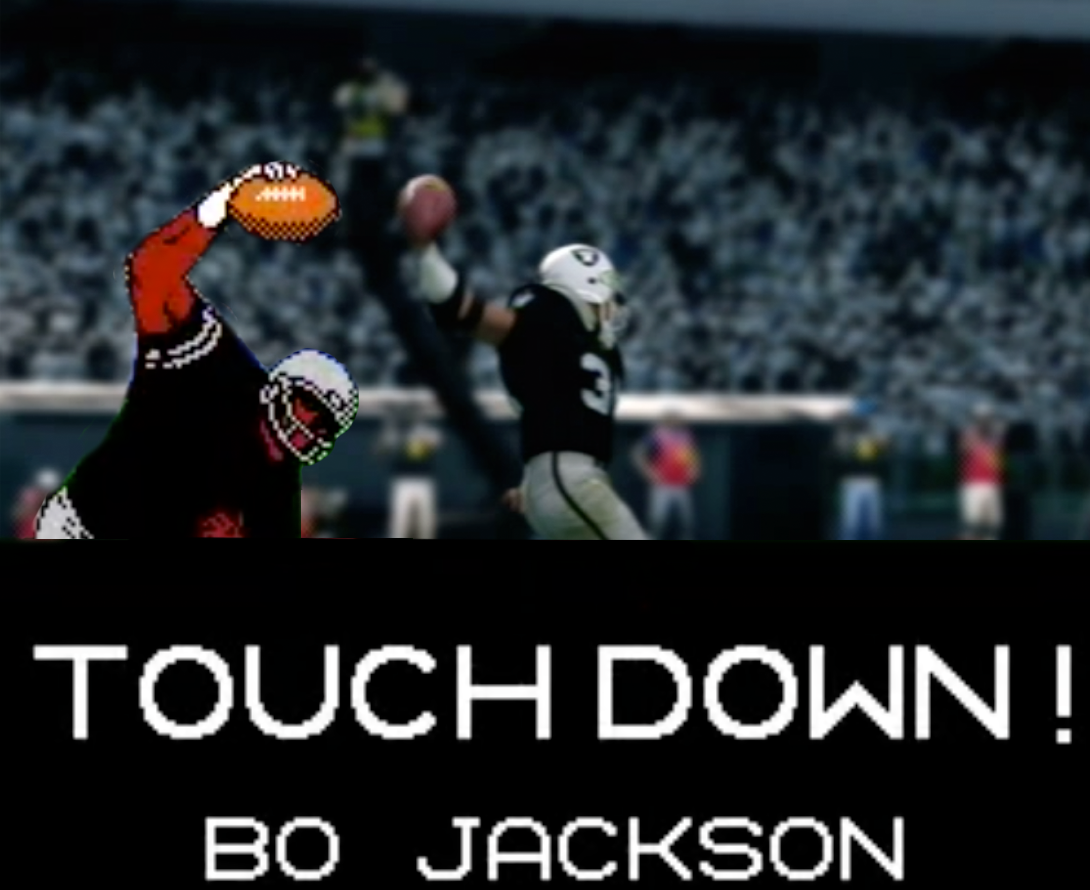 Tecmo Bowl Bo Jackson remains the greatest athlete in the history of gaming. In this episode of Breaking Madden, Bo wrecks havoc in the present day.

Since they traded away their 2014 first-round pick to the Rams in exchange for the rights to draft Griffin two years ago, the Redskins have absolutely zero motivation to lose this year. Not that any team has a whole lot of motivation to lose ever (the fans might, the owner might but the players usually don't), but it stings even worse that with every loss, Washington's pick gets closer and closer to being in the top three.

It seems like it will probably be even closer after Monday.

Though the Niners have lost two in a row, the Saints and Carolina Panthers are two of the hottest teams in the NFL, and San Francisco lost by a total of four points. All four of the 49ers' losses this year have come to playoff teams, and the Redskins aren't one of those.

It shouldn't be hard to imagine that the 49ers will be able to win this one with some ease.

The 49ers are 5.5-point favorites, according to Odds Shark.

Both teams have divisional matchups in Week 13. The Redskins are scheduled to head home and take on the New York Giants at 8:30 p.m. ET on Sunday Night Football.