Share All sharing options for: The Post-Mortem, Week 12: Indianapolis is now hiring!

It is only appropriate to begin this week's Post-mortem with an expression of thankfulness. Specifically, we are thankful for Pro Football Reference, which allows us to dig up obscure statistics and streaks and factoids, helping us disguise our ignorance in snark. Thank you, Pro Football Reference. You've done so much to advance the field of Shaming The Oakland Raiders.

Time of Death: The Browns could have made it a one-score game midway through the third quarter, but Jason Campbell lost the ball on a sack and the Steelers ran it back to the Cleveland 4-yard line, scoring on the next play.

Cause of Death: Campbell's fumble was but one of four Cleveland turnovers, and the defense wasn't able to counter with any takeaways of their own. Part of why the Browns were able to start 3-2 was by winning the turnover battle (or at least not losing it badly), with a plus-1 margin over that stretch. And part of why the Browns have gone 1-5 since then is that their turnover margin has plummeted to minus-7 in those six games. At least they're tanking again? I guess?

Time of Death: Matt Stafford's fourth interception was arguably the one he bore the least responsibility for, but, man, did it come at a bad time -- an incomplete pass would have given the Lions a chance at a 45-yard field goal to tie the game with less than a minute to play.

Cause of Death: Stafford only has three other career games with four picks, two of which were in his rookie season. Since 2000, only nine quarterbacks have thrown four interceptions in a game and won, and one of them was Rex Grossman. So yeah, it's probably better to lose than to be on a list with Rex Grossman.

Time of Death: The final seconds of a game can so frequently be lackluster. A kneel down, a meaningless pass attempt, a bunch of players milling around rather than running another play -- it's all anticlimax. The last play of this game wasn't exciting in its execution, but, oh, the result. A TIE. A beautiful, hilarious, misshapen tie. You're both losers here, Vikings and Packers, so you'll both be dissected.

Cause of Death: What does it take to blow a 16-point lead in the fourth quarter? If you're the Vikings, nothing particularly exotic like a pick six or a muffed punt. No, you just get out-gained 173 yards to 34 and gain less than three yards a play after taking that lead.

And how do you find yourself having to mount that comeback in the first place? That's also pretty simple: the Packers just had to go 3-for-16 on third down against a defense that had been allowing opponents to convert 49.7 percent of the time, last in the league.

So congratulations. You both deserved to not win, and you didn't. Never say a tie game isn't meritocratic.

Time of Death: With 30 seconds to play, Philip Rivers threw a 26-yard touchdown pass to Seyi Ajirotutu, who hadn't hauled in a score in three years (or four Rivers children, depending on which system of measurement you use).

Cause of Death: It may have been the product of Tamba Hali and Justin Houston leaving with injuries in the first half, but Kansas City's pass defense evaporated in the second, as the Chargers exploded for 262 yards, two passing touchdowns, and 13.1 yards per passing attempt in the final two quarters. Sack production has dropped off remarkably for the Chiefs; through seven games, Kansas City had 10 more sacks than any other team, but in their last four games, the Chiefs only have two, the lowest total league-wide in that time span.

Time of Death: 7:15 in the fourth quarter might seem too early to call for an onside kick when you're only down six, but it may have been the higher-percentage play for Chicago, who instead kicked away and couldn't stop the Rams on a seven play, 80 yard touchdown drive.

Cause of Death: Thanks to a penalty, St. Louis actually ran for 90 yards on that drive, because they recognized an unusual defect -- the 2013 Bears were born without a run defense. Currently last in the NFL in total yards allowed on the ground and third-to-last in yards per carry yielded, Chicago's only 31 yards away from their worst season stopping the run since 2009.

Time of Death: Mike Wallace nearly caught a last-second bomb from Ryan Tannehill, but was distracted by the invisible lasers coming out of Mike Mitchell's eyes, via Charles Trainor: 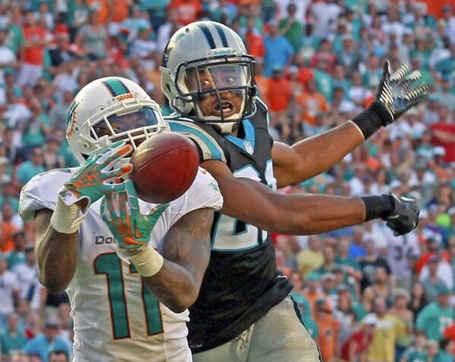 Cause of Death: The Dolphins struggled to run the ball all day, but they were especially terrible on first down, where they only gained 21 yards on 13 attempts. Four of those were in the second half, and they gained a collective ... zero yards. How very Florida of the Dolphins to need racism to play well.

Time of Death: Just before the end of the third quarter, Baltimore ruined what had been a perfectly family-friendly Field Goal Showdown by throwing a 66-yard touchdown to Jacoby Jones.

Cause of Death: The Jets went three-and-out on seven of their 13 drives and now lead the league in that category, and if you can name three things about this offense that you think are pretty good you are suuuuuuuuuuuuuuuch a liar.

Time of Death: Once this happened before the game:

Cause of Death: In the 43 games comprising this season, 2012, and 2011, the Jaguars have only finished five other games without a turnover. It is a rare and beautiful flower, the Jacksonville No-Giveaway. Cherish it.

TIme of Death: Kendall Wright's touchdown with 10 seconds left killed the dream of "Matt McGloin, QB Who Wins His First 50 Starts And, In So Doing, Destroys The Concept of Rookie Scouting."

Cause of Death: Oakland allowed the Titans to convert 10 third downs, seven of which were third-and-7 or longer. Ryan Fitzpatrick went 6 of 8 for 90 yards and ran three times for 21 yards on those long third downs, and no seriously Oakland that's what you let RYAN FITZPATRICK do to you.

Time of Death: When Karlos Dansby ran an interception back 22 yards for a score to give Arizona a 21-point lead, he was the leading receiver for the Colts. That didn't last the whole game, but Dansby just isn't getting the targets he deserves in the Indianapolis offense.

Cause of Death: In six of his seven games before injury, Reggie Wayne had at least 50 yards receiving. In the four games since Wayne was lost for the year, an Indianapolis wide receiver has only gained 50-plus twice -- T.Y. Hilton against the Rams and the Texans. Andrew Luck's current progression looks like this:

Time of Death: Dan Bailey's 35-yard field goal as time expired put the Cowboys on top of the NFC East. Congratulations! You're king of the NFL soup kitchen!

Cause of Death: New York's running attack had its most productive game of the year, but they let down in one key area -- inside the Dallas 40-yard line, where the Giants ran seven times, but only picked up 14 yards. That forced the Giants to kick two very short field goals in response to Dallas touchdowns.

You're thinking it, and I'm thinking it -- Tom Brady smoked PCP at halftime.

Time of Death: Washington recovered a fumble in San Francisco territory early in the second half, but promptly went three-and-out, and the Niners scored on their next possession.

Game of Death: RGIII was sacked four times in the second half, but if you watched the game it felt like 14. That's on Griffin, though, because a real leader would block for himself.