The Cardinals and 49ers still have a Week 17 duel on the schedule, but after 12 weeks, it's the 49ers in position to go to the postseason.

Share All sharing options for: NFL playoff picture 2013: 49ers bump the Cardinals out of the final wild card spot

With several divisional matchups remaining in the final five weeks of the season, the race for the postseason hasn't been decided for any teams, although the picture is slowly becoming clearer. Through Week 12, no team has clinched a postseason berth yet, although it's possible that some spots could become secure in Week 13.

Here's a look at what the playoff matchups would look like if the postseason started tomorrow.

The Colts have certainly looked shaky as of late, losing by wide margins to both the Rams and the Cardinals in Week 10 and 12, respectively; however, it's hard to imagine them dropping the top spot in the AFC South with the Titans, Jaguars and Texans all limping down the stretch.

With Jake Locker in the lineup, the Titans likely would be primed to compete for the division title. In seven starts, he earned four wins, but without Locker starting, the Titans are just 1-3. They have a tough three-game stretch against the Colts, Broncos and Cardinals to attempt to turn that around.

The Chiefs could be in control of the No. 1 seed in the AFC after the Broncos dropped their second game of the year, but the Chiefs instead lost their second consecutive game in Week 12. Still, they'll have a chance to bounce back and grab the top spot with a Week 13 game against the Broncos, though they'll still be comfortably in control of the No. 5 seed even with a loss.

Cincinnati has a two-game lead over the Steelers and Ravens and had a Week 12 bye to recover for a five-game postseason push. With scheduled games against both Pittsburgh and Baltimore still ahead, the Bengals can lock up a playoff spot with victories or jeopardize their place with losses.

With a 5-6 team in line to make the postseason, just about every team in the AFC is still in the hunt. Even the Texans and Jaguars are only three games out, although the Steelers, Ravens, Chargers, Jets and Dolphins all sit at 5-6 as well.

The lead for the Seahawks atop the NFC shrunk to one game during their bye week, as the Saints earned a Week 12 victory, although Seattle are now the only one-win team in the NFL following losses for both the Broncos and Chiefs in the AFC. 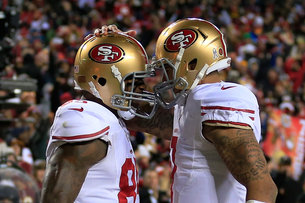 Detroit lost in Week 12, but lucky for them, no other team in the NFC North earned a victory either, as the Bears dropped a game to the Rams, while the Vikings and Packers tied. With Chicago and Green Bay each relying on backup quarterbacks, the Lions just need to hold the two teams off and they'll have a spot in the postseason.

The only difference between the playoff picture on Monday morning and Tuesday is the addition of the 49ers to the fold, after they earned a decisive victory over the Redskins on Monday night. With a Week 17 game against the Cardinals still on the docket, the race is far from decided.

The Cowboys put a stop to the winning streak of the Giants on Sunday, but the surging Eagles might be more concerning. While Dallas has the tiebreaker thanks to a Week 7 victory, the NFC East title could come down to a Week 17 matchup between the Cowboys and Eagles in Dallas.

Carolina couldn't inch a game closer to the Saints for the NFC South title, but they did continue their winning streak that has them now comfortably in the top wild card spot. With two remaining matchups against New Orleans in their last five games, the Panthers will have their chance to grab the division throne for the first time since 2008.

The Cardinals now sit on the outside looking in after a Week 12 win for the 49ers gave them the boot. However, they still sit ahead of the pack and can improve that more with a road win against the Eagles in Week 13. The Eagles are tied with Bears at 6-5, one game behind the Cardinals for the sixth seed.