Josh McCown, Marc Trestman save Bears from the dregs of a one-sided rivalry

The Bears had no business winning in Lambeau Field on Monday night, but they got it done thanks to an inspiring effort from their rookie head coach and backup quarterback.

Share All sharing options for: Josh McCown, Marc Trestman save Bears from the dregs of a one-sided rivalry

The Bears and Packers have been playing meaningful football games since 1921. The Bears actually hold a 93-88-6 (six!) advantage all-time. But over the last two decades, Bears-Packers has been more like a fight between brothers that ends with the younger one trapped in a figure-four leg lock, crying helplessly and cursing his birth year. The Bears can talk about the importance of Packers week and its historical significance all they want; inevitably, things end with Chicago feeling beaten physically, mentally and emotionally. These truths are irrefutable.

Since Brett Favre made his debut for them in 1992, the Packers have started three different quarterbacks. The Bears have started 26. While Jay Cutler has been resigned to working with a new offensive coordinator in four of his five seasons in Chicago, Aaron Rodgers has been with Mike McCarthy and Tom Clements his entire career. While the Bears shuffle through the aftermath of multiple botched draft classes that marked the end of Jerry Angelo's tenure in Chicago, the Packers boast a roster in which 50 of their 53 players have only played for Green Bay.

A year ago, heading into their Week 2 game in Green Bay, Cutler wished the Packers' secondary "good luck" after torching the Colts in the season opener. He went on to throw four picks, get sacked seven times and turn himself into a nationwide talking point for screaming at incompetent left tackle J'Marcus Webb on the sidelines. It was the perfect encapsulation of everything Bears-Packers has been about recently: get your hopes up only to be thrown to the frozen tundra of reality and turned into a nationally televised embarrassment.

This was the context staring the Bears in the face heading into the Week 9 matchup at Lambeau Field, a place they hadn't won since 2007. The Packers had taken six straight matchups, including an NFC title game at Soldier Field in January of 2011. It was a game that had real meaning in the standings, but one the seemed like it was going to have the same result it always does.

And then Aaron Rodgers got hurt on the first drive of the game and all bets were off. The Bears would win, 27-20, thanks to ruthlessly efficient play-calling, the rebirth of a dead-and-buried pass rush and a game for the ages by a backup quarterback.

I have no idea how any of this happened. No one does. But damn if it doesn't feel great. 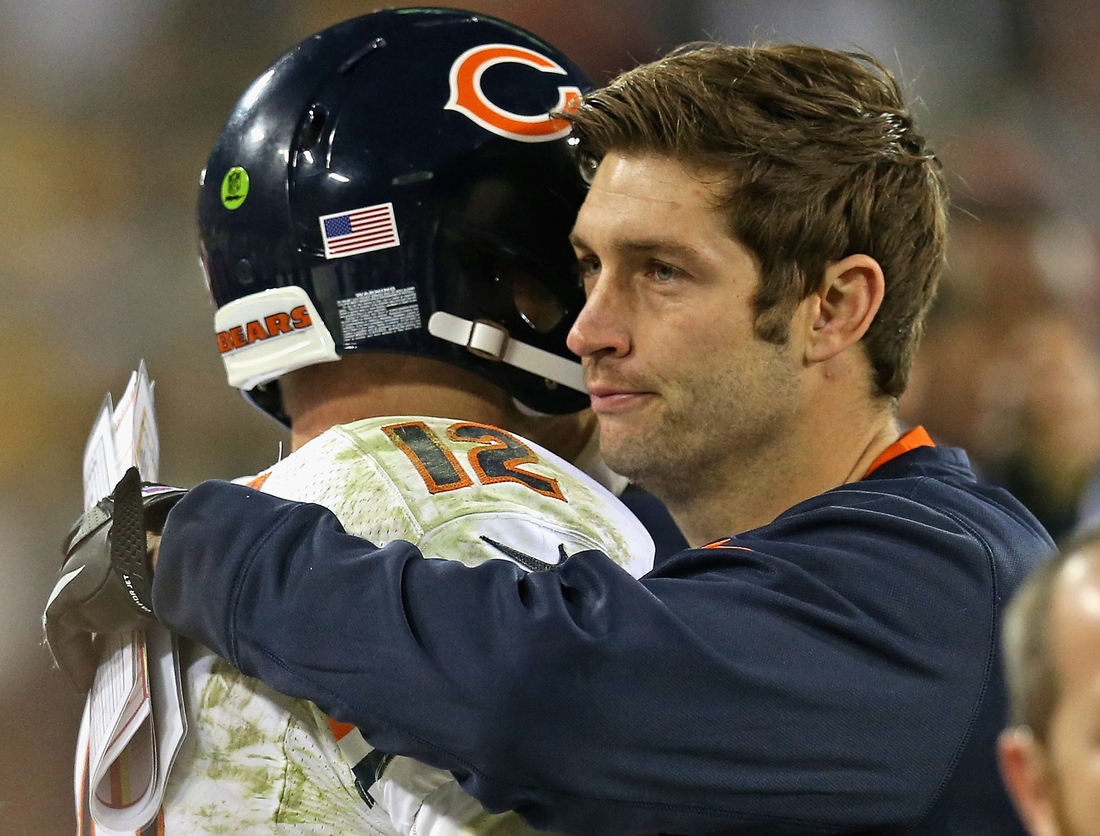 Here are some things you should know about Josh McCown:

McCown looked great the last time the Bears played 24 days earlier, relieving an injured Cutler and nearly leading the Bears to a comeback victory in Washington. But because he was a 34-year-old journeyman quarterback and because every Bears backup ever is the worst signal caller imaginable, it stood to reason a dropoff would come, and it would be swift.

Only it never happened. The Bears' offense has now looked even better in its three halves under McCown than it did at any point with Cutler. McCown made all the right reads, didn't force throws into coverage downfield and generally acted like a sage within Marc Trestman's offense. It was remarkable.

"He’s got a lot of energy in the huddle," Bears center Roberto Garza said after the game. "Every now and then we have to calm him down a little because he starts screaming and we don’t want the defense hearing the play."

McCown deserves so much credit, but his success speaks more to the Bears' offensive revival this season than anything. McCown has a few things that Caleb Hanie, Todd Collins and Craig Krenzel before him never did: three huge targets in the passing game, a rock solid offensive line and a seriously brilliant play-calling head coach.

Let's review these one at a time:

The game changed in the fourth quarter with the Bears up by four, facing fourth-and-inches from their own 32-yard line. When the offense took the field, more than one of the long-tenured talking head reporters in this city questioned the call, even if all of the new-age thinking says it's smart to go for it on fourth down. To be fair, this was kind of terrifying, and the thought of pinning Packers backup Seneca Wallace deep and making him drive the length of the field for a touchdown must have been a tempting one.

Instead, the Bears went for it and Matt Forte picked up three tough yards. It was the highlight of an 18-play, 80-yard drive that ate up almost 10 minutes of the clock.

Trestman is a damn genius.

The Bears' season looked over heading into Monday night. Part of me wanted to watch Warriors vs. 76ers instead, because I know how these things always play out. But now the Bears sit in a three-way tie atop the division at 5-3, with Cutler set to return early from injury next week against one of the teams the Bears are tied with, the Detroit Lions.

It's Cutler's team when he's healthy, it has to be. But most thought the 4-6 week timetable given after his groin injury was optimistic in the first place. Now he's ready to come back in three weeks. Would it be the worst thing in the world to give McCown one more start and let Cutler heal up after the Bears have looked so good offensively the last two games?

It's a problem for another day. For now, the little brother has finally risen. Don't toss that to the side for future considerations without taking in how important it feels.

• NFL Debrief: How we learned to love the Jets