Share All sharing options for: The road to 0-16: Jaguars, Buccaneers chasing infamy

The midway point of an NFL season is a good time to stop and take stock at where we are and where we thought we'd be, two places which are never symmetrical thanks to injuries, luck, and the general limited powers of human prediction. The NFC East is highly competitive (though not in the way we thought it would be), the AFC North is almost a perfect inverse of its usual order, and Kansas City remains at the top of the heap. It's a weird year, but chances are your team has had at least one good week so far.

Unless you root for the Bucs or Jaguars, of course, the only teams sitting at 0-8 today. Other teams had lousy starts as well - the Steelers and Giants leap to mind - but 0-8 is something special. For one thing, it guarantees that your best case scenario is a .500 finish. More importantly, it means the specter of 0-16 begins to take shape - and since Tampa and Jacksonville don't play each other, there is that rare possibility that both teams go winless.

But let's not get ahead of ourselves. Though a perfectly imperfect season may be in the future for either the Bucs or Jags, we must first ask:

How Did We Get Here?

0-8 for the Tampa Bay Buccaneers has been the product of a series of painful blown leads. The Bucs were winning at some point in six of these contests, and held a lead entering the fourth quarter in three of them. Tampa's opponents in the first half of the season currently have a combined record of 39-27, so it wasn't an easy start, especially with road games in Seattle and New England.

Jacksonville, by contrast, has not been the victim of poor late-game play, as the Jaguars only held a lead in three of their eight games and hasn't been ahead at halftime, much less the end of the third quarter, in any week. The teams they've already played are a whopping 46-21 combined, as Jacksonville was tasked with facing Seattle, San Francisco, Kansas City, and Denver.

And Who's Been Here Before?

Since the NFL expanded the schedule to 16 games in 1978, only one team (the 2008 Lions, but you knew that) has finished the season without a win. 26 teams have started the year 0-8, however, including an amazing streak in the early 1990s where the Bengals hit 0-8 in three out of four seasons. Most of those teams didn't stay empty in the wins column; 11 won their ninth game, only four still had a shot and 0-16 by the time they got to game thirteen, and teams that start 0-8 have averaged 2.3 wins for the year. Game 15 is the latest any team has picked up its first win of the season.

If history is any guide, that suggests Tampa and Jacksonville could be out of this race in the next month or so.

How Can We Keep It Going?

Tampa is the more beat-up team, however, with 8 players (including a starting wide receiver) on injured reserve, the starting running back out with a torn labrum, lingering injuries with both starting safeties, and the whole "starting offensive lineman who has MRSA in his foot" thing. And we didn't even mention that they cut their original starting quarterback just for fun. Jacksonville's only put five players on IR so far, though one was first round draft pick Luke Joeckel and Justin Blackmon's recently been suspended for the rest of the season.

So What Lies Ahead?

Tampa's schedule doesn't get a ton easier in the second half, as their opponents are a combined 34-32. The best chances for a win right now appear to be home games against Atlanta in Week 11 and Buffalo in Week 14, though the Falcons should have Roddy White back by then and the Bills will almost certainly be starting someone other than Jeff Tuel. A Week 16 road game in St. Louis might look promising, but if the Bucs are 0-14 entering that, there's a real possibility they've fired Greg Schiano and made Dave Wannstedt the interim coach.

The Jaguars do get something of a reprieve in their last eight games, against opponents with a combined record of 29-37. That includes two games against a Houston team that is in serious disarray, a home game against the offensively unimpressive Arizona Cardinals, and two games against a Tennessee team that has looked very up and down at various points this year. 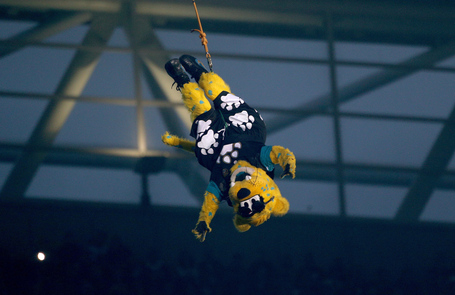 And then there are the incentives - Jacksonville likely didn't enter the season expecting to make the playoffs, while the Buccaneers probably did, but the most either really has left to play for is draft position, especially given the number of intriguing quarterbacks who are likely to be available next May. On the other hand, Schiano may well need a win or two down the stretch to have any chance to save his job, while Gus Bradley would seem to be a safe bet to return next year even if the Jaguars finish 0-16.

It's a hazy outlook. The Bucs appear to be the more talented team (one would hope this is true, given that Tampa's payroll is 20% higher than Jacksonville's) but have some major injury issues and a more challenging second half schedule. The Jaguars should have some beatable opponents left, though it's a very real possibility the roster simply doesn't have enough talent to beat anyone. Except the Bucs. They could probably beat the Bucs.

What Should I Want To Happen?

Stats and schedules and roster questions are all well and good, but let's get to the meat of this: what would be the most hilarious outcome? It's not Jacksonville just going 0-16, because all that proves is that bad teams in the midst of a major rebuilding project are bad. And it's actually not both the Jaguars and Buccaneers finishing winless, because then we'll have to wade into some super depressing tiebreaker territory to figure out who gets the first pick.

You know where this is going. In Week 17, the Bucs travel to New Orleans. Imagine them walking off the field after a 27 point thrashing, entering the locker room, turning on a television, and seeing the end of an overtime game in Indianapolis ... where Jacksonville kicks a game winning field goal to go 1-15. That. That's what you want to see.