Nick Foles unexpectedly joined rare company this weekend, now we look at whether it's fair to downplay his achievement in relation to Peyton Manning.

Share All sharing options for: Are 7 touchdowns created equal?

Peyton Manning threw seven touchdowns in the Denver Broncos Week 1 win over the Baltimore Ravens, joining the annals of NFL greats. The talk of the week was how great Manning was, as fans reflected on what he meant to the game. Two months later the luster is gone from the seven-touchdown achievement, eroded by a second-year quarterback that didn't seem to "earn it." Today we look at Nick Foles, his seven touchdowns and whether there's any reason to downplay his achievement.

Two terms to remember in this comparison are "no-huddle" and "shotgun." Every one of the 14 touchdowns thrown by either Manning or Foles came out of the shotgun, or in a no huddle situation. Much is made of Chip Kelly's quick-fire offense and how that helped Foles, but let's not look past the fact Manning threw four of his seven touchdowns out of no-huddle. 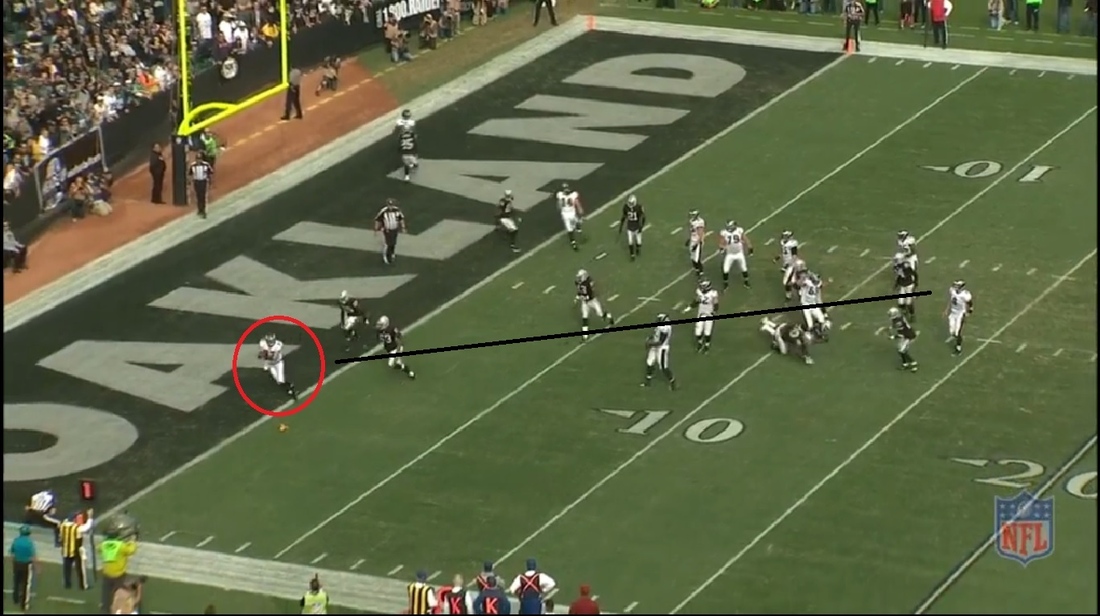 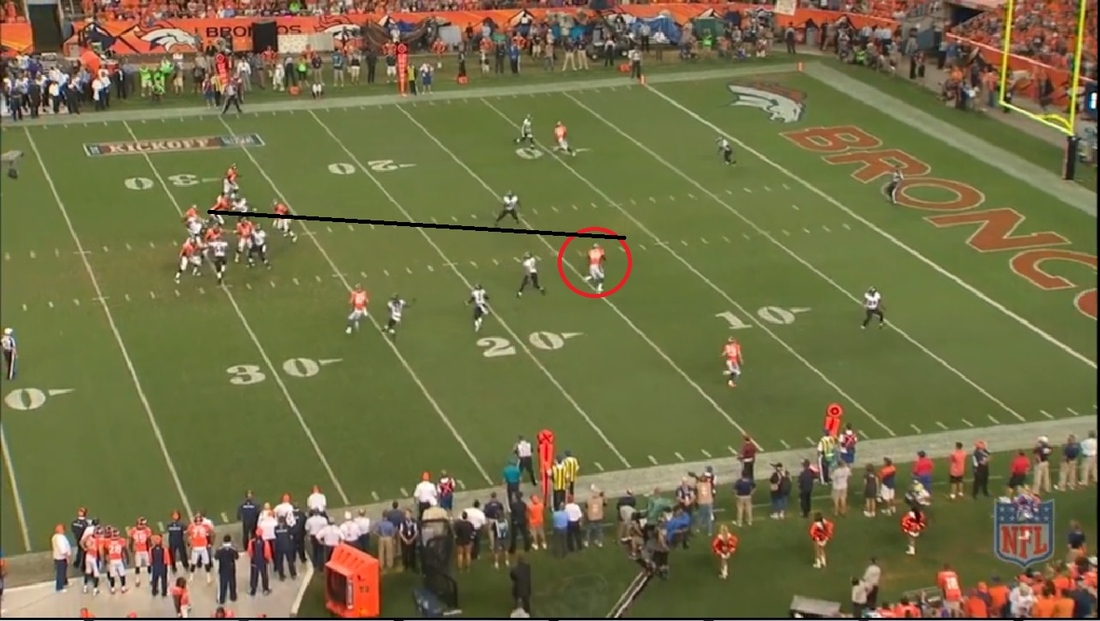 Good quarterbacks know how to exploit matchups, and that's what Foles did. Nobody adequately covered the tight end, and it made this a simple throw on a drag route.

Neither touchdown was particularly difficult, and both went to tight ends but there's no question that Manning's perfect seam route was the better throw. The Ravens didn't position their safeties correctly, but it still required a threaded pass between two defenders, and Manning gets extra points for throwing while being hit. 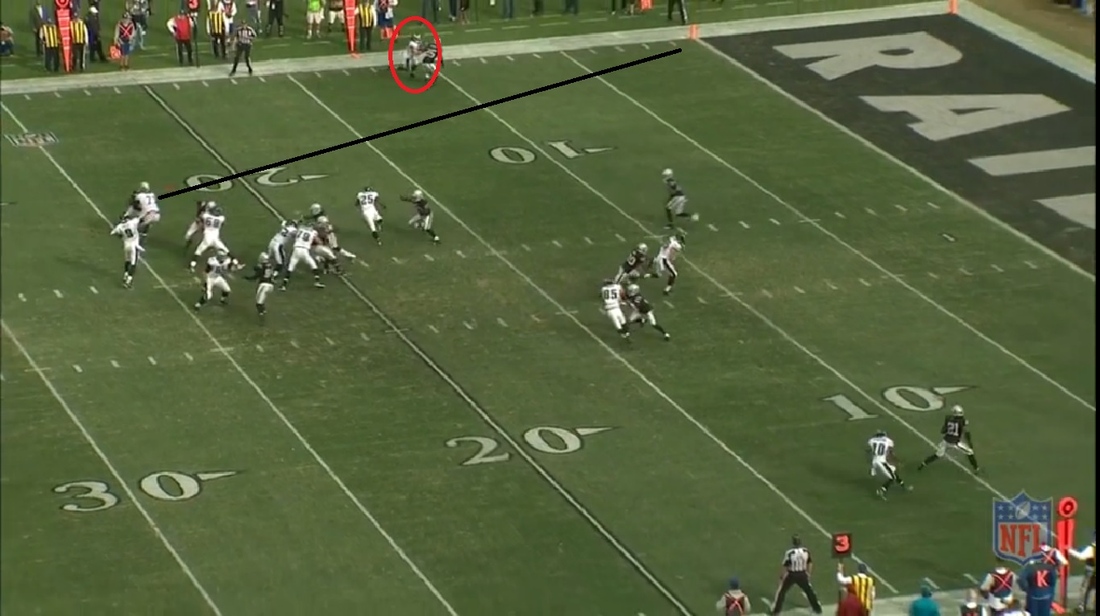 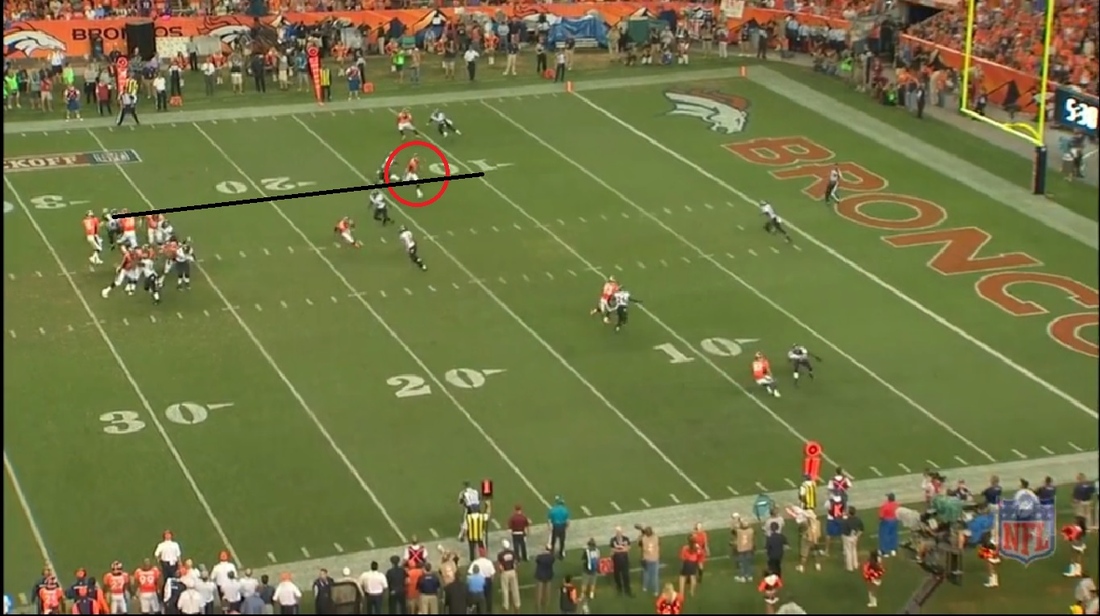 Foles' second touchdown was not an easy pass. It required timing and anticipation on this back shoulder throw that put a lot of trust in Riley Cooper to win his one-on-one matchup. Not every throw was simply Kelly's offense letting Foles make plays.

This was another good seam pass from Manning to Julius Thomas, but it was the exact same play as his first touchdown. Once again there wasn't adequate safety support, and Manning split the defenders and picked up the score. 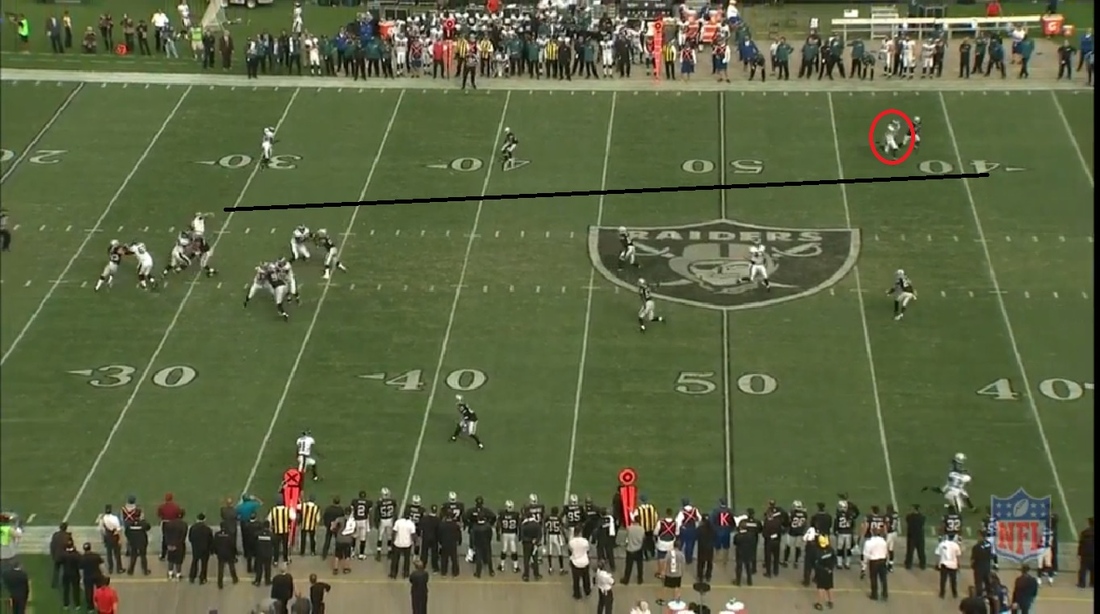 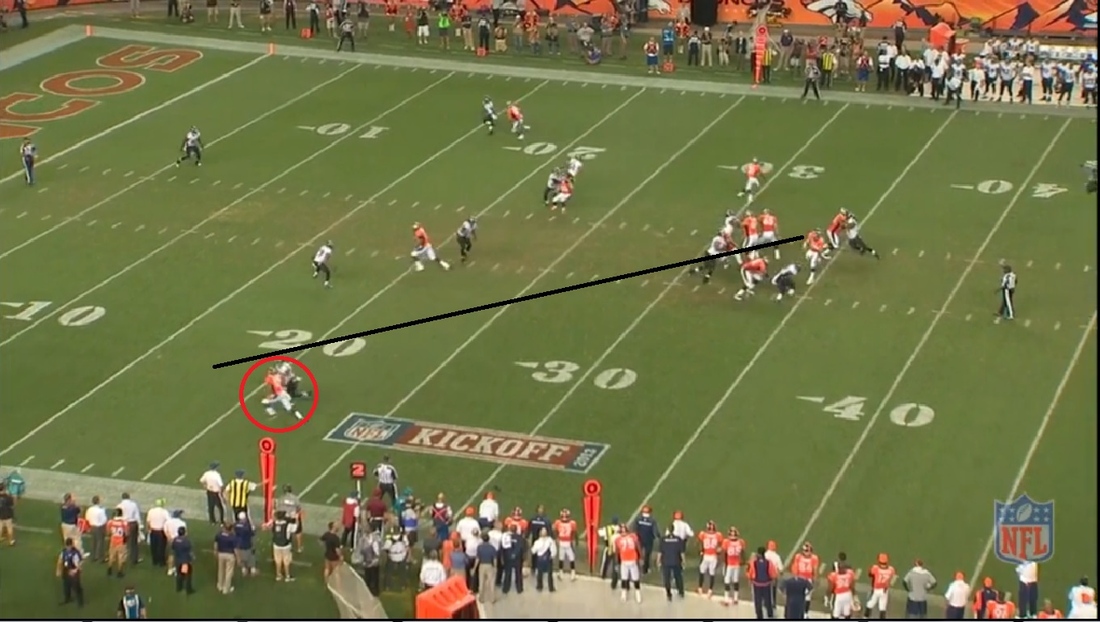 The third touchdown was all about deep passes that were either worked inside or outside. Foles released his pass to Cooper when he saw the safety was beaten and his wide receiver had inside leverage. The pass itself was good, but the play itself was more on the wide receiver to gain positioning that the throw.

This is what separates Manning's pass. It wasn't as deep and didn't look as flashy on the box score, but the timing and placement on this pass was more difficult. 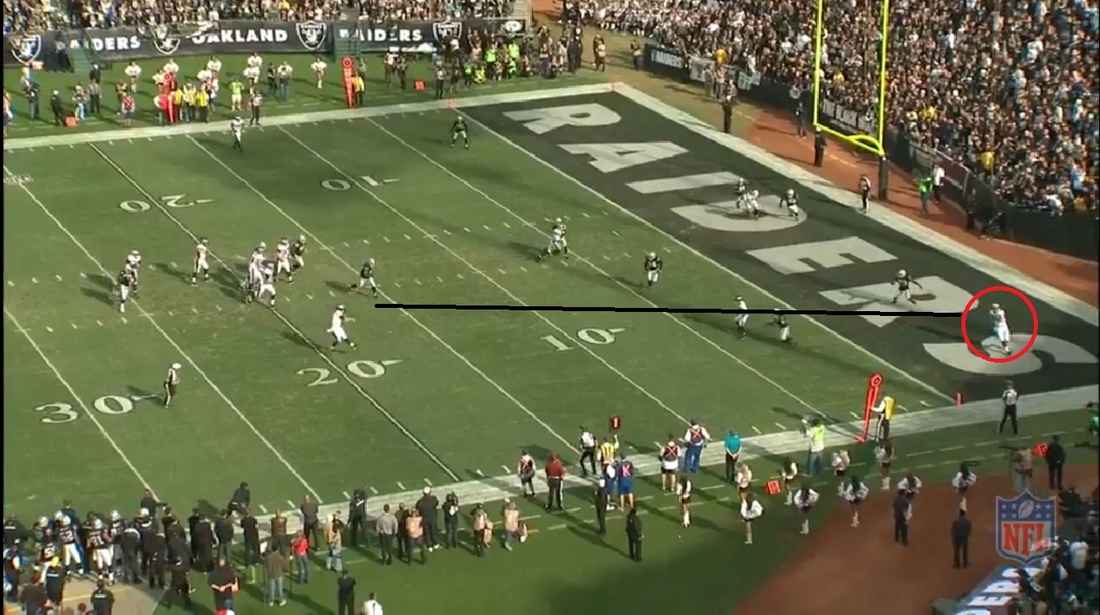 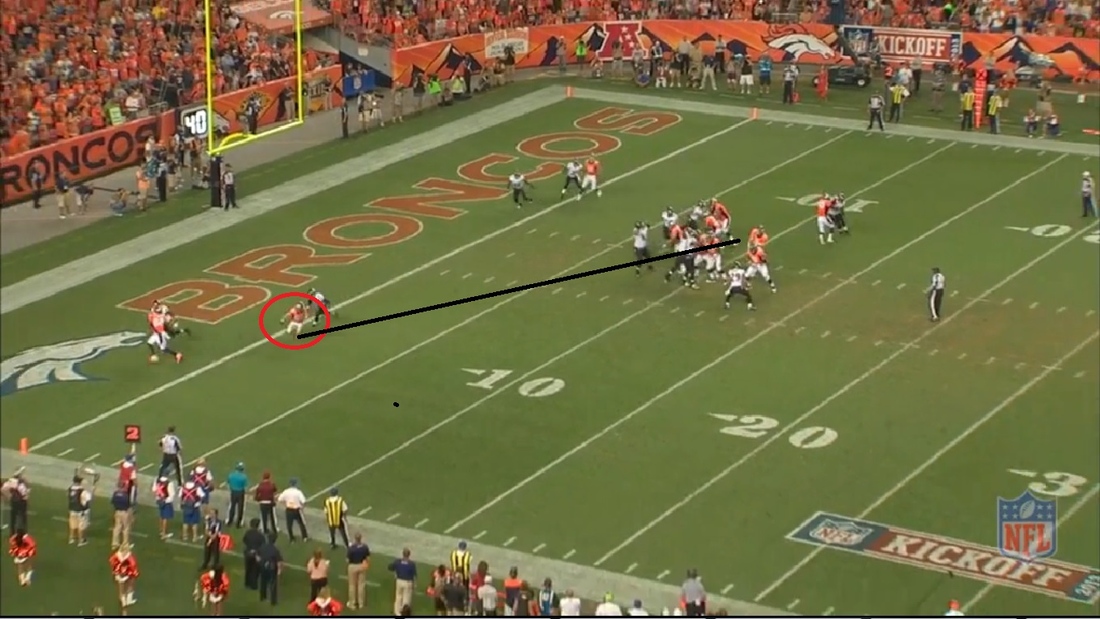 The fourth touchdowns returned to the red zone as both defenses failed to anticipate short routes to receivers. Foles did a good job escaping the inside pressure and flushing to his right. Zach Ertz was able to get behind the linebackers while the Raiders' defense was concerned with stopping Foles if he chose to try and run it in.

Baltimore did a terrible job covering one of Wes Welker's bread and butter plays. The release and drag should always be expected in this situation, but it still caught the defense off guard. It resulted in two defensive backs being stuck on the right side of the field while there weren't enough players to cover Welker.

The point go to Philadelphia here, only because the play took a lot more point and pocket awareness from the quarterback. 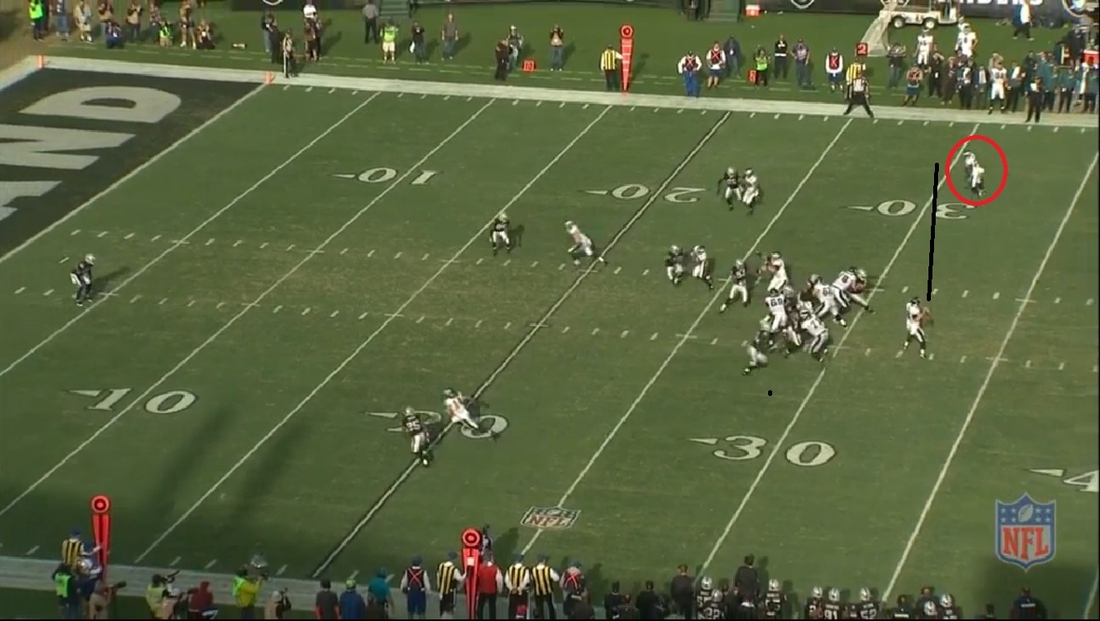 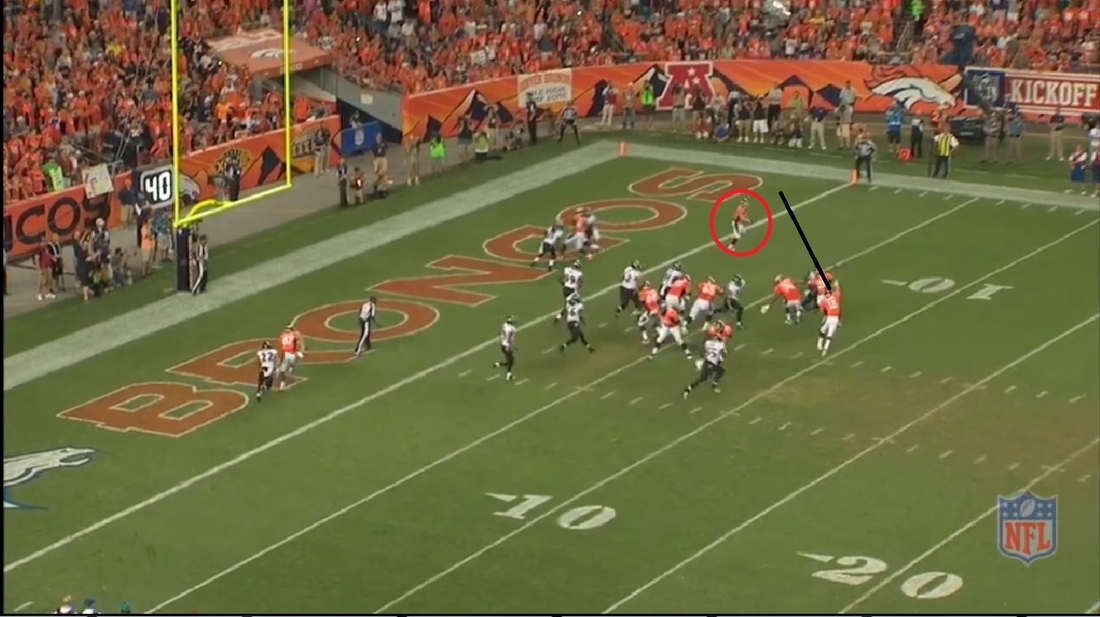 Neither player had a difficult time here. Foles had a simple play to execute as LeSean McCoy moved across the formation pre-snap and was wide ope for an easy touchdown. The Raiders were out of position, and this pitch and catch was one of the simplest plays of the day.

Life wasn't difficult for Denver either. For the second time Manning was able to run the exact same play and have success. Earlier he went to Julius Thomas on back-to-back touchdowns, this time it was another Welker drag route. Coverage was even worse on the second play, where nobody was around.

Neither touchdown was difficult; both quarterbacks did what it took to get the score. 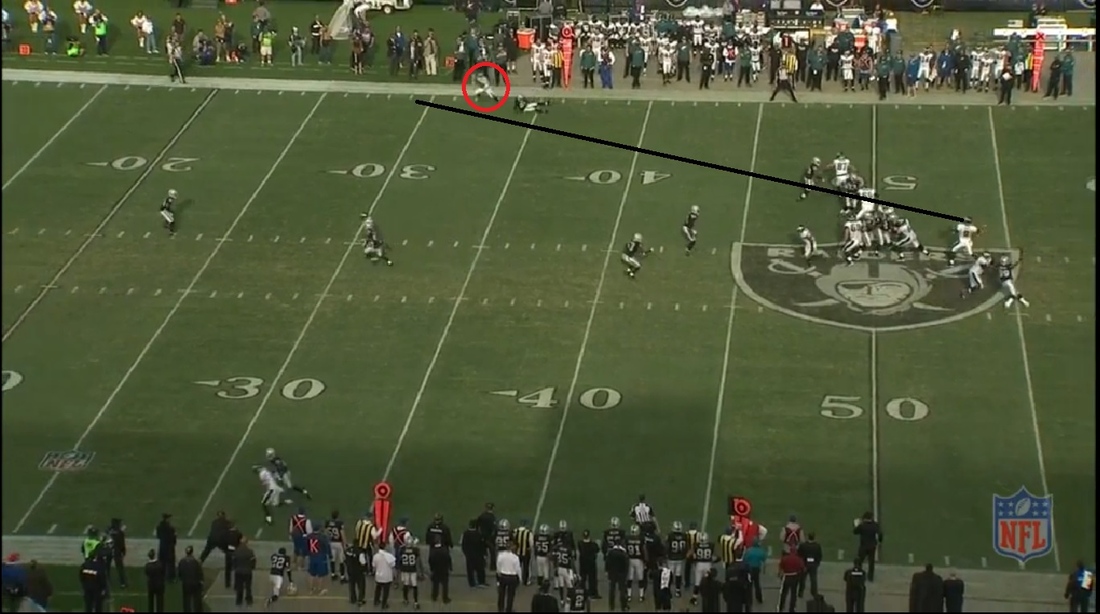 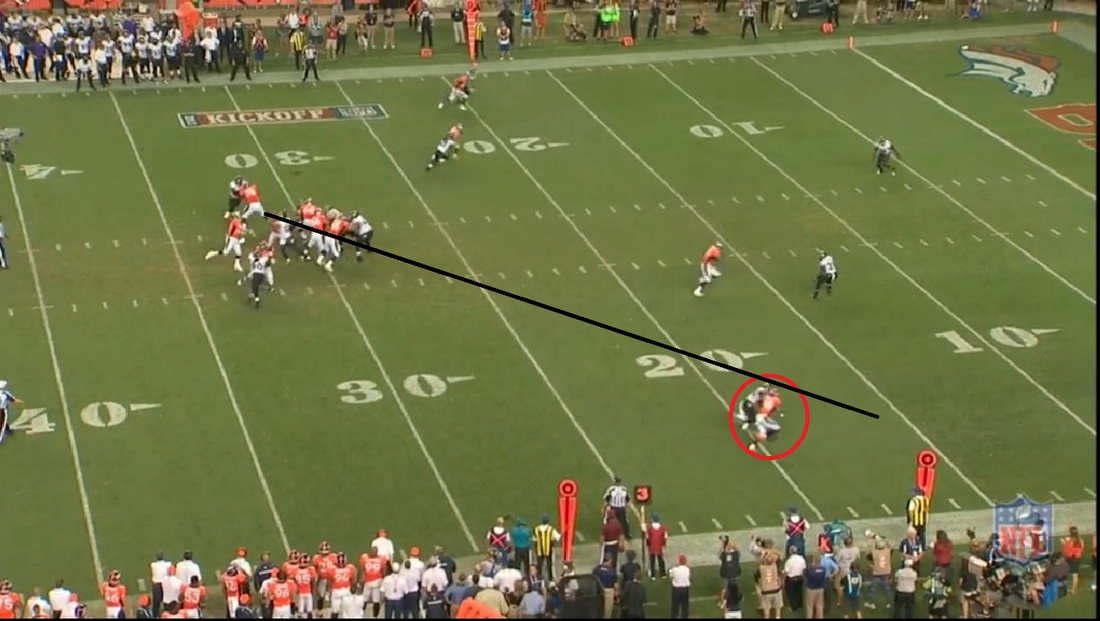 Both the Eagles and Broncos kept going back to the well during this game. It shows how an offense can generate seven passing touchdowns -- find the bad matchup and exploit it over and over again.

Touchdown six was a simple ball from Foles to an uncovered DeSean Jackson after the defensive back lost his footing and fell down. Jackson already had the step on the cornerback, but this left him completely uncovered to run the length of the field for the score.

It was a very similar offensive concept from both teams, but Manning made the more difficult throw into coverage. It was another back shoulder pass similar to the one he threw to Caldwell earlier in the game, and the veteran quarterback understood this was the favorable contest. 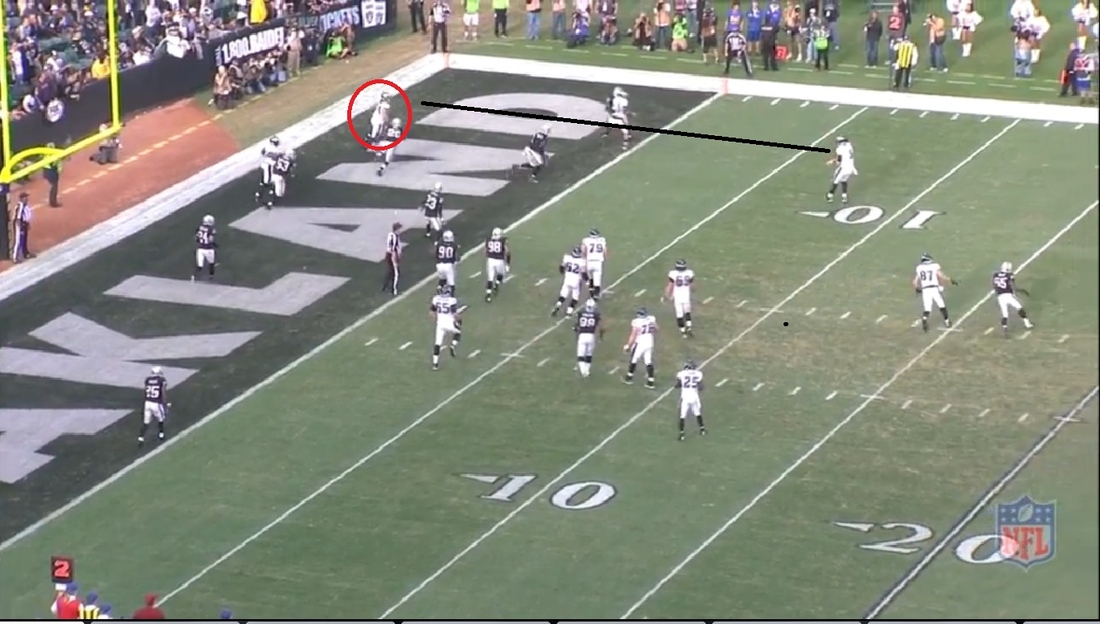 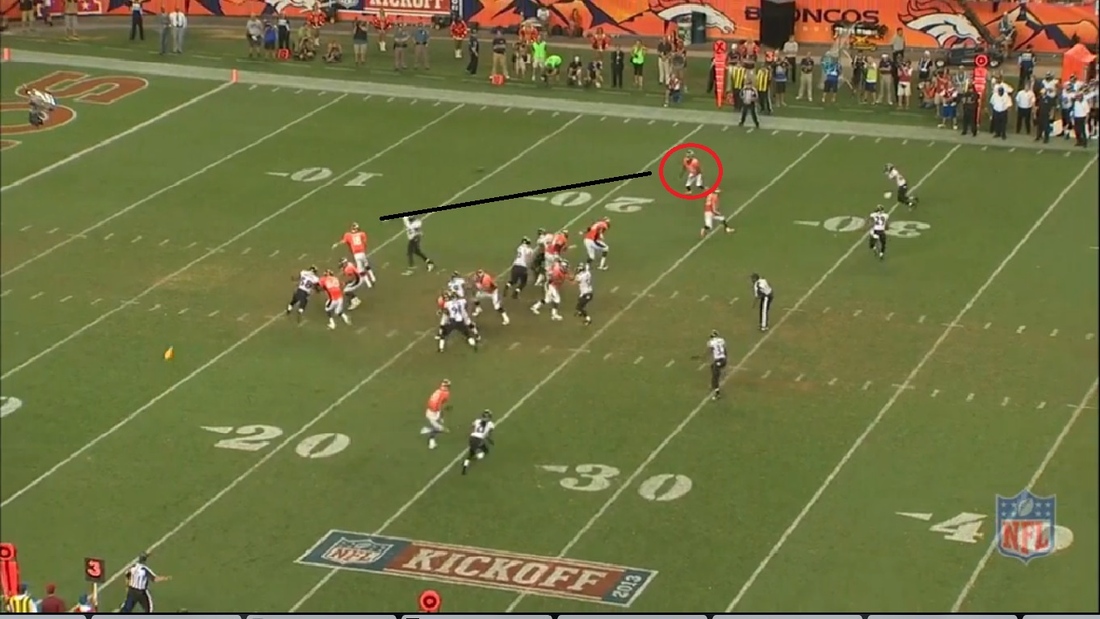 Stop me if you've heard this before. An Eagles receiver got behind the Raiders defense, while they where afraid of Foles running it in. Beautiful in its simplicity, it's also hilarious Oakland was this concerned of Foles' legs. In any event, he still held the ball until Cooper was free in the back of the end zone, and took advantage.

Manning's final touchdown was a curious one. It was a wide receiver screen that was a near disaster because of how much pressure the Ravens brought off the edge. He was able to get the ball out and find Demaryius Thomas who had and easy run into the end zone when the blocking was set.

In terms of which player had the more difficult seven touchdowns we're split. Three passes from Foles were better, three from Manning were better and we were split on one.

Ultimately we see a total of 14 touchdown passes all coming from very similar offensive principles. Work out of the shotgun, get one-on-one matchups and leverage your strengths at the goal line. These ideas aren't changed because one player is a 14-year veteran and one is an NFL sophomore; both games were extremely impressive.

Is Manning the better quarterback? Yes. For his body of work and everything that makes Manning one of the NFL's greats he is superior. But on one afternoon when the league record for touchdown passes was tied, Foles might as well have been Manning, because he played exactly like him.

• NFL Debrief: How we learned to love the Jets