The Broncos and the Texans have both had to install interim coaches this season when their head coaches fell ill. So how does every team's likely interim coach stack up? Robert Wheel investigates.

NFL head coaches are a group of middle-aged men who work interminable hours in high-stress situations. So it shouldn't surprise anyone that John Fox needed a heart valve replaced and Gary Kubiak had a mini-stroke over the past week. Any team could have to resort to an interim coach mid-season when a coach becomes incapacitated. Accordingly, here is a ranking of each team's likely interim coach.

Likely interim coach: Ken Whisenhunt. He took the friggin' Cardinals to the Super Bowl. Anyone who watched that team in the '90s is amazed that Whisenhunt wasn't named coach-for-life after that. His Achilles heel in Arizona was his inability to find a passable starting quarterback, but Philip Rivers often rises to the level of passable.

Likely interim coach: Mike Zimmer.  ZImmer's coached some excellent defenses during his tenure in Cincinnati and has been a candidate for numerous head coaching vacancies.  Depending on how you feel about Marvin Lewis, this could be an upgrade.

Likely interim coach: Pep Hamilton. No Colts assistant has head coaching experience, but Greg Manusky was fired from his last job while Hamilton had to get pried away from Stanford. Hamilton helped architect the offenses that Andrew Luck has thrived in, so hopefully the Colts wouldn't experience too much of a drop-off from Chuck Pagano

Tier 2: Not as bad as you remember

Interim coach: Jack Del Rio. It's easy (and fun) to make fun of a head coach who once accidentally chopped his leg with an axe. But if you look at how Jacksonville has struggled since he left his 68-71 mark there looks downright heroic. Besides, as Jim Caldwell showed, it's easy to look good as a head coach when you have Peyton Manning calling the shots on offense. 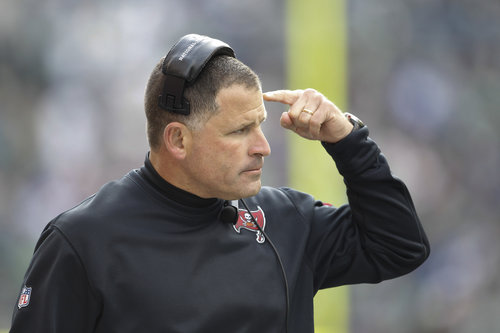 Likely interim coach: Mike Sherman.  Considering Joe Philbin had no idea about his toxic (and litigation prone) locker room, Sherman might actually have to take the reigns in Miami this season. Sherman went 57-39 in six seasons in Green Bay, including four playoff appearances. His tenure at Texas A&M took some of that luster off, where he only went to one bowl in four seasons and Kevin Sumlin took the team to national prominence the year after Sherman was fired. Nevertheless, Sherman's a better coach than most potential interims.

Interim coach: Wade Phillips. Poor Wade Phillips. When he's a coordinator he's an eminence grisee that turned the Texans defense into a playoff-caliber squad. But the second he takes over as head coach he blows a lead and looks like a grown-up verison of Butters Stotch. Still, Phillips has an 82-59 record as a head coach, so he shouldn't be the reason Texans fans lose hope.

Likely interim coach: Gunther Cunningham. Scott Linehan has head coaching experience too but Cunningham is the likely choice as he's the assistant head coach. He went .500 as coach of the Chiefs more than a decade ago, so hopefully the 67-year-old would be a capable interim.

Likely Interim Coach: Tony Sparano. Sparano actually did a decent job in Miami until owner Stephen Ross undercut his authority by interviewing Jim Harbaugh then denying that he ever interviewed Harbaugh. And, to the best of our knowledge, Richie Incognito didn't send any racist texts while Sparano was coach.

Likely interim coach: Norv Turner. NORV! Defensive coordinator Ray Horton would probably be a better choice considering he's gotten two of the most hapless franchises in the NFL to play great defense in the past two years. But Norv has experience as a head coach so he's likely seen as a steadier hand. And while Turner has a 114-122-1 career record his longevity indicates that he was at least able to do something right in Washington, Oakland and San Diego.

Tier 3: Former interims who've got this under control

Likely interim coach: Joe Vitt. The ideal interim coach considering he was an interim for the team last year and didn't make a total ass of himself. Besides, if there's one thing they love in New Orleans it's a repeat offender.

Likely interim coach: Emmitt Thomas. Kansas City's org chart contains four men (Thomas, Bob Sutton, Brad Childress and Gary Gibbs) with head coaching experience. But Thomas was the only one who had to take over as interim coach of an NFL in the middle of a season. And having to pick up the pieces after Bobby Petrino left in Atlanta should have him prepared for just about anything.

Likely interim coach: Aaron Kromer. Kromer went 2-4 as the interim interim coach during Sean Peyton's scheme to get the Saints to beg him to never leave again. Much like Thomas, he gets points for dealing with a near-impossible situation in the past, as his record doesn't really indicate anything because the sample size is so small.

Likely interim coach: Jim Tomsula. He already had to spell Mike Singletary when he was fired with one game left so you figure Tomsula would take over again even though offensive coordinator Greg Roman is a hot head coaching candidate.

Just don't keep him after the season and you'll be fine.

Likely interim coach: Mike Singletary. The Vikings linebackers coach/special assistant to the head coach is best remembered for his disastrous 2010 in charge of the Niners, but in 2008 he took over for the hapless Mike Nolan and went 5-4 as interim head coach. Just don't keep him after the season and you'll be fine, Vikings.

Likely interim coach: Tom Cable. It's hard to oblige Cable for doing a mediocre job in the last days of Mad King Al, as he went 4-8 as an interim and 13-19 as permanent head coach. His record of punching assistant coaches isn't ideal but if he can clean up after Lane Kiffin he can probably handle whatever the Seahawks throw his way.

Likely interim coach: Mike Pettine. The Bills are one of the few teams that doesn't have any assistants that are either a former head coach or a rumored head coaching candidate. Offensive coordinator Nathaniel Hackett is still best known as the son of USC flameout Paul Hackett so it goes to Pettine by default. He helped put together some great defenses with Rex Ryan on the Jets but he's not on too many radars for a head coaching gig.

Likely interim coach: Tom Moore. Nobody on the Cardinals staff has any prior head coaching experience at the NFL or FBS level. So 74-year-old Tom Moore, the assistant head coach who came out of retirement, would probably take over until the offseason. It's a good thing the Cardinals don't have any primetime games left, because his bedtime is 8:00.

Likely interim coach: DeWayne Walker. Neither Jags coordinator has head coaching experience but defensive assistants Mark Duffner and Walker do. Walker's came more recently, though. Sure, it was at New Mexico State, but New Mexico State is basically the Jacksonville of the Football Bowl Subdivision.

Tier 5: Maybe they won't screw up too badly

Likely interim coach: Dom Capers. On the bright side, leading two expansion teams should be ample preparation for coaching a team with Seneca Wallace at quarterback.

Likely interim coach: Mike Shula. His tenure at Bama was still better than Mike DuBose's, so there's that. Still, if you ask any Crimson Tide fan how Mike Shula would ever become head coach again they'd say it'd be a Gerald Ford-type situation.

Likely interim coach: Todd Haley. We've gotten to the "was a disaster as a head coach" portion of the list, but at least Haley has an excuse that he had to deal with Scott Pioli's mad dictatorship. He might do better working for the genial Rooney family.

Likely interim coach: Jim Haslett. The good news: he has experience as an interim coach when he took over for Scott Linehan in St. Louis. The bad news: he went 2-10 that year. He's still a better choice than offensive coordinator Scott Evil, though.

Likely interim coach: Jim Caldwell. He was a disaster once Peyton Manning left, but at least he took the Colts to a Super Bowl. And his college coaching record of 26-63 looks pretty OK when you compare it to defensive coordinator Dean Pees's 17-51 mark.

Tier 6: Time to look forward to the draft

Likely interim coach: Mike Nolan. Dirk Koetter would be a better choice but Nolan has experience as head coach in the NFL instead of college so he's likely the interim if Mike Smith leaves midseason. As noted above, Mike Singletary was a step up from him, which is all that you really need to know.

Likely interim coach: Kevin Gilbride. Perry Fewell is a former head coach too but Gilbride has been with the team longer. If you're familiar with my work on Twitter, you'd know I have a low opinion of Gilbride as a play-caller.  But it's easy to forget that Gilbride was also a terrible head coach too. It shouldn't be this easy to find bad things to say about a man who coached two offenses to the Super Bowl since 2007.

Likely interim coach: Josh McDaniels. People learn from mistakes. So if Patriots fans are lucky, McDaniels will just do the exact opposite of everything he did during his tenure in Denver.

Likely interim coach: Marty Morninwheg. Well, at least his decision to kick off in overtime is somewhat defensible with the new overtime rules. Oh, who am I kidding, of course it's not. Morninwheg taking over the Jets would be a perfect storm of ennui.

Tier 7: CROOM! HERE COMES THE CROOM! READY OR NOT, HOW YOU LIKE ME NOW?

Likely interim coach: Sylvester Croom. He's the only assistant with significant head coaching experience, so it looks like the Titans will be caught between the Croom and Tennessee.

• Roth: The overarching mythology of the NFL