QB Watch, Week 10: Can the Packers survive their biggest injury yet?

Everybody knows that Aaron Rodgers will be the starter in Green Bay for the next decade as long as he's healthy, but how many weeks will they be able to go on with his replacement?

Share All sharing options for: QB Watch, Week 10: Can the Packers survive their biggest injury yet?

The year 2013 has perhaps been one of the weirdest years in recent memory for the NFL, from Ray Lewis winning his swan song Super Bowl to off-field incidents, on-field incidents, locker room incidents and performance enhancers. But perhaps no event is bigger on the actual outcome of the season than the injury to Aaron Rodgers.

Green Bay has been mum on the timetable for Rodgers return, either because the Packers don't know or they don't want to say. At 5-3 and now in third place in the NFC North, if they can't win without Rodgers, there will be no reason to rush him back onto the field if they find themselves out of the playoff race when he's ready to return.

With the Eagles, Vikings and Giants ahead on the schedule, Green Bay is definitely looking at a winnable slate before heading to Detroit and facing the Lions on Thursday night in Week 13, but how much of their value is tied to their All-Pro quarterback?

Even with placing Randall Cobb, Jermichael Finley and Bryan Bulaga on injured reserve, missing James Jones for two games and Eddie Lacy for one game, the Packers still rank second in the NFL in offense, according to Football Outsiders' DVOA statistic. With great performances from Rodgers, Lacy and Jordy Nelson, Green Bay is third in the league in scoring and second in total yards. Mike McCarthy's offense wasn't just good, it was good in the face of a constantly running ticker that spat out nothing but bad news.

But this latest bit of bad news may be more than even McCarthy can overcome.

The Packers defense is ranked 26th in DVOA, their special teams is 25th. Only Denver can boast a better offense, but the Broncos have a better defense, good special teams and their star quarterback is doing just fine.

Only two quarterbacks in the last 21 years have led the Green Bay Packers in passing yards. Rodgers is likely going to make that 22 straight years no matter what happens from this point forward, but it's undoubtedly going to be the least-productive season of his career thus far. Do the Packers backers have enough to keep hope alive until his collarbone isn't collarbroke?

That will be tough.

Here's a look at Green Bay's QB situation, and a few more QB notes around the league.

As a lifelong Seahawks fan, I know about Wallace's career all too well. His selection in the 2003 draft was a bit of an exciting one, as almost any drafting of a quarterback can be, but it was also interesting given his skill set and his refusal to move to wide receiver. Back in 2003, we didn't have a "read-option" offense in the NFL, and the movement toward African-American quarterbacks was still slow to gain traction as we continued to push athletic players like Wallace to please give another position a chance.

What would Wallace's draft stock be today if he was entering the 2014 NFL Draft as a 22-year-old?

Unfortunately, that's not what he is. Wallace is 33, and while it's fun to think about how he's outlasted the careers of draftmates like Byron Leftwich and Kyle Boller, now set to make his 22nd career start, what more can McCarthy do for a player who couldn't make an NFL roster in 2012 and was cut by the Saints and 49ers earlier this season?

An interesting note about Wallace is that despite not ever really being named as a starter, only coming in when the incumbent was injured, he threw at least one touchdown in seven straight seasons between the Seahawks and Browns. Wallace's most extensive work came in 2008, starting eight games in place of an injured Matt Hasselbeck and throwing 11 touchdowns against three interceptions.

Still, the greatest memory I will ever have of Wallace won't be as a passer, but as a pass-catcher, when he hauled in a surprise 28-yard reception against the Carolina Panthers in the 2005 NFC Championship game. It was at that moment that I knew Seattle was going to its first ever Super Bowl.

And that I'd rather see Wallace as a receiver than as a quarterback.

These next few games will either be retribution for a player who has waited a long time for another chance to be a starter, or reinforce that he's not quite up to the level of most NFL starters.

Last season, a rookie quarterback led a surprise team to seven straight wins after a 3-6 start in order to make the playoffs. Can Manuel be that guy this season?

If Manuel can return and start this week, after conceding several games to backups Thad Lewis and Jeff Tuel (and going 1-3 during that stretch), he's got an interesting schedule ahead of him: Steelers, Jets, Falcons, Buccaneers, Jaguars, Dolphins, Patriots. The combined record of the Bills' next six opponents: 13-36.

If they somehow manage to be perfect in those games, the Patriots are likely the only thing standing between Buffalo and its first playoff appearance since 1999.

What could possibly be miserable about being 9-0? Perhaps the same issue that many San Francisco fans had over the previous two seasons: "We have a great defense, but our quarterback isn't doing us any favors. Perhaps not doing anything to make things worse, but not exactly pulling his weight on offense, either."

It's like asking a friend to help you move and he says, "No, I won't help you move. But I also won't slash your tires and break your kneecaps, so in a way I am helping."

Smith is averaging 6.1 yards per attempt, which is 31st in the NFL among qualified passers. His touchdown percentage of 2.9 is tied for 28th in the NFL with rookie Geno Smith.

The Chiefs opted to draft tackle Eric Fisher and trade for Smith, which will officially cost them two second-round draft picks, and it certainly looks like that move is paying off even with the slow development of Fisher. But it also seems more and more likely that Kansas City will draft a quarterback next April to eventually supplant Smith. Much like what the 49ers did with Colin Kaepernick.

And then maybe they can trade him again to retain those picks, even though by now, we are all pretty clear where Smith's limit is as a QB. 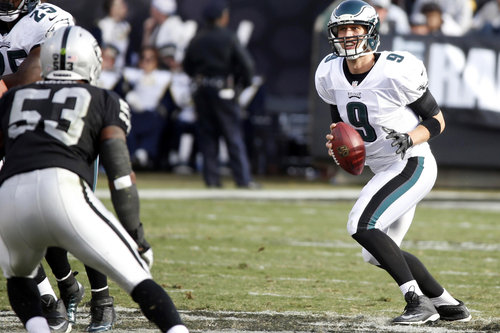 Nick Foles unexpectedly joined rare company this weekend, and now we look at whether it's fair to downplay his achievement in relation to Peyton Manning.

Speaking of the Chiefs, Andy Reid is no stranger to a consistent churn of drafting quarterbacks with high potential even when he appears set at the position. He consistently did that in Philadelphia, and it often paid off in draft-pick rewards or having a solid backup to Donovan McNabb or Michael Vick. Now head coach Chip Kelly can give some thanks to Reid for not leaving the cupboard bare.

Or, it seems even more to the point, leaving the cupboard stocked with a player who presently leads the NFL in some of the most important rate stats.

Foles has 13 touchdowns and no interceptions following his ridiculous seven-touchdown game against the Raiders. His 127.4 passer rating is tops in the NFL, as his 10.9 adjusted yards per attempt. Yes, even better than Peyton Manning, who happens to be having the best season by a QB in NFL history.

Except for Foles, that is!

Of course, there is a big difference between 333 pass attempts and 118 pass attempts. What's going to happen after a few more starts? Likely, his numbers will decrease. Almost certainly. But will Foles actually be able to do enough not just to hold off Michael Vick for the remainder of the season, but keep Kelly from drafting his own QB next April?

Even if it was, say, a kid from Oregon?

It seems like a lot of people are fine with Mike Glennon this season, but how much of that has to do with the fact that he's simply the guy who replaced Josh Freeman? Greg Schiano was pretty vocal it seems against Freeman, benched him after an 0-3 start, said Glennon was the guy and then ... they are 0-5 since.

I think we can all agree that Freeman has been pretty terrible for a while now, but I'm not ready to name Glennon the quarterback of the future just because he's been better than the worst quarterback in the league. I once upgraded from a 10-year-old 1993 Honda Civic to a 10-year-old 1997 Honda Accord.

Glennon is an improvement, and he's improving -- 5 TDs, 0 INT over the last three games -- but not only does he have to keep improving, he has to see whether or not Schiano, his biggest backer, is still around to see it through.

That seems less and less likely.