Is RG3 Trying To Get Hurt? Yes.

Seriously this is a strong take I dont think you can handle it, thats real talk. If you dont want a cutting edge opinion Im sure Spencer Hall wrote 5,000 words on the different types of fried goose flavored bourbon LSU fans will mixing with birdshot and firing into there own legs to get extra hammered this weekend so go read that to distract yourself from my Big Boy opinions. I live in The Real World, not some koom-by-yah meadow picnic where we all hold hands. Sorry, not sorry.

Share All sharing options for: Is RG3 Trying To Get Hurt? Yes.

Last night was a alltime stinker of a performance from a QB who should be spending more time holding his nose then his knees these days folks. After really impressing himself in the first half with big numbers that alltimately didn't mean what I scrape off my shoe when I get home from work, Robert Griffin reverted back to what he knows best- taking big hits while trying to make us think he supports the military. I've got news for you folks- the only Improvisational Explosive Device that Griffins got is his right knee you guys, and as long as Griffins there QB the Redskins will continue to embarrass themselves so much there's NO WAY they should change the name.

But Im done being polite. There was something "Fishy" about Griffins performance last night,, and while you might say it has more to do with his receivers playing "Catch-And-Release" inside the Red Zone Im here to tell you its more about RG3's presence outside the "Tackle Box." More then ever last night it became a parent that Griffin WANTS to get hurt. When Griffin tucks the ball and starts to run, it starts out like your watching a cool jazz sax solo but then by the end of it you realize its just "Crash Into Me" as he takes another killshot from a defenser who's more than eager to help RG-DMB hike up his skirt a little more.

I could even see it in the announcers eyes last night. They knew it. I knew it. You knew it, but Im MAN enough to admit it: Robert Griffin WANTS to get hurt.

In My Opinion, this is a growing trend in the NFL in locker rooms from Miami to Washington- The Superstar QB or Offensive Tackle who are looking for a excuse to quit football and still get paid. Many people much smarter then me have been openly speculating that Jonathan Martin of the Dolphins doesnt have the drive to get bullied or play football anymore- and that this whole manufactured rage at his White teammates calling him the N-Word and threatening to kill him is a way for Martin to make a quck buck in a lawsuit on his way out the door. I wouldnt put it past RG3 to follow this trend, except he's using his knees as a vehicle to cash-in instead of using them as a vehicle to win-out. Hes got his sights set on things besides football whether its endorsements, getting married or whatever, or seeing just how long he can grow his dreadlocks before Mr. Snyder or Mr. Goodell has a anueyrism. Speaking of "mini-strokes" lets talk about Brett Farve- he was the last QB to take punishment like that in Minnesota, and it ended up ending his career prematurely. Maybe that was Griffins plan too.

A quick look at the facts shows us that took more shots in Minnesota last night then Koren Robinson. Many of these came on plays where RG-Me would just try to pump-fake a defenser out of his socks and then take a selfish hit as he was getting rid of the ball or throwing a touchdown. You could almost see him checking off a little box in his mind, smiling that disengenous smile and saying "Ok, good theres another big hit I took on national TV."

There's no possible explanation other than he was just Hot Dogging it out there the way he seems to Relish taking hits, but in reality hes just being a Weiner and the rest of the league has Ketched-up to his style of play, to be Frank. Not to bring up his hair again, but his hair makes it literally impossible to keep his helmet on. Everytime he ran into a sack that helmet would be flying over the field like Kyle Turleys ghost was out there. If your going to have your hairstyle tied up in braids maybe secure one of those suckers to your chinstrap like we learned in Boy Scouts. Be prepared- this is day 1 stuff here Robert.

Im pretty confidant when I say that Griffin doesnt want to be a football player, he just wants the money and lifestyle that goes along with it. And even though you'd think DC might be sick of Hope and Change, most of their residents are waking up "Hoping" for a "Change" at QB.

I'm calling this Washington team "Bone Thugs N RG3" now because after showing some life after the First of The Month, there now at a Crossroads. As our Founding Father Thomas Jefferson said, "Do, or do not. There Is No Try." And hes 100% correct, there was no try last night in Griffins game, only his 'do. 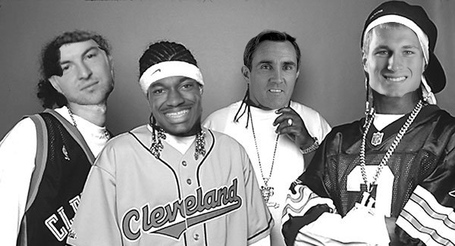