A week ago, thousands of people lined up in the streets of downtown Chicago dressed as Mike Ditka for a 5K run. On Monday, the Bears finally retired Dikta's No. 89, the one he wore as a Hall of Fame tight end for Chicago's 1963 NFL champions, at halftime of a game against the Dallas Cowboys.

Mike Ditka has a message for you, and it's 'GO BEARS'

Iron Mike did his thing at a halftime ceremony retiring his No. 89.

Everywhere you looked, there was Ditka.

Ditka on the highrise buildings, Ditka in the stands, Ditkas smothering your TV. His halftime ceremony was even granted the proper, mythical setting of "BEAR WEATHER," made complete by a wind chill below freezing and snow on the ground. The only real surprise was that the Bears hadn't done this years ago.

In the almost three decades since he led the franchise to its only Super Bowl victory, Ditka has become the franchise's unlicensed mascot. He remains startlingly relevant, maybe even omnipresent during football season. He's more beloved here than Michael Jordan. Say what you will about Chicago being fat, having ultra corrupt politicians and volatile weather, but no one can accuse this city of not appreciating its past.

Because of how popular Ditka remains in Chicago, the game between the Bears and Cowboys almost seemed to take a back seat to the halftime festivities. But as 55,000 people came to worship at the church of Ditka, current Bears coach Marc Trestman showed the congregation how a resurrection really feels.

Monday night's 45-28 win was the perfect link between Chicago's past and its future. Come for Ditka, stay for the first legitimately good Bears offense since Walter Payton's heyday. The bruising, defense-and-running football culture that has always defined this franchise is on the way out. The Bears can throw the ball now, even with backup quarterback Josh McCown. Toughness has been replaced by measured analytical thought. Red-faced screaming has given way to an anti-hazing policy and positive reinforcement.

For the first time in 30 years, Ditka's presence was reduced to a halftime spectacle instead of a guiding ethos on the field. On Monday night, the Bears did not punt. 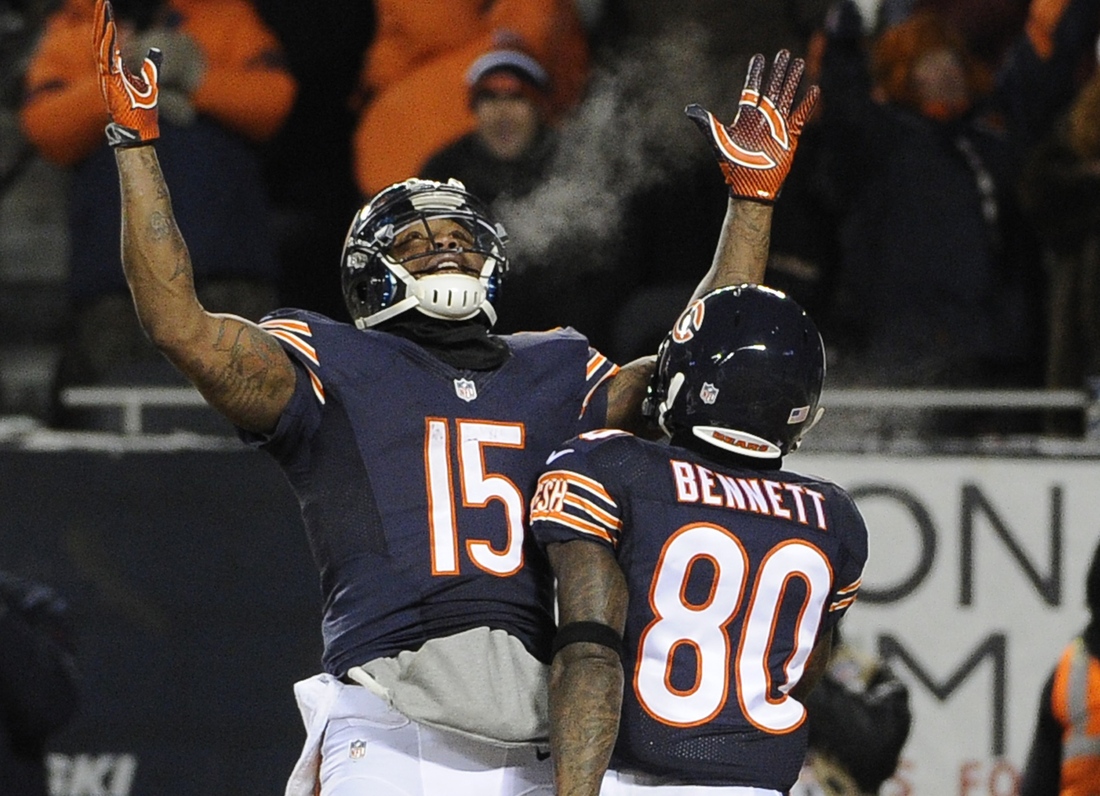 The greatest testament to Ditka's legend is how the Bears remained in his image until his 74th birthday. When former coach Lovie Smith used to say the Bears "get off the bus running," it was supposed to be taken as a badge of honor instead of a sign that the franchise was stuck in the past. The numbers proved it: from the 2009 season when Jay Cutler took over as quarterback through last season, the Bears had an average offensive rank in DVOA of 28 out of 32, according to Football Outsiders. In one season under Trestman, they're already pushing towards the top five of the league.

They're doing it with a backup quarterback. They're doing it reinforced by the worst defense in recent franchise history. Trestman is a magician, a master of the dark arts of basic mathematics. But he doesn't do it alone. The Bears have found offensive competence for the first time in many, many years for three reasons.

Josh McCown is a folk hero

Josh McCown is leading the NFL in QBR. Let that sink in. Say what you will about ESPN's made-for-TV metric as an all-encompassing quarterback stat, but McCown still ranks higher than Peyton Manning and Drew Brees. That has to count for something. He threw for 348 yards, four touchdowns and no interceptions on Monday night against the Cowboys in a performance that's becoming par for the course.

McCown has been incredible since taking over for Cutler in Week 7 against the Redskins. The Bears would probably have another win if McCown was inserted sooner in a Week 10 game against the Lions that Cutler started. While Cutler can't fight off his burning desire to test the tenacity of his own arm strength by winging the ball into coverage downfield, McCown simply takes what the defense gives him. It feels like he's running a pure version of this offense. His play likely says more about Trestman's ability than anything else, but after decades of terrible starting quarterbacks and backups that made you want to give up on the sport forever, McCown has been a certifiable gift.

Simply put, the Bears haven't lost anything with McCown in there instead of Cutler. They're actually playing better with McCown. Cutler's looming free agency is an issue for another day, but seeing as McCown is 34 years old, it would shock me if Cutler isn't back. But whatever. For now, Josh McCown deserves all of the appreciation and admiration usually reserved for Ditka. Give him his own damn 5K race.

Alshon Jeffery is a monster

There are a million great things about Alshon Jeffery, but you really only need to know four of them:

Two weeks ago against the Vikings, Alshon did this on his way to 249 yards receiving:

On Monday against the Cowboys, he did this:

God Bless everyone have a great day

It's the same tweet pretty much every day! Man, he's the greatest.

Before the season started, Brandon Marshall made it clear he needed help. He blamed a hip injury on the fact that he had to carry the offense all by himself last season, and he wasn't wrong. Jeffery's development this season gives the Bears two of the 10 best wide receivers in the league. The Bears! It is not hyperbole when I say they are already the two best receivers in the Bears' 90+ years of existence, and please, save me the email about Harlon Hill.

Trestman is a sorcerer

A week ago, when the Bears lost to the Vikings, everyone rushed to pin the blame on Trestman. It's because he asked Robbie Gould, the second most accurate kicker in NFL history, to attempt a game-winning 47-yard field in overtime on second down. Trestman gave a quality explanation, but no one cared. Every radio host and and newspaper columnist in the city was blasting him. It was incredible how people could fail to realize Trestman is reason they were even in that game.

Trestman was a bold hire for Phil Emery. He brought a quality offense to a city that has never had one with a quarterback who was coaching high school football two years ago, and the entire city is blaming him for trusting Gould on an indoors kick it seems like he would make 97 times out of 100. It's hard to blame Trestman for not wanting to risk a dumb penalty or turnover. Gould inside of 50-yards is the surest bet in football. It just didn't work out.

Trestman's magic was on display in all its glory Monday night. The Bears scored on literally every possession. In minus-5 degree weather ... with a backup quarterback. This is the team that boasted the No. 30 offense in the league two years ago according to Football Outsiders.

It's amazing what a revamped offensive line, two monster receivers and some intelligent play-calling can do for a football team. Ditka's number is retired in the stadium, and his legend will be cemented in this city until the end of days. But it's time to let go of the past's stranglehold on the present and appreciate what's happening now.

The Bears have an explosive offense, and that's really what deserves to be honored.

• Tony Romo is not the Cowboys' problem'