New England would need another incredible comeback if it wanted to win this game, but it came up just short. That also leaves the Patriots short of homefield advantage throughout the AFC playoffs, for now.

The New England Patriots have pulled off some incredible comebacks lately with Rob Gronkowski, but they had neither this Sunday against the Miami Dolphins. In their first game since hearing the news that Gronkowski would miss the rest of the year with a torn ACL, the Patriots went down to Miami and lost, 24-20. 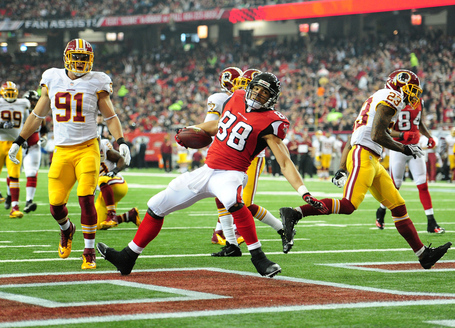 It nearly happened again for the Pats -- Tom Brady led New England to a 20-17 lead with just over four minutes left in the game, but this time it was Ryan Tannehill who had the big comeback in him. Tannehill drove Miami down the field on the ensuing drive, hitting Marcus Thigpen for the go-ahead score with 1:15 to go. There would be no miracle this time for the Patriots.

The loss drops New England to 10-4 and keeps the Patriots behind the Denver Broncos for the top seed in the AFC. Had they won, following Denver's loss on Thursday to the San Diego Chargers, then Brady and company would have taken over the No. 1 seed. Instead, they'll remain the two seed for the moment, but the 9-4 Cincinnati Bengals take on the Pittsburgh Steelers on Sunday night.

For the Dolphins, they get to remain alive in the AFC Wild Card hunt for another week. The win puts Miami at 8-6 with two games to go. If the Baltimore Ravens lose on Monday night to the Detroit Lions, then Tannehill's Dolphins will move up into the six seed for the playoffs. If Baltimore wins, then it's just back to fight again next week for Miami, as it tries to make the playoffs for the first time since 2008, and only the second time since 2001.

What sort of Pro Bowl considerations should Tannehill be getting? He threw for 312 yards and three touchdowns against New England. He found Mike Wallace six times for 105 yards and a touchdown.

Brady was great, even without Gronkowski, throwing for 364 yards, two touchdowns and one interception.

Neither team had much of a running attack, though. LeGarrette Blount had 47 yards for the Pats and Lamar Miller had 61 yards for the Dolphins.

Patriots tackle Nate Solder left the game with a concussion and did not return.

The Dolphins were 2.5-point favorites, according to OddsShark.com, so they did manage to cover the spread.

The Patriots play the Ravens in Baltimore at 4:25 p.m. ET next Sunday.

The Dolphins head to Buffalo to take on the Bills at 1 p.m. ET next Sunday.