Peyton Manning managed to impress us every way possible this season. After breaking the NFL's single season passing touchdown record on Sunday, it's time to pay our respects.

No one had any sense a year and a half ago that Manning would be resetting records. He was coming into the 2012 season off four neck operations. A year prior he couldn't lift a three-pound dumbbell. His body was ravaged, he had just been released by the Indianapolis Colts, and at 35 years old he was well within his rights to retire.

Instead Manning rehabbed and struck a $96 million deal with the Denver Broncos. He proved his worth his first year in Denver, earning NFL Comeback Player of the Year behind 37 touchdown passes to 11 interceptions. Many proclaimed Manning "back," though those who did were premature. The Broncos hosted the Baltimore Ravens in Week 1 of the 2013 season, and Manning proceeded to show off the player he really is and set off on a campaign for the ages.

Here are the highlights from the Year in Peyton:

Wander into a bar and mutter something about the NFL being a "passer's league" these days and you'll be met with rumbles of agreement. Then everybody will turn back to their drinks because you just said an obvious thing.

Why bat an eyelash at aerial records any more? Huge passing performances by today's super-quarterbacks (your Mannings, Tom Bradys, Drew Breeses, etc.) are dull footnotes to your weekly viewing. Four hundred yards passing? Five hundred? It's been done before, and it'll be done again.

But seven touchdown passes? That will grab attention. Manning torched the Ravens to kick off the 2013 season, and did something that somehow no one else in today's age of escalating pass-happiness could do. No NFL quarterback had thrown seven touchdown passes in a game since Joe Kapp did it for the Minnesota Vikings in 1969.

Then Nick Foles did it eight weeks later and we went back to being our usual bored and jaded selves. But, for a brief moment, Manning made us all a bit delirious, and opened our eyes wide to his potential at the helm of an absurdly talented Broncos offense.

Peyton Manning on pace for 112 touchdowns this season.

It took Manning until Week 5 to finally throw an interception. It came in the first truly absurd game of the NFL season, and it, of course, involved the Dallas Cowboys.

Manning was nonetheless brilliant. He threw his 17th, 18th, 19th and 20th touchdown passes of the season, and led the Broncos to 10 straight points in the final 2:39 to pull off a 51-48 win. The game-winning drive to set up a Matt Prater field goal was, of course, set up by a Tony Romo interception in the final two minutes (he had been brilliant, too, up to that point), and the last offensive play of the game was quintessential Manning perfectionism.

With the game tied, the Broncos had 3rd-and-1 at the Broncos' 2-yard line with 1:35 to play. A first down would allow the Broncos to let the clock run for a game-winning kick as time expired. A touchdown would give the ball back to the Cowboys with time to score. Manning had a small request for running back Knowshon Moreno: stop short of the goal-line.

"He basically was asking me, 'How am I supposed to do that? How can I get a half a yard but not get a yard and a half?' " said Manning, who threw for 414 yards and four touchdowns to give him a record-setting 20 in the first five games.

Moreno managed to pull off the first down without scoring, and Manning took three snaps to drain the clock to 2 seconds for Prater, who also had a 50-yarder among his three field goals.

The return to Indianapolis

Manning's return to Indianapolis was hardly triumphant. In one of his more mortal performance this season, he lost a fumble, an interception and was sacked four times. Andrew Luck, the man the Colts released Manning for, outdueled the veteran, matching his three touchdown passes and adding another score on the ground. The Broncos went on to lose their first game of the season, 39-33.

Manning still had a few moments of brilliance ...

... but the loss overshadowed him somewhat.

But despite the result, a few potentially (not really) discouraging remarks made by Jim Irsay the week prior and a conspicuously open Lucas Oil Stadium roof on a chilly night to invoke Manning's cold weather bugaboos, there was clearly no love lost between Manning and the town he once claimed as his own.

Prior to kickoff, Manning paused his pre-game throwing routine to acknowledge crowd that was giving him a standing ovation while a tribute to some of his best moments in Indianapolis rolled on the video boards.

Mannings admitted after the game that he had been emotional. There may not be a more well-prepared athlete in the NFL, but well-prepared does not have to equate to robotic.

And about the cold weather: 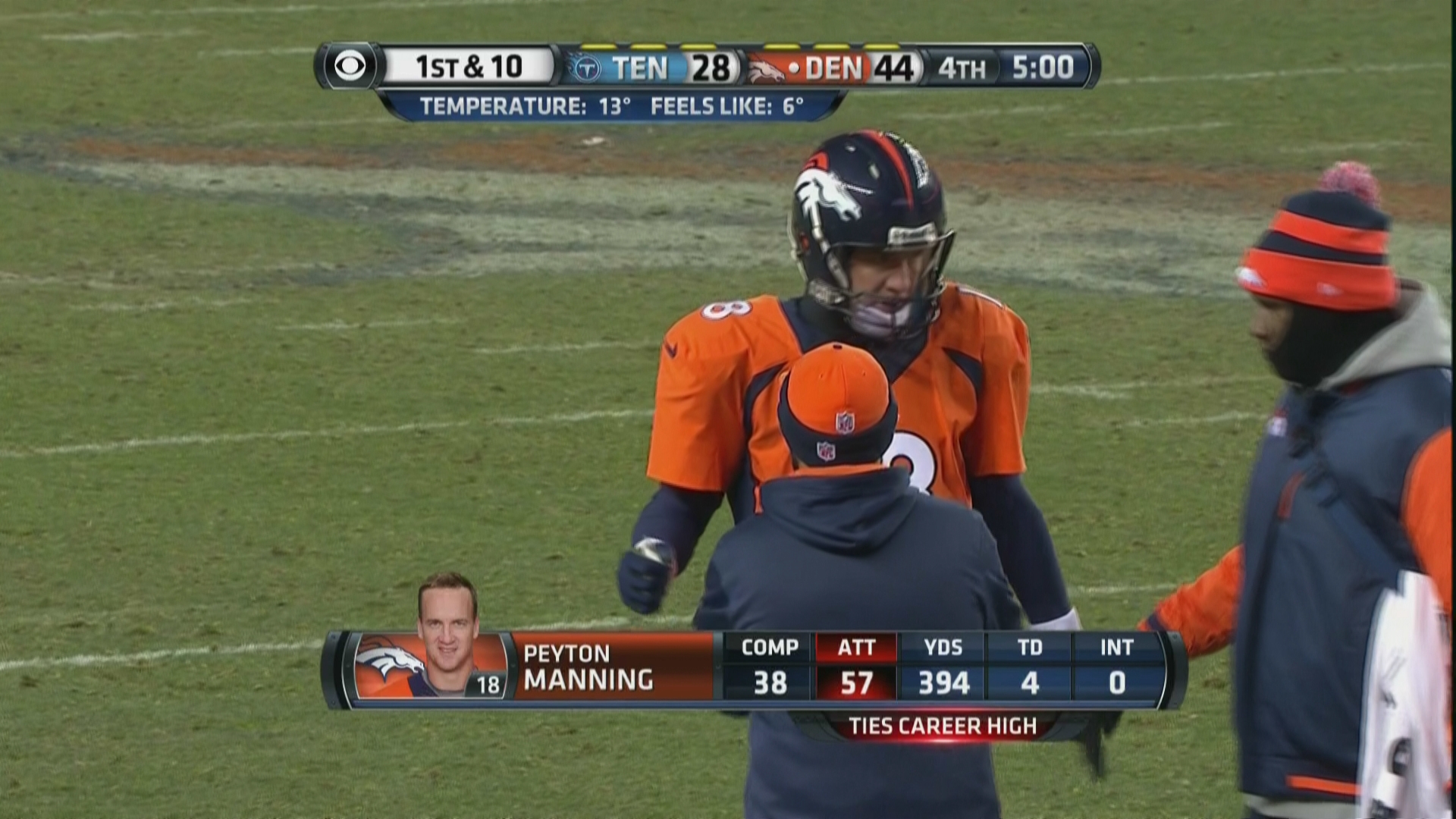 (Yes, the Patriots game happened. Manning had inarguably his worst game of the season in freezing temperature and the cold weather meme reached new heights. He bounced back nicely two weeks later.)

And now we're approximately back to where we are. The fact that Manning won an award or was recognized for his efforts isn't really all that noteworthy. He'll be winning plenty more awards in due time, none bigger than a potential second Super Bowl ring. Manning's Sportsman of the Year award did come with a very nice article penned by Sports Illustrated senior writer Lee Jenkins, however.

There were a lot of great anecdotes embedded in the piece. This one resonated:

At the combine in Indianapolis leading up to the 1998 draft, strength coaches from the 49ers, Raiders and Bills took Manning's measurements. When they finished, he asked how his body fat compared with other players', and reminded them to note that one of his knees was swollen. The trainers stifled laughs. "He's the first pick in the draft," one muttered under his breath. "Why does he give a s---?" Then Washington State quarterback Ryan Leaf, Manning's competition for the top spot, stepped on the scale. He triumphantly flexed both biceps even though he was 30 pounds overweight. "That was the difference," says Jon Torine, who was then a Buffalo strength coach before joining the Colts. "When Peyton Manning dies, this is what they ought to write on his gravestone: it all mattered to me."

The unintended benefit of living in an era where gaudy statistics can be dismissed as a sign of times is that we can focus harder and appreciate better the personalities behind the numbers. We're amazed by character as much as anything, and few, if any, players have ever been as endearingly geeky about the sport of football. I mean, for god's sake:

Why is Peyton Manning wading into a pool holding a tablet while wearing a helmet and one shoe pic.twitter.com/4NXnrwqXhV

To answer the question posed by the mothership, it's because he's Peyton Manning, and there has never been anyone quite like him.

• Pride of Detroit: Fire Jim Schwartz | Schwartz isn't a fan of his fans