Redskins vs. Giants 2013: The saddest game ever

It was raining. There were a ton of injuries. Eli Manning threw a pick on his last pass of the season. Curtis Painter vs. Kirk Cousins. The stadium was empty. Man, this game was bad.

Share All sharing options for: Redskins vs. Giants 2013: The saddest game ever

Two of the league's worst teams saved their worst performance for the final game of the season. The New York Giants beat the Washington Redskins, 20-6, in a rainy, injury-riddled, turnover-marred embarrassment of a football game that mercifully brings a close to both teams' seasons.

For starters, there were the injuries for the Giants, who apparently couldn't wait for the season to end and instead starting dropping like flies. With Victor Cruz having already been placed on the injured reserve earlier this week, the Giants promptly lost their other two top receivers in Rueben Randle and Hakeem Nicks. Nicks' season ended on an offensive pass interference in the end zone, the ultimate irony in a year he failed to score a single touchdown. Offensive lineman Will Beatty was knocked out of the game with an ugly injury when his knee bent the wrong way.

Then there was Eli Manning leaving the field for a final time. He sprained his ankle late in the second quarter, then had his pass tipped and intercepted on the very next play. He limped into the locker room and did not return.

In a year in which he threw a career-high 27 picks, Eli's first and last passes of the season were interceptions.

Here's the saddest thing you'll see all week: a soggy Eli being helped off the field with the burning wreckage of his 2013 season finally behind him.

Left with the option of watching Curtis Painter and Kirk Cousins in the rain or heading to some less miserable place, most fans chose the latter. 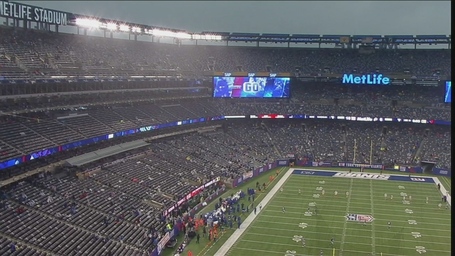 Painter, for his part, kept up the Giants' proud interception tradition by tossing a pick in the endzone on his second drive. The game ended with a total of seven turnovers.

Cousins came in hoping to prove his worth to potential suitors and increase his stock in a possible trade this offseason. Instead, he went 19-of-49 for only 169 yards and two picks. The Redskins probably couldn't trade him for a ham sandwich now.

The game ended with Cousins throwing a pick, because of course.

Veteran Redskins linebacker London Fletcher, who announced that he will be retiring after this season, was playing the final game of his 16-year career. This might be the most depressing last game of a career anyone's ever played. His reaction to a third-quarter Giants touchdown adequately sums up the saddest game ever.

The Giants opened as 3.5-point favorites, according to Oddsshark.com.