Join retired NFL defensive end Stephen White and the rest of SB Nation's NFL crew for live coverage, analysis, jokes and more during tonight's winner-take-all game between the Eagles and the Cowboys. 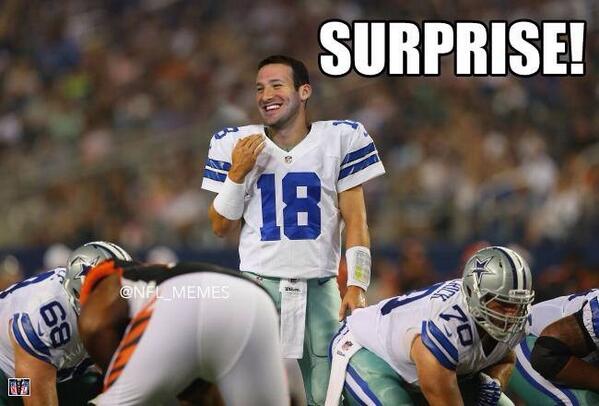 Thanks for coming out, good night!

Tell you what, this one aint on the Cowboys’ defense thats for sure

Every time I want to feel good for the Eagles, Collinsworth brings up Riley Cooper again. Yeesh

man, PFTCommenter is gonna have a FIELD day.

The Ghost of Romo…

Quit crying and do some push ups or something Foles

Looks like that was Hollomon’s second sack of the game

Lions coach Jim Schwartz still waiting to hear his fate, will meet with management in the morning. Team meeting slated for noon. 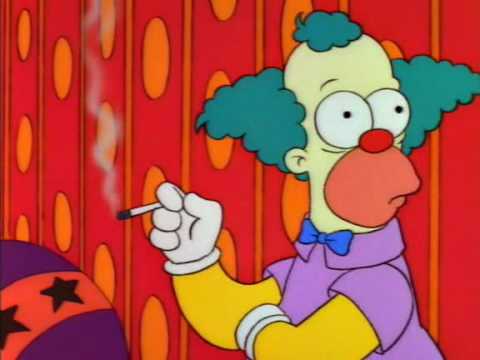 “NOT IN THE FACE” – Nick Foles

Kyle Orton has 358 passing yards. Only time Tony Romo had more this season was 506-yard game vs. Broncos.

Ugh THROW IT UP TO HIM

TOO BIG, TOO STRONG DEZ BRYANT!!!! 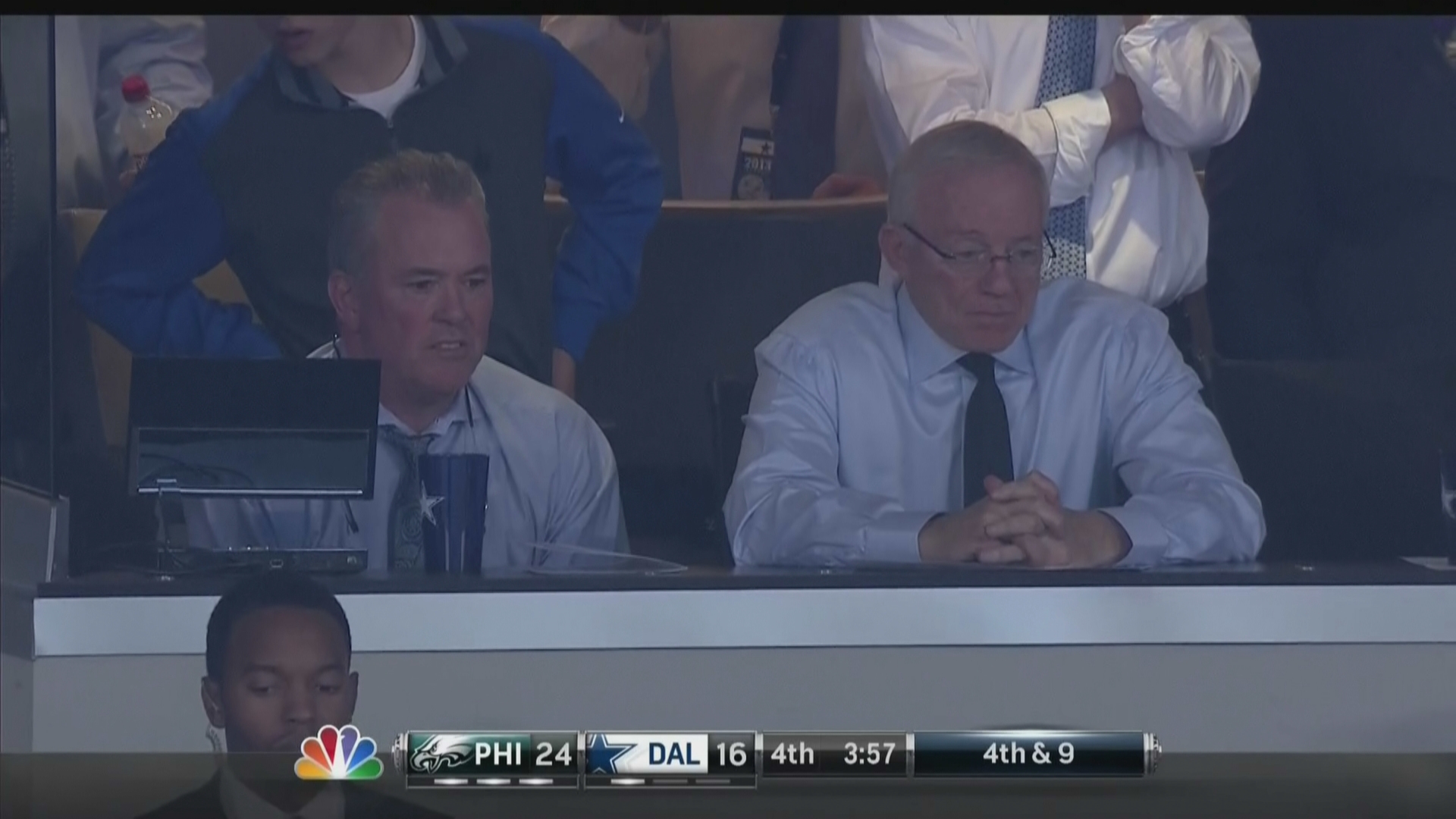 Its 4th and 9 with the game on the line, Id think you would rather take a time out than screw this up.

Chew those old-ass nails, Jerry. Despite them being made of emeralds.

@Oh No Romo yeah, to fire him. I saw him report it on Fox so he may not have tweeted it out, Im not sure

I hate Dallas. And the Eagles. And snow. And outdoor stadiums.

@sgw94 I thought Glazer said they were meeting tomorrow

As a Saints fan I’m disgusted. Cant we catch a break for once and play Dallas in the post season? I mean, really?!

@Oh No Romo Glazer reported that hours ago I think

Eagles score. Carter is putting on a truly disgusting display of loafing

GO FOR TWO STICK IT RIGHT IN THEIR EYE

That Bryce Brown rush was the first time non-McCoy rush for an Eagles RB tonight.

This is an old fashioned ass kicking drive.

Seriously Carter is sleep walking. This is embarrassing to watch.

Bruce Carter is out there looking like he is ready to go home. Terrible effort last two plays

I anticipate Jason Garrett giving Bill Callahan full credit for that playcall on 4th down.

Yes crap on Dez, love on Cooper. Of course

Holloman is making some plays

Wish they had run it again on 4th and one. Instead Barwin knocks down the pass to force a turnover on downs

Well, there goes that flip of field position.

Sit down and shut up dumb Cowboys fans

Like the run call but Murray is stopped short

@sgw94 Kiko earned every one of his 473 solo tackles this year, sir.

I got 99 yards and Witten is every one of them

Witten having a great day. Another catch for a first down

So far Kendricks has been credited with 11 total tackles, an int and a forced fumble. Imagine if the Cowboys had Kiko Alonso’s scorekeeper lol

Another nice play call, quick slant to Dez to get them out of the hole

He didnt get it on the sneak. Again Dallas D makes a big stop

Feel like there could have been a better playcall there

Yeah, no way he scored.

Or not. Timeout by Dallas

Eagles blew that 4th down try

So who is surprised that despite Orton starting, the Cowboys have still thrown the ball twice as much as they have run it.

Why was he lined up so far off him?

Great for the Cowboys D to drop in for a few plays….but they have to go now

And here comes the defensive collapse from the Cowboys

Wynn comes inside and gives up contain

Jon Kitna’s asking everyone who he needs to talk to to get his parking validated.

His sitting down between the corner and safety, dummy

@sgw94 Its a conspiracy by NFLuminati

Another shot throw where Orton doesnt give the WR a shot

@sgw94 Its a conspiracy by NFLuminati

Hey guys, maybe somebody can try to block Kendricks some time today?

@NBSP the unconferenced voting screwed him I think

Jackson cant get past Carr on a deep ball. Now 3rd down

How is Foles not in the Pro Bowl?

@Oh No Romo I see no way this ends badly

I understand not making risky throws in this situation but i get the feeling Orton was gun shy just then settling for the swing pass. Had time to let stuff develop

The #Browns are retaining their assistants for now, I'm told. They will search for a head coach with them in place. Makes it interesting.

Defense was supposed to be the goat tonight

Like, have some assistant making balloon animals with a SUPER serious face.

I hope some of the signals Chip Kelly uses on the sideline are just pure bullshit.

TAFOYA: Eagles PR tells me Avant, who was questionable with a shoulder contusion, has been cleared to return

I like that throw even if Dez couldnt haul it in that time. Keep throwing it where he can make a play and sooner or later he will

@sgw94 Getting nearly half the targets, already has 8 catches for 84 yards.

Dont get away from the running game after my compliment!

Witten up the seam. His stat sheet has to be looking nice right about now

Nice play call. Whomever is calling this offensive game plan for the Cowboys is doing the Lawds work

Gonna be so great when Tressel coaches the Browns.

Really? The first stop on the second half might decide the game?!?! SHUT UP COLLINGSWORTH

@Run Home Jack Not a good weekend for Miami teams.

Then they give up the guts, metaphorically, to McCoy

Nice delayed blitz to get Foles

So are we ready to talk about how Miami had a playoff spot in its grasp and scored SEVEN total points in the last two weeks against the Bills and Jets?

Halftime, smoke em if you got em

Bailey hits the FG to make it 17-10. Closer than I would have thought at this point in the game. Dallas still very much in this

Why didn’t Dallas let the clock run down before calling the time out? With Desean Jackson returning that could come back to haunt them…

What in hell was that? Either give Dez a chance or throw it elsewhere!

All Jason Witten Everything

Witten has become Ortons favorite target of late. Another first down on a corner route

Orton picks up the first down with a scramble up the middle. Time out

Good evening, gentlemen. Apologies for tardiness. I am no Schiano man, clearly.

Browns cite a “a concerning step backward in the second half of the year” in announcement of Chud’s firing.

Good night that throw back to Celek

And then that happened…

And the Browns make it official…

Arizona Cardinals probably wondering what they have to do to get a spot in the NFC East.

Orton doing a really good job with the audibles

Murray is a battering ram tonight

Claiborn with a nice stick. Thought he might get flagged for a second. Foles hung Avant out to dry

McCoy shakes 57 all the way out of the hole. Crazy

Man Foles had forever and still couldnt find anybody. Good by Dalla DLine continuing to work though

@Oh No Romo Josh McDaniels is the hot rumor, but they can do so much worse! Lane Kiffin! Huston Nutt!

Nice night for Avant, the best WR who I constantly confuse for an R&B singer.

No idea why 27 tried to jump that route

The #Browns have fired coach Rob Chudzinski, per team source.

Smart blitz by Cowboys to get Shady in the backfield

Am I the only one who wants to see Orton start tanking so they have to bring in Kitna? Dammit, Kyle, stop interfering with my fantasy! 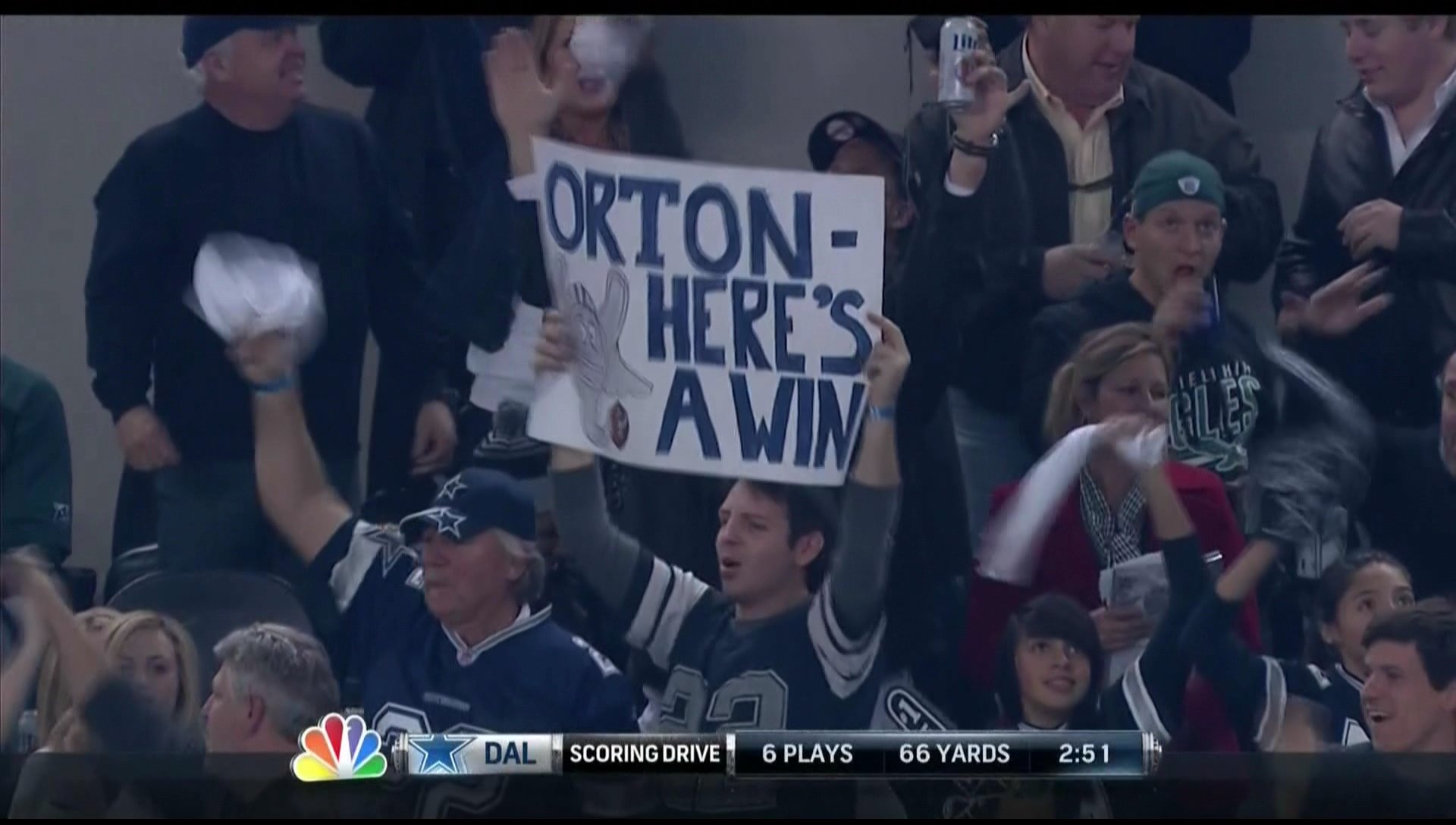 Murray is starting to get rolling

Now thats a shot! Orton to Terrance Williams up the seam from the slot

@Ryan Van Bibber Look, if you can’t win with a Depressing Hydra of QBs in THE NATIONAL FOOTBALL LEAGUE then you don’t belong

Orton throws the pass behind Witten. Starting to look out of rhythm and off target

@Run Home Jack To be fair, Chud is to coaching what vegemite is to food.

Jimmy Haslam has his best accountants on it

No no, Cleveland, the problem’s definitely the coach. Zero chance it’s you.

@sgw94 Because even Atlas would need support if he were forced to bear the weight of the Cowboy’s ineptitude on his shoulders.

Why is Rod Marinelli, the Cowboys D Line coach, on a crutch

Nice play by Wynn on 2nd down

@sgw94 So THAT’S the one team Matt Flynn didn’t play for this year.

Aw the other day that the Eagles havent had to replace anybody on their 53 man roster since the season started. That is incredible

Witten cant make the catch on third and 2. Pass too low

Orton will have to take some shots eventually. These dump offs are cool but hard to keep going methodically down the field. Need some chunk plays

You didn’t want to make the playoffs anyways, Dallas. They play the games in cold weather and shit.

Somewhere in Dallas, Tony Romo is sitting in the corner turning a lamp off, then on. Then off. Then on.

Heath has a big bullseye on his back. Im betting we see the Eagles attack him all game

You gotta be kidding me with that throw and catch

That pass from the Joe Flacco school of blind dumbass luck

Foles shows off his functional mobility by rolling left away from pressure then hitting Jackson on a crossing route for a first down on 3rd and 20. Wow

You deserve that grounding penalty for looking goofy as shit, Foles.

That play was on Hatcher. He has to stay in his gap for the cutback!

Shady getting loose up the middle

@Clay Wendler Only illegal if he hits the QB. Which would be weird. (Unless he plays for Chicago.)

Rhetorical question, of course it was. But they never call it on offensive guys

Hey isnt that the kind of play where refs are supposed to throw a flag per the offseason rule change?

Was Murray ever down? Looked like he was laying on an Eagles player

Like that they went right back to Murray, this time with a dump off pass which he got a lot of yac on

Jerry jones have to find some defenders

Odds Jerry Jones ends up on the sideline by the start of the second half?

Eagles up 3-0 early. At least the defense got a stop, aided by that holding call. Offense has to shake off that turnover and go right back to that same gameplan

@sgw94 Selvie is what convinced me that Marty Hurney was Neville Chamberlain. Gave up on way too many Poland’s way too early.

3rd and 19 and Foles just about splits the defense for the yardage needed. Instead Eagles have to try a 47 yard field goal.

LeSean McCoy is using butter in literally anything. It isn’t fair to the diabetics on the Dallas defense.

Buuuut its coming back with a holding call

Shady doing Shady things. That dude is unreal in the open field

I dont recognize half of these names for the Cowboys defense

Good job by the Cowboys playing the screen

Everyone’s booing Romo out of habit.

Of course Murray fumbles, of course

Looked like Orton audibled to that swing pass to Murray. Nice call

Eagles give up a first down by jumping offsides on defense

That didnt make any sense Collingsworth

A SAVIOR EMERGES (AND DRINKS JACK STRAIGHT FROM THE BOTTLE)

Good start to the game for the Cowboys running the ball with Murray for about 6 yards. Need a big game from him

Will Jon Kitna be added to the prestigious list of “People Kyle Orton has been benched in favor of”?