Don't blame us for going blue, blame the NFL.

Things went a little nutty in Week 13, and no that's not a premature pun. Teams around the league were trying to assert their dominance entering the playoffs -- but things didn't get a lot simpler.

We're all adults here, so let's get the mechanics of this out of the way. San Francisco 49ers tight end Vernon Davis was tackled by his penis. More aptly, he was dragged down by it.

This isn't one of our top plays because T.J. McDonald had the wherewithal to treat the male anatomy like a free dreadlock to grab; we're acknowledging it because of Davis.

I've never had the specific pain of having someone lean their entire body weight on my genitals, but I sure wouldn't run five yards after the defender was attached. Kudos to the tight end for showing that neither rain, nor sleet, nor penis abuse would stop him. 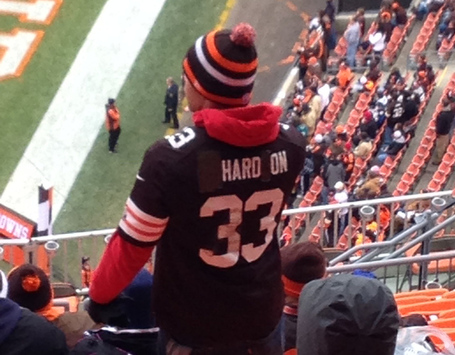 There are precious few resources on this earth, and we applaud this forward-thinking Browns fan for life giving him lemons and him making lemonade.

Trent Richardson will eventually be replaced with a new running back, and Cleveland got a first-round pick to boot. All that was left was finding something to do with all those leftover jerseys. This Browns fan gets our applause for finding a brown roll of duct tape and repurposing his once-cherished item.

I suppose we need to put a caption with this, don't we? At this point, astounding Adrian Peterson plays are par for the course. It's bad enough that he was allowed to hit the second level with ease, but two spins later, the Chicago Bears look like they're playing a lesser brand of football ... CFL maybe? (Don't hate me, Canadian friends.)

Essentially everything you could apply to Adrian Peterson's run applies here too. This is how a wide receiver makes three defenders look like fools.

More importantly, this catch by Alshon Jeffery is a reminder why pre-draft knee-jerk reactions as so hilarious in the post mortem. Remember when he was too slow and fat to play wide receiver in the NFL? What about rookie Keenan Allen, who was also hit with the "too slow" label and now leads all rookies in yards?

Keep on keeping on, Alshon. You are a treasure.

NOT THE PLAY OF THE WEEK: Brandon Weeden is bad at all sports

There are reasons not to pile on Brandon Weeden. I'm sure there are.

Against the Jacksonville Jaguars, Weeden took his season totals to 1,731 yards, nine touchdowns, nine interceptions and one ugly soccer kick. Weeden doesn't need us to give him lessons on playing quarterback -- after all, he did stop using his Twitter account so "5-year-old kids" wouldn't tell him how to play.

That said, I might find a 5-year-old to teach him how to kick a ball.

• Takeaways from every game: Panthers make it 8 straight