Houston turned to a familiar face, and it was almost enough on Thursday Night Football.

Matt Schaub is largely blamed for the Houston Texans' struggles in 2013, but on Thursday, he almost cost his team a chance at the No. 1 overall pick in 2014. A switch at quarterback in the second half against the Jaguars almost resulted in a comeback win, but Jacksonville had other ideas, holding on to a 27-20 victory to sweep Houston for the first time since 2009.

Chad Henne asserted himself from the first drive of Thursday Night Football. The Jaguars quarterback found four different receivers in a 75-yard drive that resulted in a touchdown pass to tight end Marcedes Lewis. The offense caught some breaks, but it was the play of a confident team believing in its ability -- something that was sorely lacking early in the season.

Life was good in Jacksonville, and head coach Gus Bradley was happy.

Then the second quarter happened. Everything dried up for Jacksonville, while Houston slowly started to establish its passing game. The Jaguars gained a total of 30 yards, while Case Keenum led several long drives, culminating in a late touchdown. A one-score game positioned the Texans to make a second-half push following the kickoff, but a series of defensive penalties allowed the Jaguars a chance to kick a field goal to close the half.

Undisciplined play mired the Texans in the first half, finishing with over 100 yards in total penalties. 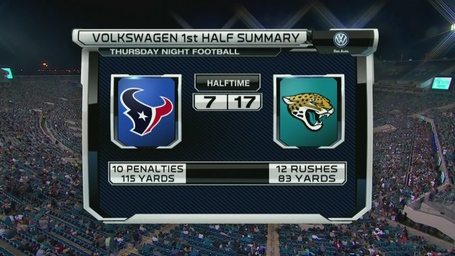 Houston desperately needed a touchdown out of the break, but its long drive sputtered and resulted in a field goal. The Jaguars leaped on the opportunity to extend their lead, driving 88 yards on the back of a long Maurice Jones-Drew run and capped off by a trick play that saw wide receiver Ace Sanders throw a 21-yard touchdown pass.

The Texans' coaching staff had seen enough of Keenum. With a little more than three minutes remaining in the third quarter, they turned to Matt Schaub -- making latest his appearance away from Reliant Stadium, where he was heavily booed. Away from the home field pressure he was near-perfect, completing six of his first seven passes and throwing a touchdown to cut the lead to seven points.

Schaub played well, but it wasn't enough. The switch came too late, and a 14-point deficit was too much to overcome. A late interception was enough to shut the door, an appropriately disappointing footnote to an excellent game. Schaub finished with 198 yards passing, and posted a passer rating of 76.5. The loss keeps Houston firmly in possession of last place, poised to select first overall in the 2014 draft.

Jacksonville continued its winning ways. The Jaguars have now won three games in a row and swept the Texans for the third time in franchise history. Gus Bradley might not have won his team the top pick in the draft, but he's made waves in installing a winning culture in the organization -- which is far more important.

Andre Johnson had a huge game for Houston, finishing with 154 yards on 13 receptions.

Jones-Drew had his best game of the season, totaling 103 rushing yards.

Jones-Drew left in the fourth quarter due to a hamstring injury. He was unable to return.

The Jaguars were 2.5-point favorites, according to OddsShark. Their seven-point win means they covered the spread.