With a 27-20 loss to the Jaguars, the Texans are on their way to securing the No. 1 pick in the 2014 NFL Draft. The struggles of Matt Schaub and Case Keenum may have solidified their decision on whom to take with the first overall pick.

Share All sharing options for: 2014 NFL Draft order: Texans solidify grasp on No. 1 overall pick with loss to Jaguars

Matt Schaub had a shot at redemption Thursday night. He took over for a struggling Case Keenum in the third quarter and led the Houston Texans to 10 straight points to pull within a touchdown of beating the Jacksonville Jaguars. The Texans regained possession of the ball down four points, at their own 22-yard line with 2:21 left in the game. After arguably the worst season of his career (and certainly the most disappointing) Schaub had a chance to save face. 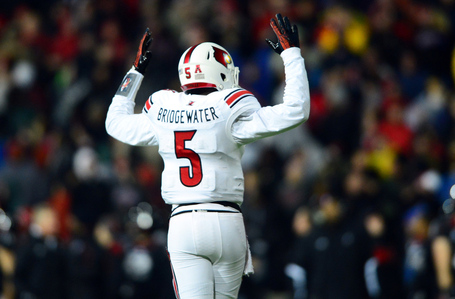 On second-and-10, he threw the ball into the waiting arms of the Jags' Geno Hayes. The interception was Schaub's 10th of the season.

With the 27-20 loss, the Texans put themselves firmly in the driver's seat for the No. 1 overall pick in the 2014 NFL Draft. The struggles of Schaub and Keenum may have solidified the Texans' choice if they they hold on to the first pick. In a stacked class of quarterbacks, Louisville's Teddy Bridgewater stands out in the minds of scouts. Dan Kadar projected Bridgewater to go the Texans in SB Nation's latest mock draft:

1. Houston Texans: Teddy Bridgewater, QB, Louisville: As they flip between Case Keenum and Matt Schaub this season, it should be apparent that the Texans don't have a franchise quarterback. As long as you don't judge him against players like Andrew Luck or Russell Wilson, Bridgewater has the classic traits of being a franchise quarterback. His on-field intelligence is advanced, and he has plenty of physical talent.

The same night that Keenum and Schaub struggled, Bridgewater did this against Cincinnati:

Bridgewater has superior athleticism, superior intelligence and a powerful arm. He passed for 3,523 yards with a 70 percent completion rate at 9.2 yards per attempt, and had 28 touchdown passes to four interceptions with a bowl game left to play. In sum, Bridgewater is pretty darn good. 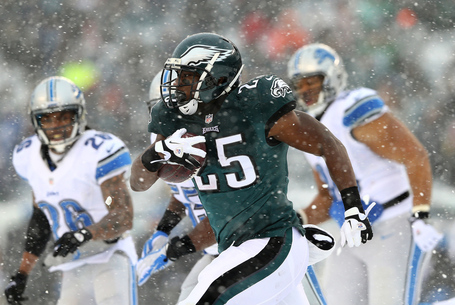 If Bridgewater doesn't strike the Texans' fancy, the likes of Fresno State's Derek Carr (Kadar's projected No. 2 overall pick to the Jaguars) and LSU's Zach Mettenberger (No. 7 overall to the Cleveland Browns, before his ACL injury became known) could. The need is clear. And if the Texans do opt for a signal-caller, expect Matt Schaub to be out of a job.

NFL franchises haven't traditionally been afraid to eat a big cap hit to shed an incumbent quarterback if they feel there is a quarterback on the board worth drafting No. 1 overall. Peyton Manning was released before the Indianapolis Colts drafted Andrew Luck and one year after Manning signed a five-year, $90 million contract. Marc Bulger had three years left on his six-year, $62.5 million contract when he was released just before the St. Louis Rams drafted Sam Bradford.

It's unfair to say that the investment didn't pay off for the Colts. Andrew Luck has lived up to his billing through two seasons, but he hasn't played up to the all-time great standard Manning has set this season in Denver. In St. Louis, meanwhile, Bradford has been somewhat of a disappointment. The team has yet to win more than seven games under his direction. A resurgent 2013 season was unfortunately cut short after six games due to injury.

The Colts and Rams were desperate, however, coming off two-win and one-win seasons, respectively, to earn No. 1 overall picks. The Texans could finish with just two wins this season after entering 2013 with Super Bowl aspirations. If the Texans ultimately "earn" the No. 1 overall pick, the promise of a rookie quarterback may well be worth the risk.