Anyone whose read my takes knows that I've been very supportive of RG3 from the start, but my patients is wearing as thin as his act. The breaking news that everyones talking about is that backup signal caller and first-string gentleman Kirk Cousins proposed to his long-term (probly not live-in) girlfriend last weekend.

The story of the proposal is a great alegory of whats happening in DC. Ol Captain Kirks good buddies with Congressman Bill Huizenga (R-MI) and helped Cousins break in to Speaker Pelosis fancy office to let the once and future Redskins starter propose to his beautiful girlfriend. Much like RG3, Nancy Pelosis office comes with all the flashy bells and whistles like a balcony with a view, but nothing ever gets acomplished in it besides talking about healthcare. But thanks to Representative Huizenga, Ol' KC Masterpiece popped the question with George Washingtons giant tomb in the background almost flashing a smile, and she said yes folks.

Whether its for my firearms that I hope to buy one day, or for weddings, Im usually not a big fan of registrys,, but if there was anything that could ever tell you what kind of a man or leader someone was, its in the gifts that they ask there friends and family to buy them.

The happy couple is registered at Bed Bath and Beyond just like another Washington QB who allegedly got married this year, and the difference between Captain Kirks registr-WE and RG3's Regitstr-ME is Bed Bath and Beyond beflief folks. Lets take a look shall we? 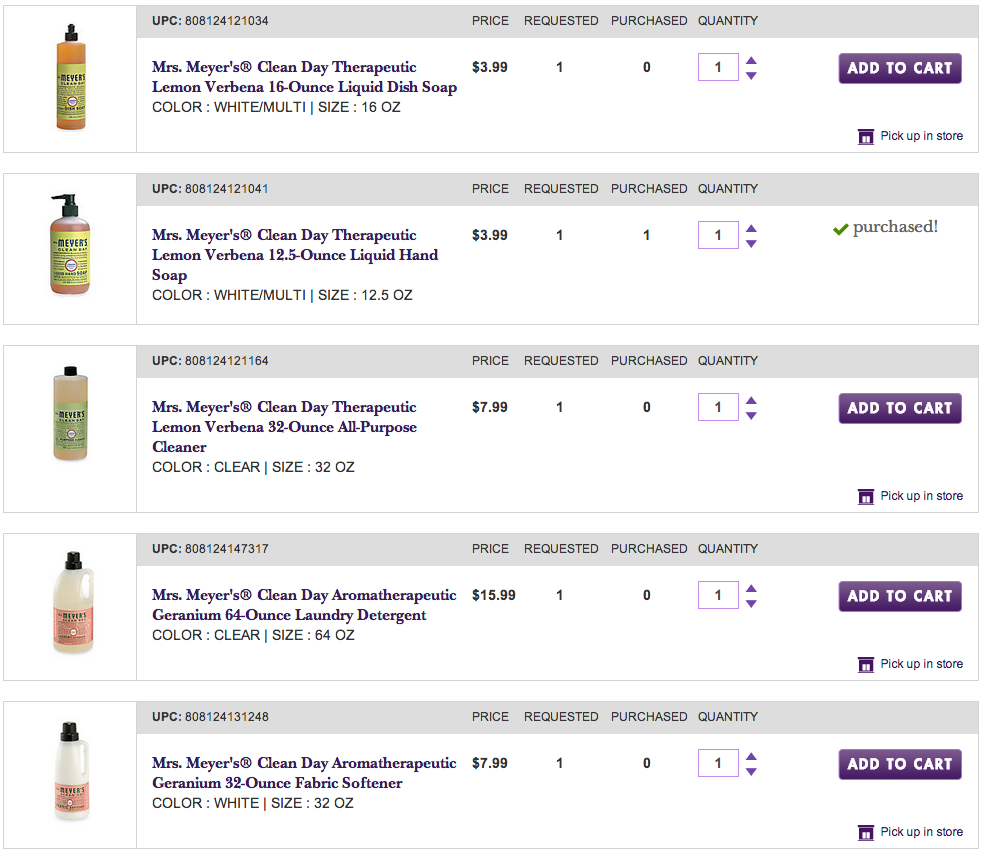 Hes registered for 5 types of soaps folks. His nose isnt the only thing he's keeping clean. Kirk knows the value of airing your dirty laundry IN HOUSE in stead of running to the media everytime you get criticized and hoping that someone else will take care of it. 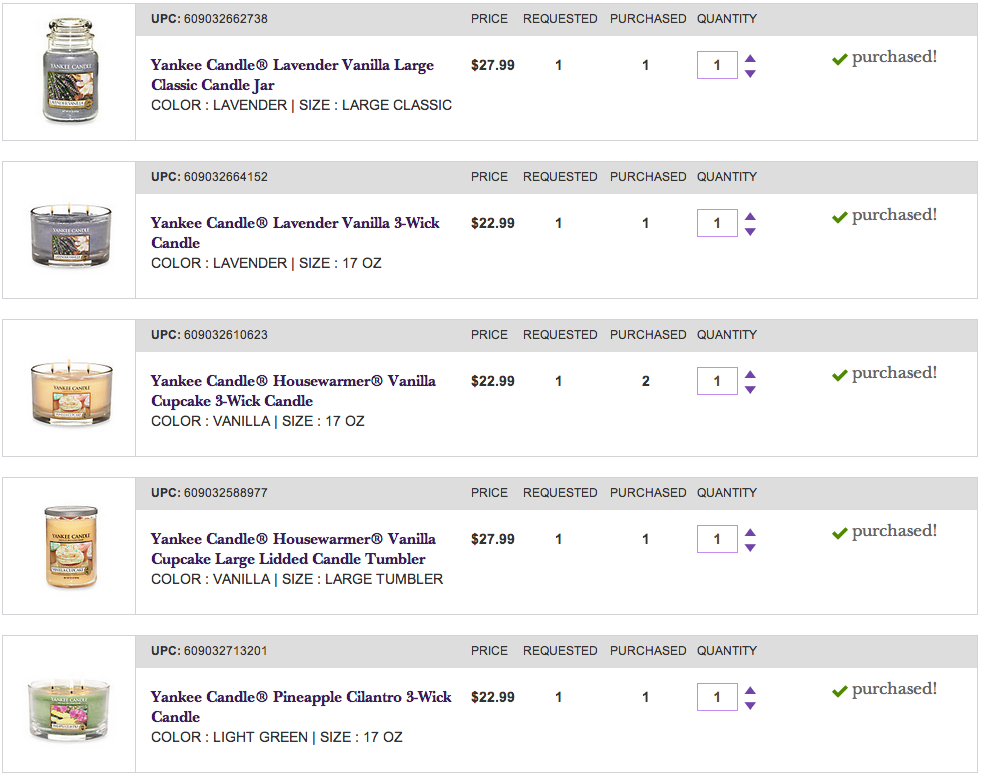 Under cleaning Robert Griffincense opted not to literally got 5 kinds of candles which only serve to try and cover up the stench, not actually DO anything about it. The Pineapple Cilantro flavor you have to imagine is a flavor noones ever heard of and probably a new flavor of Gatorade hes inventing too. The fact theres NO soap or detergent tells you he sends all his laundry away to be cleaned probly to the same PR people that handle the rest of the mess he makes for himself.

Now Kirks not above having some candles to set the mood, but when he registers for a candle he goes traditional so he can literaly burn the midnight oil staying up and actually learning the playbook instead of some kind of showoff distraction-type exotic Salsa candle that makes you think about the thick and chunky girlfriends you skype with opposed to clean simple Texas Tea Gods petroleum oil that keep your mind on the task at hand. With a oil candle you have to have teamwork w/ the flame its not just "set it and forget it" like Griffins instructions to Dr James Andrews.

Kirk got a self-setting alarm clock that you set once and it members it for you every day of the week. Kirk doesnt have any off-days,, his definition of "rise&grind" is making coffee and a bowl of Wheaties, not rub your eyes and prep your bong. Its also a selfsetting alarm clock meaning Kirk knows the importence of delegation and trusts his teamates and appliances to Do the Right Thing. He cant be looking over your shoulder every second to make sure your adjusting your routes or timezones, a leader should trust you and make you accountable to yourself. Unlike RG3 and his offensive linemen, Kirk knows the imporatnce of building good relationships with things that will help you get up folks.

This is literally the only thing he has under "clocks" folks. Im not sure what hes planning on putting in there first his rookie contract or his right knee,, The fact he wants a paper shredder shouldnt of suprised anyone considering we've all seen him destroying all evidence that he ever knew how to hit a receiver in stride. A one-cut type guy like Alfred Morris at least would have the humility to ask for a pair of scissors not some jukey shifty shredder that slices and dices but you still just end up throwing it away or falling into a sack.

Kirks got a sense of humor and is obviously a big King of the Hill fan here throwing a little wink are way. Knows the importence of making sure that all youre ties are accessible not just the ones in your knee or on the tips of your corn rolls, so he smartly registered for a rotating tierack. This also tells us that Kirks thinking he might get alot more camera time during those mid-week media sessions and if your a starting QB you need to project a business-first image and not like your a sandwich artist. 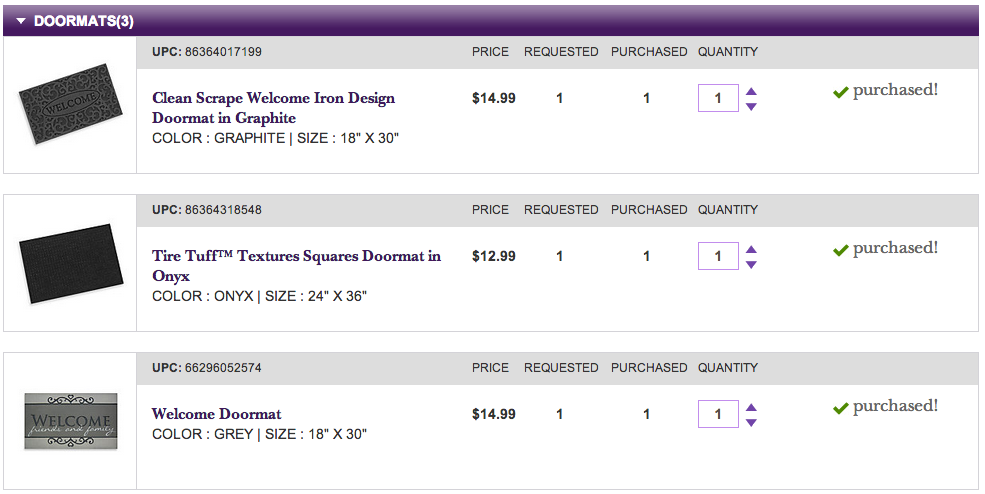 You cant make this stuff up folks. He got three types of doormats because as long as hes the Redskins starter, the NFC East wont have the Cowboys Gianst and Eagles to walk all over.

He literaly put 32 different types of crying towels on there one for everyteam in the league that wont offer him any guarenteed money soon as the Skins put him on waivers. Really how many can you have dangling from your waistband at any given time?

You had to know he was wreckless but literally how much of a mess is this guy making in his personal life if he needs 32 sets of 4 towels? Id say its a red flag but he'd just use it to wipe his fingerprints off something folks. What, does he need them for his ceiling because hes having couples massages with James Harrison or something? Thats the only explanation I can think of for needing 128 towels in your place.

For food that can be made while hes going through his progression's. His careers not the only thing thats a crock, these appliances make food that can be eaten just kindve whenever he damn well feels like it. Apparently RG3 prepares things like RG2 and just throws a bunch of mismatched stuff with awkward strengths and weaknesses together without giving any finall thought to how the finished products going to turn out. Much like Griffins career the slow cookers will really build your stock up but then the finished products watered down and disappointing and it just collects dust on a shelf for years.

I know Im suppose to remain neutral (which I've tried to do) but I mean come on. I had to buy the bluecollar guy a dang lunchpail folks: 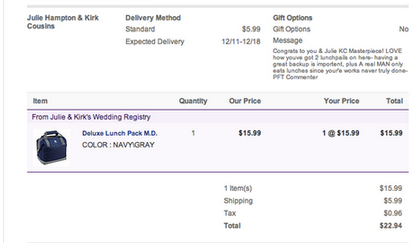 It doesnt take a brain surgeon to figure out which one of these guys Id want on MY team folks. I just dont know how much more clear you can make it that Kirk Cousins is a better football player at this point.

So congrats and lots of best success to Captain Kirk and Julie Washingtons next Power Couple. I'll keep my schedule free the weekend of the wedding IDC when it is just let me know Ill be there Kirk!