Panthers vs. Saints 2013 game preview: Battle in the Bayou

In one of the most anticipated games of the year, the upstart Panthers clash with Drew Brees and the boys.

Share All sharing options for: Panthers vs. Saints 2013 game preview: Battle in the Bayou

The Carolina Panthers have been fighting for respect all season, and they will get their chance to win over any remaining doubters on Sunday night in primetime against the New Orleans Saints.

New Orleans is almost impossible to beat at home in the Superdome, but it looked vulnerable in a 34-7 drubbing at the hands of the Seattle Seahawks last Monday. The Saints were battered, not able to muster 200 yards of offense, while the Seahawks all but clinched home-field advantage throughout the playoffs.

On the other sideline, no team is hotter than the Panthers. Head coach Ron Rivera has his team rolling with eight straight victories behind the No. 1 scoring defense in the NFL. Carolina is one of the surprise teams this season and could move into the No. 2 seed with a win over the Saints.

Carolina is led by a ferocious defense that can arguably claim it's the best in the sport. The best player on the defense is second-year linebacker Luke Kuechly, who has already amassed 102 tackles and a sack. Charles Johnson and Greg Hardy are solid pass-rushers off the edge, combining for 15.5 sacks. 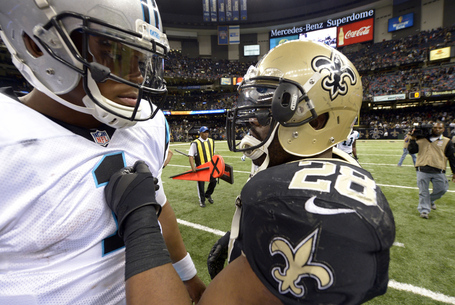 Cam Newton is still the focal point of the offense, presenting a dual threat every time he touches the football. Newton has thrown for 2,616 yards and 19 touchdowns, albeit accompanied by 11 interceptions and 31 sacks. However, Newton has already run for 447 yards and a half-dozen touchdowns.

Newton has some help on offense, with receiver Steve Smith still defying time. Smith, 34, has 54 catches and 632 yards along with a trio of touchdowns in his 13th season. Tight end Greg Olsen is also having a solid campaign with 50 receptions and 611 yards.

New Orleans is led by quarterback Drew Brees, who continues to build his case for the Hall of Fame. Brees has thrown for 3,874 yards and 29 touchdowns this season against only eight interceptions. Brees, at the age of 34, is going for his fourth season of over 5,000 passing yards, and third in his past four campaigns.

The signal-caller has some help with tight end Jimmy Graham and wide receiver Marques Colston. Graham is widely regarded as the best at his position, and he's backing up that notion with 68 catches, 988 yards and 12 touchdowns, all highs for tight ends this season. Colston47 receptions and 596 yards to lead Saints receivers.

The defense is nowhere near as good as the offense, but it has improved under first-year defensive coordinator Rob Ryan. New Orleans is getting a great year out of Cameron Jordan who leads the unit with 9.5 sacks. Rookie safety Kenny Vaccaro also looks like the real deal with 64 tackles including eight for loss, a sack and a pick.

James Dator of Cat Scratch Reader writes about how the Panthers can contain Drew Brees and the passing game:

It's up to Charles Johnson and Greg Hardy. The job is theirs alone to generate enough pressure off the edge to force short passing, while Luke Kuechly needs to become a lot better at covering tight ends. Carolina's hopes hinge on these areas, much as they did against New England.

Over at Canal Street Chronicles, Andrew Juge points out Parys Haralson's positive performance from the defeat in Seattle:

He was one of the better players. If I had to pick five guys that "showed up" in this one, Haralson would definitely be one. He was relied on more because of his run stopping abilities and his presence definitely slowed down Lynch. He was very physical with his tackles. Not known as a pass rusher, he also registered the team's lone sack. He made a nice play on an end around to Ricardo Lockette throwing him for a 2 yard loss. He had 5 tackles and a sack.

Be sure to check out SB Nation's team blogs, Cat Scratch Reader and Canal Street Chronicles, for more analysis and highlights from the game.

How I Learned to Stop Worrying and Love this Saints Season http://t.co/8DEHYelhlN

These are two really good teams built in different ways. One is loaded offensively with a decent defense, while the other has a tremendous defense with an average offense. The difference is the home field advantage the Saints have in the Superdome. Carolina is for real and if this game were in its building, I'd be going the other way on this. Yet, it is tough to see New Orleans dropping such an important one at home.

The Saints are favored by three points over the Panthers at home, according to Oddsshark.com.

New Orleans hits the road to take on the St. Louis Rams while Carolina plays host to the Jets.