Just how much of an effect can cold weather have on this year's playoff race and the Super Bowl?

Exactly how much of an effect does the weather have on a football game? How much does it change the tide of battle when a team travels to an open-air stadium in a cold-weather city? Are teams that play in domes "soft" to harsh weather? These are questions that are hard to definitively define, but if data is your thing, there are results to be had.

Fortunately, someone has already crunched the numbers, and rather thoroughly: Bob Sullivan of SportingCharts.com. Sullivan took a look at a lot of data since 1978 to try and determine whether or not home teams playing in cold weather fared better against teams who don't normally play in bad weather. It's a significant question given that the NFL playoffs roll around right about the time that the weather gets truly brutal.

Home-field advantage might be over-hyped in Week 1, but the question here is whether or not it's a weapon when winter rolls around. The first chart that speaks to this is simple: it's the home team's winning percentage in every game compared to games played between December and February: 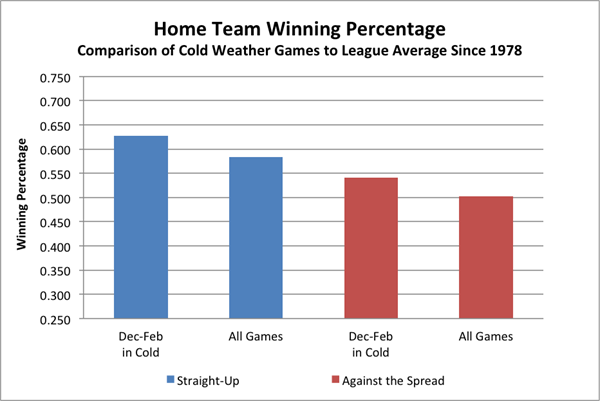 That is definitive in its own: cold weather seems to have an effect, a positive effect for the home teams who play in said weather. But Sullivan delved deeper and wanted to determine whether or not visiting teams struggled in different locales. That would be this chart here, which shows that the Packers and Patriots have the highest winning percentage at home in Dec. through Feb.

So that led to another chart, this one to demonstrate the home winning percentage of visiting teams against cold weather opponents from September to November to their winning percentages from December through February. That chart is below: 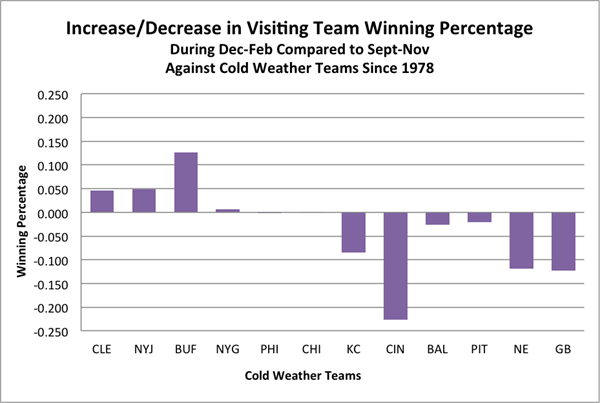 This chart shows that Buffalo really struggles down the stretch and that the Bengals receive a hefty benefit from the weather getting colder. There's plenty of more data to be had, so please check out the full article here. What we're going to do now is take a look at this weekend's games, as the playoff race is in full swing. There's plenty of cold weather to be had, as well.

There's many worth noting that don't have playoff implications, such as the warm-weather Miami Dolphins taking on the Steelers in Pittsburgh, and the warm-weather Oakland Raiders taking on the Jets in New York. But serious playoff implications can be had elsewhere. Then again, a Miami loss does factor in to multiple teams clinching, such as the Patriots, Chiefs, Broncos and Colts.

The Lions, despite playing in a cold-weather city, could struggle against the Eagles due to the fact they play in a dome. Detroit is 7-5 and atop the NFC North but not so secure in its spot. The Eagles are 7-5 as well, atop the NFC East and tied with the Cowboys. Cold-weather games could easily be a factor in Philadelphia making it into the playoffs this season.

Baltimore needs a win to stay in the running, and a Baltimore loss does allow for clinching scenarios for all of the Broncos, Chiefs and Patriots. But the Ravens play at home against the Vikings on Sunday. Minnesota is a cold weather team, but have been in the Metrodome since ... what seems like the beginning of time.

On Monday, the aforementioned Cowboys will take on the Chicago Bears. Dallas needs to win to hold its spot atop the NFC East -- they're tied with the Eagles, as mentioned before -- but Soldier Field is a tough place to play. The Bears are used to the cold weather, and it could get interesting.

Down the stretch, these things are even more important given the location of the Super Bowl: New York's MetLife Stadium. It will be a cold-weather Super Bowl, the first to ever be intentionally held at an open stadium. What if Drew Brees and the dome-team New Orleans Saints make it that far? Will the weather be as huge a factor as one might think? The data seems to back it up.