Stop us if you heard this one before -- Brady came back from a huge deficit to win in the final seconds. The Patriots move to 10-3 on the season.

Tom Brady recovered from a slow start to lead yet another comeback win over the Cleveland Browns, 27-26. Brady hit Danny Amendola with 35 seconds left to come back from a 16-point deficit

The game wasn't a wintry wonderland like most of the 1 p.m. games, but there were still chilly conditions at Gillette Stadium. Tom Brady had an ugly start to the game, throwing for just 5 yards in the first quarter. This screencap just about sums it up: 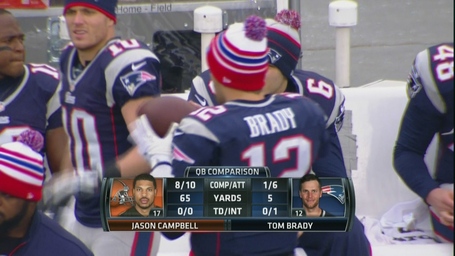 The Browns only got two field goals in the first half, but that proved to be enough for the lead. The defense held the Patriots to just 129 total yards and Brady completed only 7-of-19 passes for 95 yards as the Browns went into halftime leading, 6-0.

The Browns added to their lead with a 40-yard catch-and-run touchdown by Gary Barnidge. New England finally got on the board with a field goal, but Josh Gordon once again broke the game wide open. Gordon exploded for an 80-yard touchdown to give Cleveland a 19-3 lead. The Patriots finally found the end zone at the end of the third quarter when Shane Vereen ran it in from 6 yards out. They converted the 2-point conversion to cut the deficit to eight points.

After a touchdown by Jordan Cameron, the Patriots came back to within one possession when Brady hooked up with Julian Edelman with just over a minute to go. They got the onside kick back and used a pass interference call at the goal line to set up Amendola's game-winning touchdown. Billy Cundiff's 58-yard field goal attempt came up well short and the Patriots moved to 10-3 on the season.

Brady threw for 418 yards and two touchdowns in the winning effort. Josh Gordon had another huge game, grabbing seven catches for 151 yards and a touchdown.

Alfonzo Dennard left with a shoulder injury and was questionable to return. Rob Gronkowski was carted off after taking a helmet to the knee in a vicious-looking hit.

The Patriots were favored by 10 points, according to OddsShark. They failed to cover.