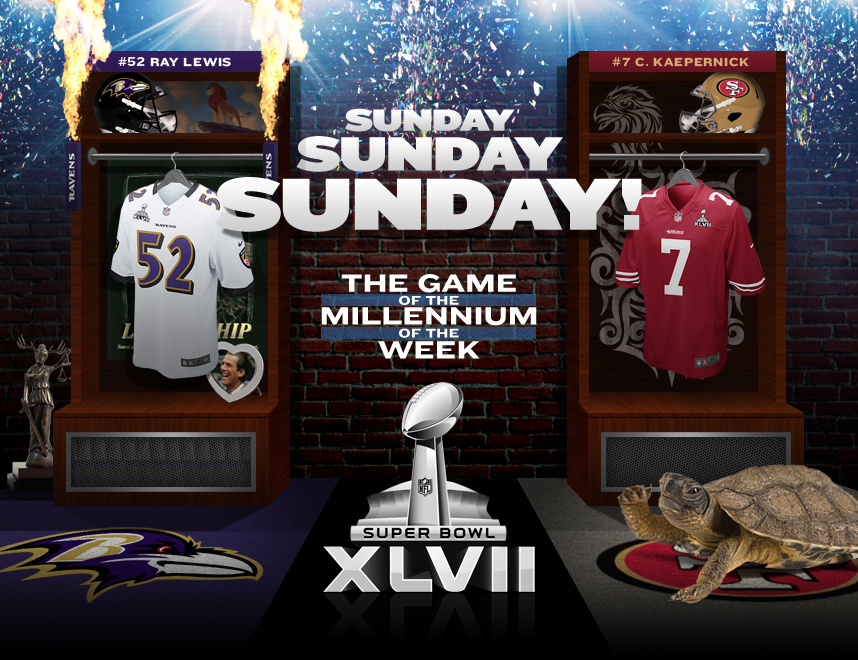 It's popular, in some quarters of the internet, to bemoan the hoopla jamming our national radar for the two weeks leading up to the Super Bowl. Conversations this week have included gay-bashing backup cornerbacks, the mystic powers of deer pheromones, the noble chicken wing, Rick Reilly on parenting, Tim Tebow (just because) and so many more conversations that immaturely scratch the surface of very important domestic matters.

The Super Bowl is America condensed into three and a half hours … and a seven-hour pregame show, two weeks of mindless conversation and the six months leading up to all of this. Man, that is football, the nation’s real pastime, played out in the most profitable sectors of broadcast television.

But you want to talk about football.

The Ravens won Super Bowl XXXV 12 years ago, the culmination of a 12-4 season in 2000. It’s actually kind of a surprise that Baltimore hasn’t been in the big game since then. This is the fifth straight season the Ravens made the playoffs, with head coach John Harbaugh reaching the postseason every year he's been at the helm.

Baltimore’s outward identity has always been its defense, a unit consistently ranked among the league’s best. In fact, the Ravens had a top-10 unit in each of Harbaugh’s first four years as head coach. This season was the first that the Ravens did not finish among the league’s upper echelon of defenses, thanks in large part to the ravages of age and injuries to cornerstone players like Ray Lewis, Haloti Ngata, and Terrell Suggs.

Hidden behind that label is a Ravens team that has actually been pretty adept and innovative on offense. Joe Flacco threw for a career-best 3,817 yards, 22 touchdowns, 10 interceptions and a solid 7.2 yards per attempt. His downfield work has been Baltimore’s best offensive asset, or maybe that’s “lucky” Jim Caldwell, who was installed as offensive coordinator in December after it sent Cam Cameron packing.

The 49ers also got by on their strength of their defense and the do-no-harm approach of Alex Smith installed behind an impenetrable offensive line. Leave it to a team like the Rams to force a change by sending Smith to the sidelines and giving Jim Harbaugh, the crazier of the two, an opportunity to install his guy, Colin Kaepernick.

You know what happened then, and you know it because every color commentator has rushed to embrace or condemn the pistol offense. A new take on the running game, the pistol is making football fun to watch again, despite the admonitions of Trent Dilfer.

San Francisco’s dynamic offense and a defense that held opponents to just 17 points per game this season has them favored by 3.5 points.

There, six paragraphs about the game. Now can we get back to our American Studies lesson?

Righteous Ray! His engine only has one gear and it's called HIT. Remember that Sunday. When is a game more than a game? When a guy like Righteous Ray makes us believers, too.

The name "Joe Flacco" sounds like it should belong to a 280-pound Italian mobster. Or maybe one of Ghostface Killah's aliases. The real Flacco is cool, but it would be much cooler if the Ravens had a 280-pound mobster quarterback. Or if Ghostface Killah could play in the Super Bowl.

What are the odds that two brothers would end up coaching against each other in a Super Bowl? 1 in 10,000,000? 1 in 10,000,000,000? Everything had to go right. The Ravens' Hail Mary in Mile High, the 49ers comeback in Atlanta. Crazy stuff, right? Wrong. There are no coincidences. Just open your stupid little sheep eyes and maybe you'll see the truth. You may have heard the Harbaugh sister is married to Indiana basketball coach Tom Crean. Do you know who's wining the 2013 college basketball title this year? 'Course you don't. "You never know with March Madness!" Keep telling yourself that, sheeple. Root for whoever you want on Sunday, just remember the free masons are always the winning team.

Colin Kaepernick is the classic "x-factor" who will be discussed at millions of Super Bowl parties all weekend, and nobody really knows anything about him. I mean, he's started 9 games so far. We know nothing about him besides his alma mater (Nevada) and his tortoise (Sammy). Otherwise? All we know for certain is that defending Kaepernick in this 49ers offense will be an absolute f***ing nightmare. Pray for Righteous Ray.

This week Randy Moss said he was the greatest receiver of all time, and if he goes out and catches three touchdowns in a win this weekend, this officially becomes everyone's favorite Super Bowl of all time.

Justin Smith is not only a key to the 49ers defensive success, but also a player who used the word "mollywhopped" on Super Bowl Media Day. We had no idea what it meant, but we do now! Thank you, Justin Smith. Go Niners!

What happens in Vegas stays in Vegas, amirite bros? New Orleans would like to remind you that this hoary maxim was spat by the braindead godfathers of MAN LAW and that unlike Las Vegas, the Crescent City tells no lies. The things you do in New Orleans follow you and stay with you in so many forms: the pounds around the waistline from eating three heart-collapsing meals a day, the pesky misdemeanor charges that give you an excuse to return and settle business in the form of more eating and debauchery, and the very real week-long hangover that will chase you onto the plane when you try to leave without it.

If you are there--and hello you, you lucky person likely traveling with a corporate Super Bowl junket--then you'll survive and even thrive as long as you follow a few rules.

1. Take advice. If a local tells you to go somewhere, then do so, and to hell with waiting three hours for a table at someplace just because you saw Anthony Bourdain eat there once. Go down the street, ask for alternatives, and if you have to wait outside in a line for an hour or two, buy a 12-pack and share with those around you. New Orleans' attitude is infectious, and that infection is accelerated by alcohol.

2. I'm telling you to drink. It is the only thing that makes a city built below sea level approach anything like sense.

3. Carry cash for cabs. More importantly, don't expect to get correct change, ever, ever, ever.

4. There is one time you have to remember a day: reservations for dinner. Everything else is part of some fluid time scheme stolen from a Gabriel Garcia Marquez novel. That's great that you're thinking about, "accomplishing things." New Orleans is not.

5. Do your duty and buy that hardworking French Quarter cop a beer, won't you? 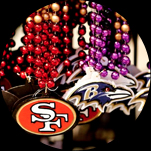 At media day, Patrick Willis was asked about being responsible this week, and potentially getting down to Bourbon Street. He seemed to be almost entirely serious saying he didn't know about Bourbon Street and he had just been spending time with his parents and getting ready for the game. They key to this game could be which team parties less leading up to the game. 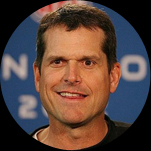 Jim Harbaugh thinks his son is ready for some football.

For a season and a half, Jim Harbaugh has been relatively prickly with the media. Super Bowl week however, has brought him out of his shell. Jim was asked about President Obama's comment that he would not want his son to play football. Harbaugh mentioned his 5-month-old son Jack Harbaugh and how that meant there was one less person competing against him. Jim's son is still small, but once he grows into his giant head, he'll be a force. 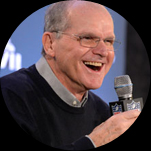 It's a family affair.

The Super Bowl is going on, and the Mannings aren't the most popular family of the week. That honor goes to the Harbaughs, who have already seen Jack and Jackie, the parents, hold their own press conference. The over/under on the number of times Jack Harbaugh is shown on TV is set at 1.5, which seems low. The over/under on the number of times the name Harbaugh is mentioned is 20.5, which also seems low. Take the over and enjoy a Super Bowl without the Mannings. 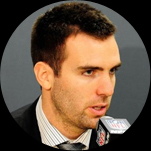 What was that about being elite?

En route to the Super Bowl, Joe Flacco's Ravens beat Andrew Luck, Peyton Manning and Tom Brady. Flacco, who has eight touchdowns and no interceptions this postseason, is one touchdown away from throwing nine touchdowns and zero picks. The only two quarterbacks to do that in a postseason? Joe Montana and Steve Young. So what was that about being elite? 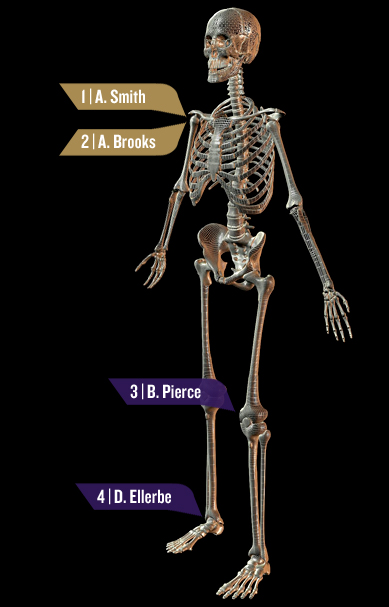 Smith hasn't recorded a sack since Week 14. Will that change this weekend?

Brooks has a shoulder sprain. He's also apparently working his way through an old finger injury. No worries, though, 49ers: there's no question he's playing.

He out-rushed Ray Rice in the AFC Championship game and will play on Sunday against the 49ers. He's been on the injury for a few weeks now with a knee injury. Expect him to play.

This is really the only injury concern for the Ravens, and Ellerbe is probably going to play. The Ravens need all the healthy linebackers they can get to defend Colin Kaepernick. I'm not sure five linebackers could completely stop him. 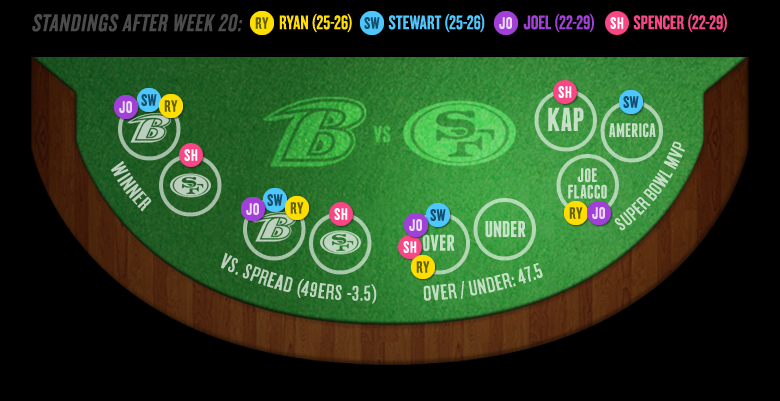 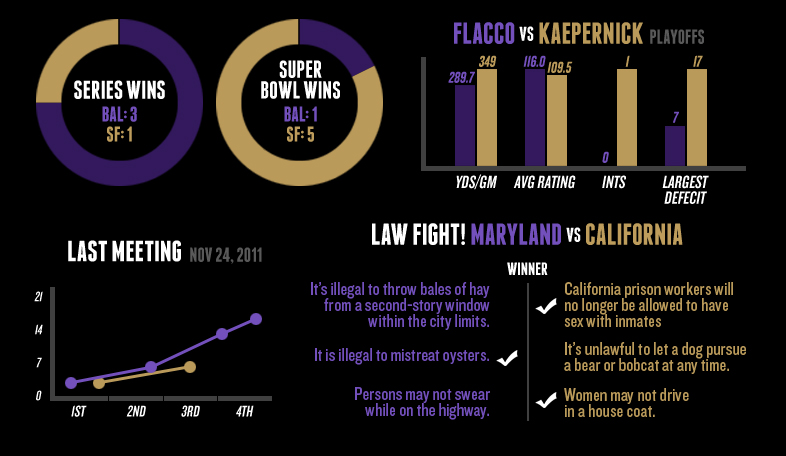 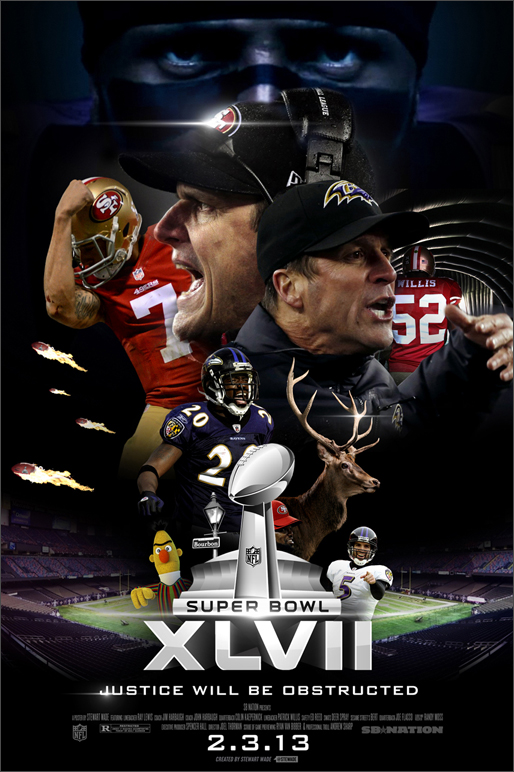 "What do you judge his eliteness on?" NFL Network asking the best questions right now

I waited for like 10 minutes at Joe Flacco's podium for a memorable quote to tweet. Sorry guys, I got nothin'. #SB47 #MediaDay #Zzzzzzzzz