It's tough to be in a new city. You can never find what you're looking for.

Share All sharing options for: What is Alex Smith doing right now? Feb. 1

Alex stood on a bustling street corner on Bourbon Street, furrowing his brow at a clutch of maps and handwritten notes. Finally he sighed in exasperation and started looking at the passers-by, trying to pick out someone who looked like a "local." (This mostly involved looking for people not wearing grey "Super Bowl XLVII" crew-neck souvenir sweatshirts.)

Finally, Alex found a busker who was playing a rendition of "Call Me Maybe" on a guitar with two strings. When Alex had confirmed that the man was a local, he conspiratorially slipped a $5 bill into the busker's open guitar case and inquired as to where he might find "the good Applebee's." The busker directed Alex to an Applebee's storefront on General Degaulle Drive. Alex thanks the man and set off, a huge grin breaking over his face.

When Alex arrived, however, his heart sank. He looked around the Applebee's, muttering to himself. "Aw man, oh no. This isn't ... mannnn." When Alex stepped to the podium and was informed that there was a 45-minute wait, he lowered his voice to speak to the hostess.

"Uh, excuse me ... I believe there's been some mistake. Can you direct me to the good Applebee's?"

"The, uh." Alex looked around, nervously. He was almost certainly overstepping the bounds of good manners, but this was serious. "I'm looking for the good Applebee's."

The hostess stared at Alex for a few seconds before responding. "This is the only Applebee's in New Orleans, sir." Alex stared back, his eyes pleading. "Uh ... there's an Applebee's in Harahan. I guess that's the next-closest one."

Alex beamed. "Thank you! Oh, thank you, ma'am!" He dashed out of the restaurant and hailed a cab.

Although the cab driver looked puzzled, he drove Alex the 12 miles to Harahan. When they pulled up to the Applebee's, Alex's smile faltered. He paid the fare and then held a 20 out to the driver. "Wait here for me," said Alex, his expression grim. "Just in case." The cabbie shrugged and nodded.

Two minutes later, Alex came trudging back to the cab, slamming the door in disgust as he got in. "Problems, buddy?" asked the cab driver.

"This isn't the good Applebee's at all. But there's still another shot. There's an Applebee's in Metairie."

The cab driver turned around and regarded Alex. "You want me to take you to a different Applebee's?"

"Buddy, I can take you to a dozen different places that are better than any Applebee's."

Alex fixed him with an icy stare. "I want to go," he said coolly, "to the good Applebee's."

The cabbie shrugged once again. "Your funeral," he mumbled as he dropped the car into gear. The drive to Metairie was less than five miles. When they pulled up, Alex's smile once again broke over his face. "Yes, yes," he said breathlessly.

The tipped the cab driver well over 20 percent and strode briskly inside. He looked around eagerly. Yes, this looked right. This definitely looked right. Not many people, but this was almost certainly the place.

He was shown to his table and was handed the familiar, comforting menu. He thanked the host cordially and began giving the menu a cursory once-over (heh, like he didn't already know exactly what he wanted). Then it hit him. There was no music playing. The interior was brightly-lit and antiseptic. It didn't look like a neighborhood bar and grill at all. It looked more like a ... dare he say it ... Marie Callender's. 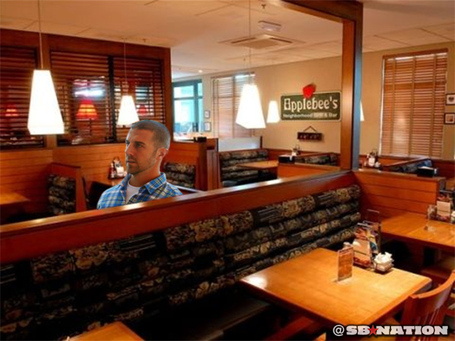 Somehow he had been duped. This was not the good Applebee's at all. How could he have been so stupid? Still, his stomach rumbled. He decided that any Applebee's was better than no Applebee's. How bad could it be? He thought. Stop moping and start eating good in the neighborhood.

But it was even worse than he feared. The spinach and artichoke dip was completely tasteless. The crunchy onion rings were far from crunchy. The Sizzling Double Barrel Whisky Sirloins weren't even worth one barrel. Maybe half a barrel at best. Not even the dessert shooters could save this meal. When he dropped off the check, the server noticed Alex's sullen demeanor.

"Hey pal, what's the matter? Didn't everything taste all right?"

Alex shook his head, talking more to himself now. "I just wanted to go to the good Applebee's."

"Oh. Well you probably wanted the one in Kenner, then."

"Yeah, that Applebee's is great. Real solid operation over there."

Alex allowed himself to feel hope in the first time in what seemed like forever. Now he knew where it was. And after all, he told himself, there's always dinner.

You're gonna come out of this OK, Alex Smith.