A night in Charm City

The Ravens Super Bowl was interrupted by a blackout in New Orleans and nearly turned into the biggest collapse in Super Bowl history. What was it like in Baltimore?

Share All sharing options for: A night in Charm City

"The bathroom's where it's at right now," my friend told me around five o'clock Sunday afternoon. "A drunk guy is in there imitating Ray Lewis' pregame speech." Because Baltimore is the best.

Me and two friends decided to make the trip on Sunday because if you can't have a favorite team in the Super Bowl the next best thing is hopping on someone else's bandwagon. Also, it's a 45 minute drive from D.C., so why not? Maybe we could see some horrible rioting, win or lose. See the insanity up close, we thought.

The highlight of the pregame festivities was Barack Obama's CBS Interview. About 500 people groaned at once, and then about 30 seconds into the buzzkill the bar cut the CBS sound and just started blasting "Seven Nation Army", the unofficial Ravens anthem.

We would hear this song approximately 150 times on Sunday.

A little later, after four hours wading through an ocean of Ravens jerseys and guys in bootleg Ray Lewis t-shirts ("RAY-LENTLESS" and "RAY'S LAST RIDE") and girls in bootleg Ray Lewis t-shirts ("52 shades of RAY"), Jennifer Hudson and the children from Newtown sang "America The Beautiful", and the bar went apeshit. Seven Nation Army time again, and for the first time all day we were actually (almost) watching football.

The first Niners play from scrimmage went for 20 or 25 yards to Vernon Davis, leading to a moment of silent panic for the 500 or so people in the bar, and then ... flag.

It didn't even matter when one of the Ravens drives ended with a failed fake goal. Everyone was in too good a mood to care. When Jacoby Jones scored on that outrageous Hail Mary, the entire bar jumped up and down for a solid 90 seconds, drinks were spilled, sloppy high fives were given all over, and the first half ended with more Seven Nation Army.

We watched the halftime show from a crowded deck outside, where one 20-something fan yelled, "I lost a tooth today!" I asked him how it happened and he said, "Celebratin', somebody knocked me in the face. I don't give a fuck, I love my team! It was a replacement tooth anyways." Perfect.

Cue Beyonce, and halftime commentary from a crowded deck full of smokers.

"Is that Tom Petty?"

"How many of them are there up there?"

"Did somebody slip ecstasy in my drink?"

"Does that lady play saxophone?"

Great halftime show. Then the second half started with Jacoby Jones and his 108-yard kick return, and the drink spilling started all over again. 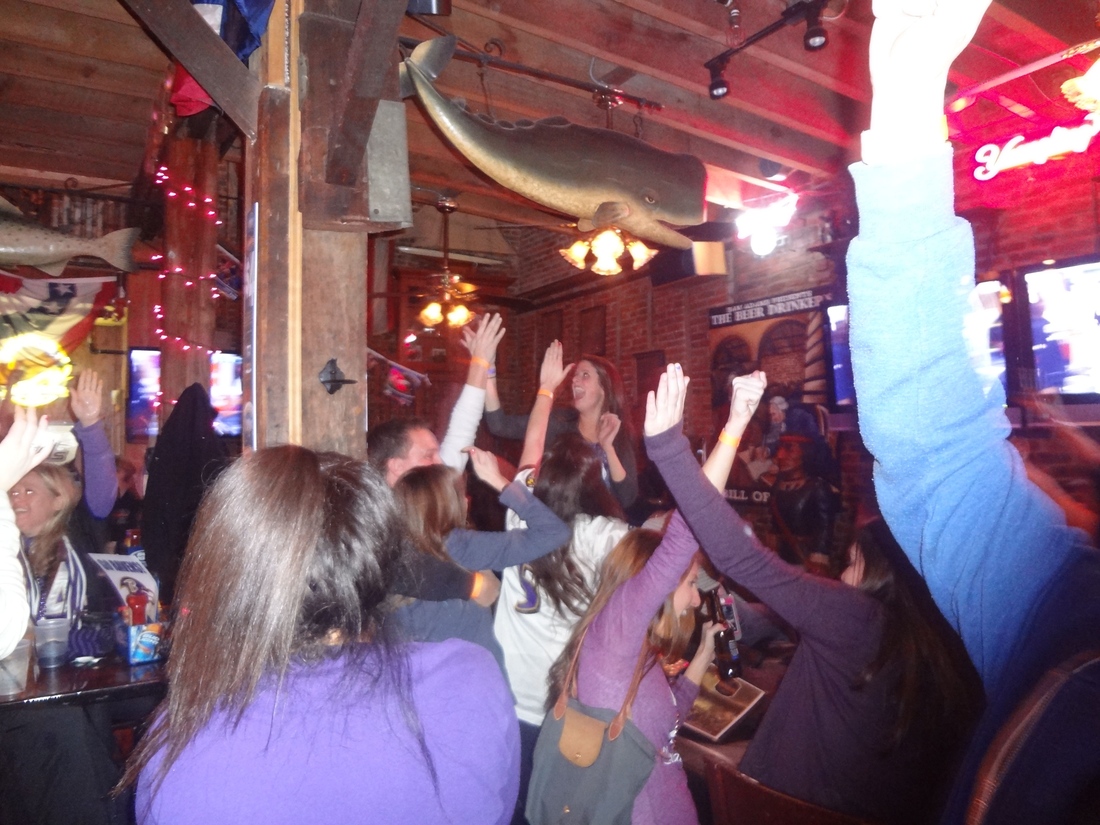 Then it all fell apart. As soon as the blackout happened, a college girl said, "This is gonna kill our momentum!" She was laughing as she said it, but then ... Over the course of 30 minutes the blackout sort of sobered everyone up. Everyone just sat there and stared at the TVs dazed. Something like that happened to the Ravens too.

We were basically watching the worst possible nightmare for sports fans. CBS showed Haloti Ngata getting injured and my friend leaned in to whisper, "This is all setting up for one of history's all-time great riots." Amazing to watch, but then also heartbreaking, and maybe a little terrifying. Everything that went right in the first half was now going wrong.

It all led to that final Niners drive. The college girl who'd joked about the blackout was now sitting on a pool table with her head in her hands. Faces froze all over the bar. With the Niners on the 5 yard-line, "can't believe the Ravens are really gonna win the Super Bowl!" became "Oh my God. No. No. No. Why? Please."

But the Ravens stopped them! Somehow. Just when it felt like we were destined to watch the most painful collapse in Super Bowl history, Jimmy Smith held Michael Crabtree, the refs didn't call it, and the Ravens took control again. Maybe you think that's unfair, but given the 34-minute timeout the 49ers got in the middle of a blowout, it probably evens out in the end.

It went from universal ecstasy to universal horror to exhausted relief. Someone tried to start a Seven Nation Army chant after the final fourth down and got scolded. The Niners weren't technically dead yet, and I think everyone was still too shellshocked by what almost happened. But eventually the clock hit zero, and the anarchy came back. The bar spilled into the streets immediately along with 10 or 15 other bars and Seven Nation Army started all over again.

Within about three minutes someone was climbing a tree. 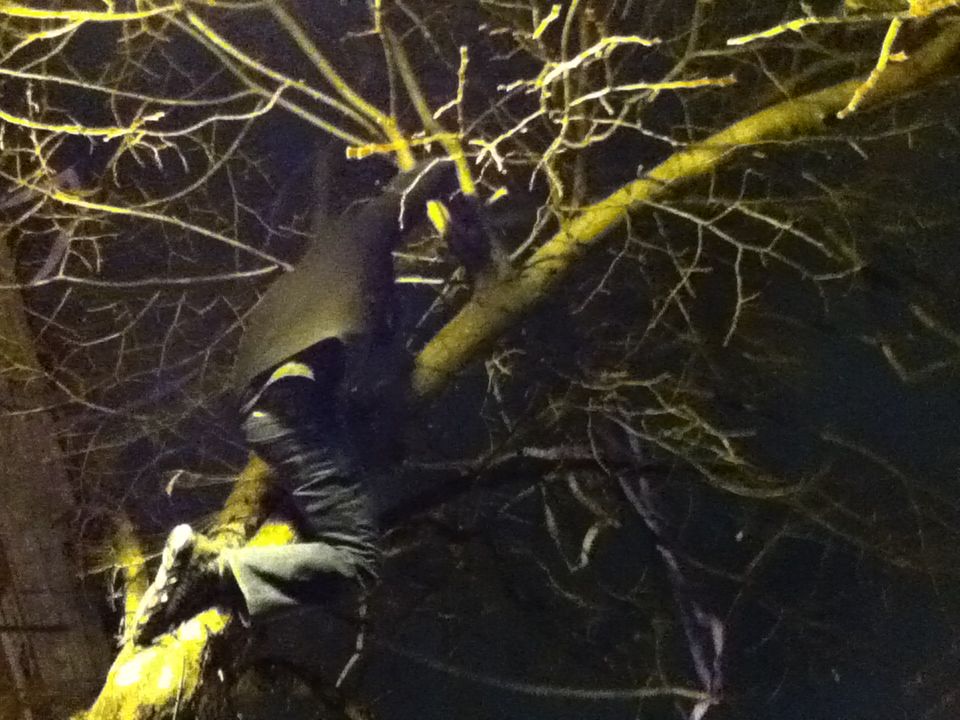 And 30 seconds later there was this cop shining a laser pointer on him. 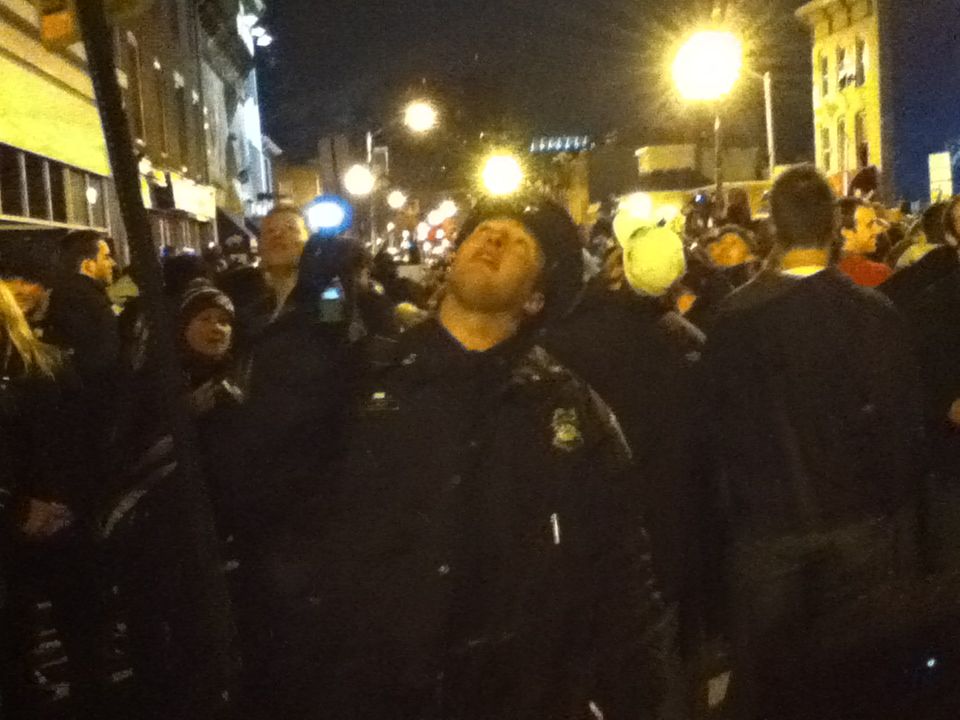 Then he clicked a button and that laser gun became a taser that he was shooting. He didn't hit the tree-climbler and the fan came down on his own, but you have to wonder: Was the cop going to tase him out of the tree? Because that doesn't seem very safe. These are the questions that get asked during a championship celebration.

Across the street a guy was shirtless and trying to climb a wobbling mobile TV tower. Someone was doing pull-ups on a street sign, a guy jumped from his window into a tree in the street, there were two girls on top of guys' shoulders who started aggressively making out, and right about that time someone a few feet away said to nobody/everybody, "This street light needs to come down. THIS STREET LIGHT NEEDS TO COME DOWN."

But no street lights came down, and at least where I was, it was all about as peaceful as thousands of blackout drunk fans can possibly be. This may have been disappointing if you were looking for chaos, but probably appropriate. Everything on Sunday was so close to absolute disaster, but then it turned into the opposite. Snow flurries came down, people sprayed champagne through the crowd, and everyone was in the middle of a perfect night. 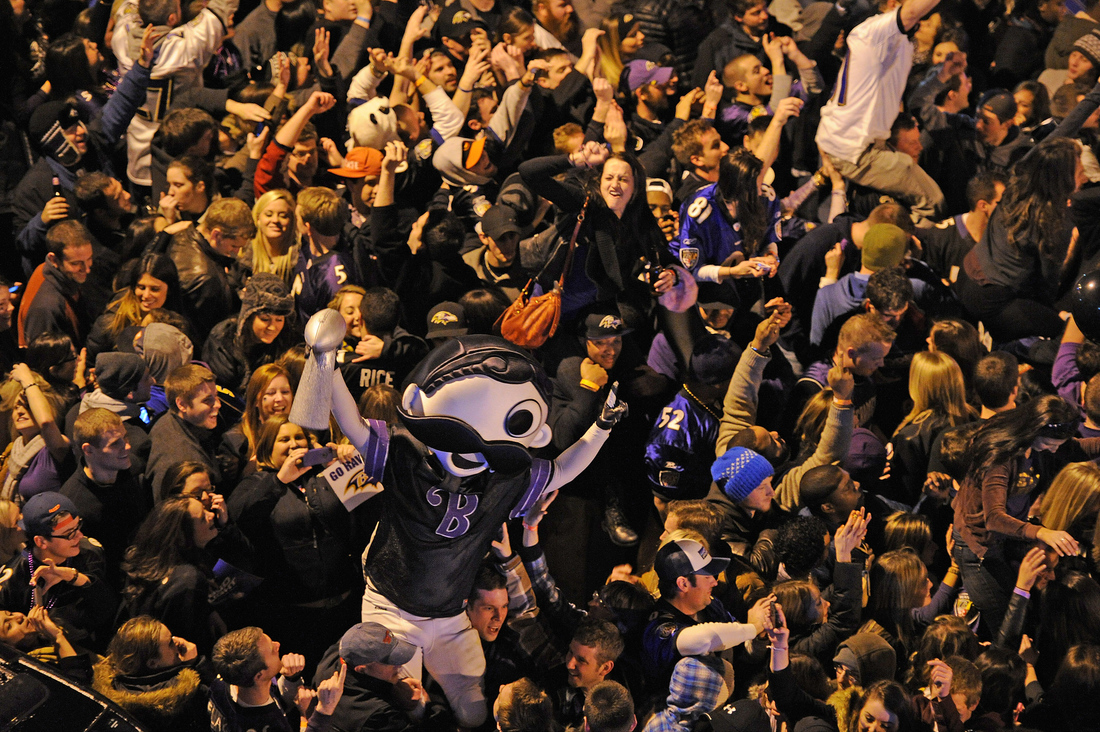 Every 10 minutes or so they broke into that satanic chant, too.

I'll probably never hear that stupid song again without thinking of that exhausting day and night in Baltimore. And that's cool with me, because it was pretty much the entire spectrum of sports insanity packed into one surreal four hours.

We left around midnight, completely exhausted.

My friend bought a "BALL SO HARD: SUPER BOWL CHAMPIONS" t-shirt in a 7-11 on the way out, and as we shuffled to the car two teenage Ravens fans sprinted toward the celebration yelling, "Everybody else shut the f**k up!" Because Baltimore is the best this year.