In defense of Jay Cutler, a heel America should get behind

Share All sharing options for: In defense of Jay Cutler, a heel America should get behind

Jay Cutler will never be seen selling his soul to a denim company, sitting on the back of a pickup truck, petting a dog and tossing the ol' pigskin around with a group of friends while a cheesy guitar riff plays. Jay Cutler will never do this because he does not give a shit. He does not care for branding or synergy or selling himself to the public, he certainly has no interest in capitalizing on the same mushy middle American values that Brett Favre never thought twice about pursuing. There's money to be made in those endeavors, sure, but Cutler couldn't be bothered to go through the trouble. He doesn't put on a face, he doesn't even pretend to care about anything other than winning football games.

This is just part of what makes Jay Cutler an endearing asshole, the sort of sports heel that should be embraced, not persecuted, by the public. Want the aw-shucks, beer-and-chicken everyman approach of Favre and others? There's plenty of athletes willing to sell that to you. But for the type of people who appreciate no-bullshit brashness, self-identify with 2Pac songs and preferred the nWo, Jay Cutler is your quarterback. Cutler does nothing if not keep it real, but unfortunately keeping it real has a propensity to go wrong.

Forbes released its annual list of America's most disliked athletes earlier this week, with few surprises. There was Lance Armstrong, he of the doping scandal, the constant lying and the Oprah interview. There was Manti Te'o, he of the fake dead girlfriend. There's Mike Vick, there's Kobe Bryant, there's Alex Rodriguez, all men who have given this country plenty of ammunition when it comes to sports-hate. But why is Jay Cutler No. 4, snagging just a 21 percent appeal rating? Is this country really that lame?

Truth is, there's a fine line between Cutler and Favre. There are certainly plenty of similarities. One is from Indiana, one from Mississippi; there's no pampered New York or Los Angeles upbringing for either. If Favre made 'gunslinger' a mainstream description for strong-armed, reckless quarterbacks, Cutler has carried it for a new generation. America loves to romanticize the notion of quarterbacks as leaders, not only of football teams but also for entire cities. Jay Cutler is a leader, but he's merely the leader of the Chicago Bears. Oh, Cutler does plenty of charity work and other good deeds, he's just not about to call attention to himself. Cutler simply isn't the leader of Best Buy endorsements.

Even Forbes' description of why Cutler is so disliked is unconvincing:

Quarterback, Chicago Bears
Appeal: 21%
Seen as standoffish with teammates and the public. Fair or not, the sight of Cutler riding a stationary bike on the Bears’ sideline after pulling himself from a 2011 playoff game still lingers as a symbol of softness.

Might I remind you that Jay Cutler sprained his MCL in the aforementioned NFC Championship game against the Green Bay Packers a few years back. You wanted him to stay in the game? Then don't criticize Mike Shanahan for how he treated Robert Griffin III in this year's playoffs. Because that's exactly what would have happened had Cutler stayed in that game. He would have been ineffective because he wouldn't have been able to plant his foot to throw. His mobility would have been destroyed. He would have been hurting the team and risking a more serious injury. All of this happened to RGIII, and he was lauded for his toughness. Cutler got called the p-word in living rooms across America and faced an unprecedented amount of criticism from his peers, led by Jaguars running back Maurice Jones-Drew.

Honestly, it's hard to believe Cutler's Q-score has anything to do with the 2011 NFC Championship game at this point. People do not remember what they ate for dinner last night, let alone a football game from three years ago. So then why does Jay Cutler remain so reviled? It's mostly, I think, because of his face. 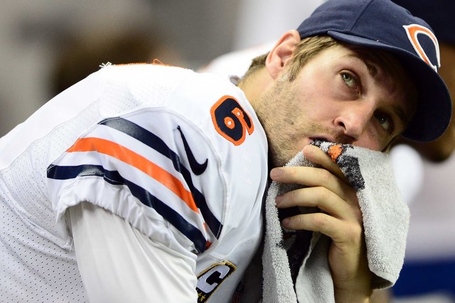 Let's just say that our photo tool has a lot more pictures of Jay Cutler sulking, pouting, yelling or scowling than it does of him smiling or jumping or raising his arms above his head in triumph. Cutler has been criticized for the most senseless thing possible since entering the NFL: bad body language.

So what does that mean, bad body language? It's something Bill Simmons and other sportswriters have been harping on for decades, as if slumped shoulders somehow correlate with wins and losses. Bad body language is supposed to show a lack of leadership, a lack of caring, a lack of toughness. Oh, Jay Cutler is very tough.

Have you watched the Bears play over the last four seasons? There's one undeniable fact about the team: Jay Cutler takes a beating. Cutler was sacked 52 times in 2010, the most in the NFL. He was sacked 38 times in 2012, fifth-most in football. The only reason he wasn't among the league leaders in taking a beating in 2011 was because he broke his thumb midway through an impressive start for the Bears by trying to make a tackle after his wide receiver slipped and cost him an interception.

Jay Cutler may be petulant, but you can't argue he isn't tough. Sidney Crosby and Justin Morneau nearly missed entire seasons due to a concussion. When Cutler suffered his seventh career concussion against the Houston Texans in 2012, he sat out one week and returned the following game. He is likely too tough for his own good.

It's important to note the disconnect in Cutler's popularity nationally and in Chicago. In Chicago, he is loved. Bears fans have been cursed by a lifetime's worth of football's most pathetic quarterbacks; all you really need to know is that many of the franchise's passing records are still held by Sid Luckman, a man who made his debut in 1939. In between there's been Craig Krenzel and Chad Hutchinson and Rex Grossman and Henry Burris and plenty of others. Cutler is just obviously so much more talented than the entire lot that Chicago might even defend him a little too strongly. What can we say, having a quarterback who can actually throw the ball more than 20 yards with velocity remains a very weird thing for us.

It's fitting that Cutler's fiance, former reality TV star Kristin Cavallari, made headlines on the heels of the Forbes list by announcing that Cutler had proposed to her via text message, and that he sent the diamond ring through the mail. This is a premium Cutler story, almost too good to be true, even if it was the second time the couple had become engaged. It's Cutler's too-cool detachment manifesting itself in the most hilarious way possible.

Just one question: why the hell would Cutler's wife-to-be sell him out like this? Did she not think it would only give the haters more ammunition? Thing is, the negative PR likely won't even faze Cutler. He is about football, and nothing else. So keep hating, America. Jay Cutler has but one response: "DOOOONNNNTTTTTT CAAAAAARRRREEEEEE."

Ricky O'Donnell is an NBA assignment editor at SB Nation. Email at richardpodonnell@gmail.com or follow on Twitter.