The Chicago Bears are doing everything they can to put Jay Cutler in a position to succeed. It's about time.

NFL quarterbacks are perhaps the most valuable occupational commodity in this country -- if you think that's an exaggeration, try finding a competent doctor/lawyer/point guard in your local directory, and there will certainly be more than, what, nine worthy candidates. For as much as America lives and breathes football, it sure does a poor job at developing the most important position in the sport. NFL teams can't even think about finding success before finding a quarterback, a lesson the Chicago Bears know all too well. And once you have one, a talented quarterback is too rare, too fleeting not to be put in the best position possible to succeed.

It finally appears as if the Bears have learned this lesson, too. 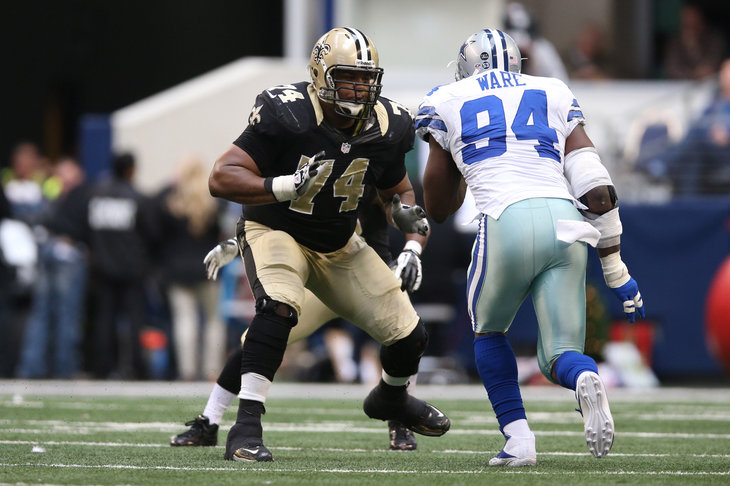 Teams are dropping players and signing new ones to big contracts at an alarming speed. Keep tabs on all the news and rumors from the NFL's free agent period.

The Bears signed tight end Martellus Bennett and left tackle Jermon Bushrod at the start of NFL free agency on Tuesday afternoon. It follows a pattern that's been in place since the moment the regular season ended, when the 10-6 Bears were shut out of the playoffs. It's all about Jay Cutler. If the embattled quarterback can't find his footing in his fifth season in town, at least the Bears can say they did everything they could to help him succeed.

It started around this time one year ago when the Bears acquired Brandon Marshall, the big, physical target in the passing game Chicago's offense desperately lacked during Cutler's first few years in charge. Marshall was tremendous in his debut season with the Bears, breaking every franchise record imaginable, but the team still finished with an offense that ranked No. 28 overall in yards.

Something had to change, and so it did. Lovie Smith was a fine coach, but his offense underperformed in all of his nine years in Chicago. He was fired. That the Bears went to the CFL to hire little known Marc Trestman was general manager Phil Emery's first sign of pushing his chips towards the middle of the table -- you don't change decades worth of offensive ineptitude with a retread hire, so Emery took a major risk on a purported genius with high upside and no NFL experience since 2004.

The signings of Bennett and Bushrod would be another step. The Bears' tight end play has been at league-worst levels since the team traded Greg Olsen after the 2010 season. The offensive line, particularly blindside protector J'Marcus Webb, has been the sort of widely-publicized running joke that is seemingly only topped in pro football by whatever mistake the Jets make next. Emery was lauded for his exhaustive coaching search and dedication to finding and understanding data in making roster decisions, but it didn't take a football genius to figure out the Bears desperately needed an upgrade at tight end and left tackle.

After years of ignoring obvious problem areas, the Bears finally did something that passes the sniff test.

That's why the signing of Bennett and Bushrod is so important -- after years of ignoring obvious problem areas, the Bears finally did something that passes the sniff test. Whether Bennett and Bushrod can live up to their new contracts is another matter.

Bennett replaces the incumbent Kellen Davis, so if he doesn't endear himself to Chicago immediately, something is likely very wrong. Davis became the focal point of Chicago sports hatred over the last two years -- yes, trumping even the Bulls' Carlos Boozer -- thanks to his penchant for falling down and dropping passes. In his place, the Bears added a 6'6, 265-pound specimen who once declared for the NBA draft out of high school. He has all the tools but his own history of disappointment.

Bennett had a career season for the New York Giants in 2012, but his flubbed days as a member of the Dallas Cowboys are still easier to remember. He was painted as lazy and unmotivated on HBO's "Hard Knocks" during his rookie training camp and didn't get in the end zone in his final three seasons in Dallas. Bennett has a big personality perfect for a city that loves to embrace its athletes. Sometimes he raps about Cap'n Crunch:

The Bears won't try to shelve Bennett's candor as long as he's catching passes. It can't get any worse. Chicago targeted its tight ends fewer than any other team in the NFL last season. The 33 catches made by Bears tight ends were the worst in the league at the position. Bennett's best years should be ahead of him, but even replicating the type of production he provided in New York last season (55 passes for 626 yards and five touchdowns) will go a long way toward fixing a broken offense.

That Bennett can block, too, is another added boon. Cutler needs protection even more than he needs weapons, which is why Bushrod was inked barely an hour after Bennett's signing was announced.

A surface-level look at Bushrod is promising: He protected Drew Brees' blindside on one of the best units in the league for years. He has two Pro Bowl appearances and a Super Bowl ring. He'll also be replacing another player who served as the bane of Chicago's collective existence, Webb at left tackle.

Bushrod was always likely to get overpaid having protected an elite QB for a high-octane offense. 44th in Pass Blocking Efficiency in 2012

What's interesting is that none of this will come as a surprise to Emery; he made the decision to give Bushrod nearly $18 million in guaranteed money -- the biggest contract for an offensive lineman in franchise history -- despite what the data told him. Emery named PFF as a valuable resource at a press conference after he fired Smith and is the type of evaluator who would never turn a blind eye to analytics. Emery and new offensive coordinator Aaron Kromer, who worked with Bushrod on the Saints, see something that makes them believe this is a start to a cure for the Bears' always troubled offensive line.

And it all circles back to Cutler. This town perceives him as the franchise quarterback the team has never had, but the numbers tell another story. There's always been excuses -- a new offensive coordinator every year, poor protection, no weapons. The excuses are starting to disappear. It's a good thing: Cutler is about to turn 30 and has just one season left on his contract. He's playing for huge money this season and will get it if he finally turns in the season Chicago has been waiting for.

The Bears had an opportunity with Cutler when they traded for him before the start of the 2009 season, and plenty has changed since. The window is still open, but it won't be open forever. That looks like a good thing, too -- a sense of urgency can do wonders, and it appears the Bears are fully aware of it.