Free agency shook up NFL depth charts over the past few days. So, naturally, we need whose stock is rising and falling in fantasy football for 2013.

No need to worry. We're here to bring you way-too-early analysis on some of the top names on the move, and what their fantasy prospects look like for 2013. Let's examine some of the new signings.

How free agency changes the draft 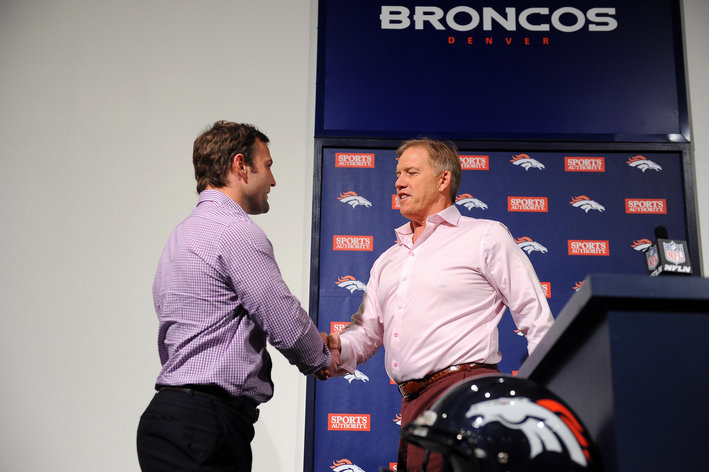 March spending binges will give the draft a different look than previously anticipated. Read more about how teams are expected to adjust their draft boards based on this week's signings.

Miami threw a ton of money at the speedy wideout to finally give Ryan Tannehill a true downfield weapon. Don't get too excited, though. Wallace shouldn't be in your top 15 rankings going forward. Everyone benefits from his signing with the Dolphins. But, his own value takes a hit.

A total of three touchdowns went to Dolphins wideouts last season. Three. Take into account that: Tannehill has matured a year, Brian Hartline now plays a more suitable No. 2 role, they now have a player with the ability to take the top off coverages. With all that in mind, three total touchdowns will increase substantially, but it won't make Wallace a WR1. You can draft him in the middle rounds and be satisfied.

Hartline looks like a decent PPR candidate. Tannehill shouldn't be on your draft radar. There's upside with this group. Just don't get over-anxious about Wallace running go routes in South Beach.

Is Welker a system player, or is he the real deal? We'll find out come this fall. No longer a beneficiary of Tom Brady's production, Welker heads to Denver to play with another star quarterback. The question remains, will there be enough completions to keep everyone happy?

Demaryius Thomas and Eric Decker broke out with Manning in 2012. The two wideouts combined for 179 receptions, 2,498 yards and 23 touchdowns. They both provided incredible value given their ADP (average draft position). Now that we know Manning can still sling the ball, their draft stock shoots up for 2013. But, the addition of Welker may deplete the individual value of each receiver.

Brandon Stokley caught 45 passes last season. Welker will easily eclipse that lowly mark. He should fight with Decker for production, and both wide receivers will fall around the WR2 range. Thomas should be locked in as a WR1. He's ridiculous in the open field and a huge target in the red zone. Peyton Manning reaps all the benefits. After throwing 37 touchdowns in 2012, owners have to be drooling at his potential with three huge weapons

On the other side of the Welker move, we have Amendola attempting to fill Welker's slot role. The problem? Amendola doesn't stay on the field long. He's played 12 games over the past two seasons. The upside is off the charts here. PPR owners can only dream of Amendola playing all 16 games with Brady.

The Patriots' offense caters to slot receivers. We saw Welker put up monstrous numbers over and over. We saw Troy Brown do it before him. Amendola will be a WR2, at least, if he plays all 16. Those chances don't appear likely, though, given recent trends. Be careful getting caught up in his skyrocketing ADP just because he's on the Patriots now.

Atlanta's offense is filled with weapons across the board with Jackson's arrival. Jacquizz Rodgers will continue to form a somewhat time-share, but Jackson takes the lead role in 2013. He has RB2 value playing on an offense that scored 26.2 points per game last year.

Michael Turner wasn't cutting it in short-yardage situations, so the Falcons let him go. They needed a back with the ability to fill that role. Jackson fits perfectly. He still has plenty left in the tank, and Atlanta will rely on him at the goal line, a place they venture often. Jackson's play translates well to Dirk Koetter's system. He'll be relied on in the passing game, and after seeing the success the Falcons had throwing screens in 2012, it's hard not to get excited about the veteran running back's potential.

There's always an early on RBs in fantasy drafts. Jackson is probably a Round 3 pick, but he may be overvalued due to his position, pushing him into the second round.

Forget about Mikel Leshoure and Joique Bell. If Bush is healthy, he's getting a ton of work. Detroit's offense loves involving running backs in the passing game. Bush is perfect for this role. Reports are already talking about him becoming a "three-down back" for the Lions.

PPR owners will want to grab Bush around Round 3. Leshoure can still cut into his production on the ground, but Lions' running backs are notorious for racking up receptions. Bell caught 52 passes in 2012 in a part-time role. Joique Bell. Interested in Bush now?

Arizona's offensive line is so bad. As a team the Cardinals averaged 3.4 yards per carry last year. Sure, there were injuries in the backfield. That's still terrible. Mendenhall struggled to return from ACL surgery in 2012. He started playing less with poor production. Then he was unhappy about playing less. Then he started having ball control issues. Then he played less again. Then he complained and got suspended. Overall, not a bad season.

Mendenhall might seem appealing given the fact he looks to be a step ahead of all other competition in the backfield. He shouldn't be more than a middle-round pick, though. Until he proves he's back to his old self, or the Cardinals trade offensive lines with a good team, hold off on your excitement.

Eight receptions + 114 yards + two touchdowns = woooo No. 1 waiver wire pickup!! That was the formula for Ogletree's instant rise to fame among the fantasy realm in Week 1 of 2012. He destroyed a depleted Giants secondary and subsequently destroyed everyone's roster. Twenty-five percent of his catches and 50 percent of his touchdowns came in that first game. Please do not draft him. Consider adding him and dropping him out of spite, if you're feeling vengeful.

Every season Cook is deemed as a "breakout player" by fantasy experts. Well, at least 2013 looks to be a possibility to actually fill that promise. The Rams were not afraid to pay him, so let's hope they utilize his talents, unlike a certain team that drafted him and kept him unhappy with his role in the offense. Cook might be replacing Amendola's production in the slot. For now he's a TE2, given the Rams' lack of tight end usage. Peg Cook as a later deeper pick with high upside.

Brandon Marshall will likely catch 98 percent of the passes from Jay Cutler again, so at least Bennett gets the remaining dividend. The young tight end creates mismatches and does damage over the middle of the field, and we can expect the Bears to take advantage of that skill set. Head coach Marc Trestman "should" open up the offense to include tight ends. We'll see if Cutler can check down from Marshall for once. Bennett is a TE2 as well.

LOL. We'll end it right there.