As players rack up big contracts and owners spend billions, the whole concept of a million dollars seems lost on us. Is that a good sign or are we doomed to take a dollar for granted?

Share All sharing options for: A little perspective on big free agent contracts

When I was 15, I could no longer continue to mooch off of my single mother and it was time to get a job and at least start paying for my own entertainment. I began as many do, working a cash register at McDonald's. For this job, I would be paid the minimum wage of $5.50 per hour.

It's hard to believe that anybody could do anything while making $5.50 per hour, but then again movies didn't used to cost $13 just for the price of admission. 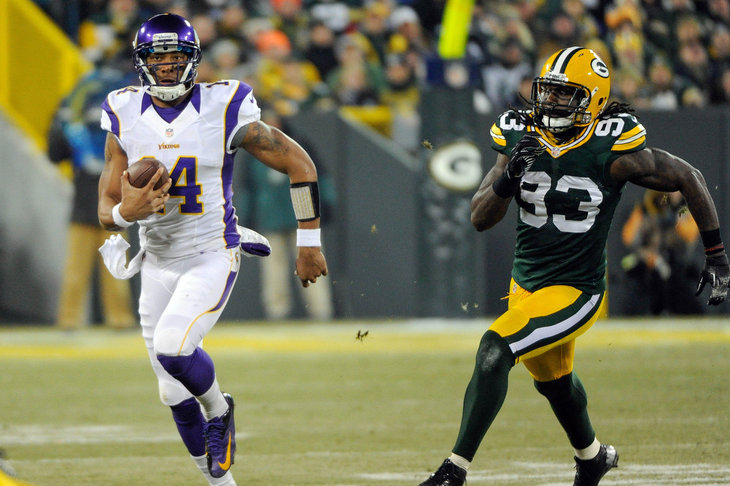 Teams spent big to land the top names in free agency. Which deals will front offices and fans end up regretting?

Not a bad chunk of change. It just took you 60 hour work weeks for 100 years and you got away with never paying your taxes.

This week, dozens of NFL free agents have signed new deals. Some of those contracts will be called "too expensive" or "a real steal of a deal!" The Seahawks signed Cliff Avril to a two-year, $15 million contract with $11 million guaranteed and it seems like it could be a good deal for Seattle. Meanwhile, the Colts signed Ricky Jean-Francois to a four-year, $22 million contract and it could be seen as an overpay.

Mike Wallace was given $65 million by the Dolphins. The Titans gave $10 million to Shonn Greene. Jared Cook got $35.1 million from the Rams. And that's just a few of the names you actually recognize.

Dannell Ellerbe took $35 million. Jermon Bushrod got just under $36 million. Erik Walden is going to get the chance to make $16 million with the Colts. Walden is going to be 28 before this season and has been a below-average outside linebacker for the last two years.

If you go to college and get a degree then go on to a good job making a solid $30 per hour, you will make $62,400 per year and after 100 years of that you'd have over $6.2 million. Congratulations on saving all of that money!

It's not that I am angry at the players for taking millions of dollars to play a sport. Who among us wouldn't be happy to do the exact same thing? Although I could bring up that it's a shame to see millions and billions of dollars go to waste as athlete after athlete goes broke to the point of it becoming a "same old story" rather than a shock. A person manages to blow some $50 million in career earnings or whatever and we as a society start to say "Ha! Those knuckleheads."

How players decide to waste the millions of dollars they are paid because the owners make billions of dollars from us, the fans, is an issue for another day. Instead, I want to get back to the focus of today's rant - how "$15 million" can start to lose all meaning completely.

Avril's $15 million is considered a bargain relative to what we know about NFL contracts and defensive ends with his pedigree. He makes that much money because as a football player he has earned it (whether or not athletes being instant millionaires simply implies that we are a broken system is up for debate) but at the end of the day two years, he will still have made $15 million. Fifteen million dollars. At what point does "$15 million salary" and "bargain" come together? Or how about the fact that a cheap rookie, someone like Russell Wilson, can make $500,000 and fans are stunned that he could be paid so little.

I want my sense of "damn" back when I hear a guy is getting paid 7.5 times the salary I would dream of making.

Joe Flacco, a good quarterback, will get paid more in a day ($54,794) than many of us will make in a year. Here is my biggest problem with that - did any of us really feel shocked to see him get $20,000,000 per season? Did you say to yourself "$20 million a year? Getting paid $100 an hour for 40 hours per week for 100 years would be $20,000,000!" Thanks to the mega-contracts given out in sports every year, especially the atrocities of baseball (I still don't understand where the money comes from there, because I hear fewer and fewer people tell me they watch baseball) where Albert Pujols will get paid $30 million in a season when he's over 40, we've started to completely lose our sense of what this money really means.

An athlete getting paid $750,000 in a season starts to feel like a minimum wage job to any of us in comparison. That's not right. It's not a minimum wage job. It's $360 an hour. That's significantly more than ten times per hour of what I make. No, I am not an especially talented person like those guys, but it's not about what they make as much as it is about what we feel about it. I want my sense of "damn" back when I hear a guy is getting paid 7.5 times the salary I would dream of making.

Yet we concern ourselves with $500,000 per year for a "poor" rookie and many others feel sorry for people that waste a career's salary that saw them earn ten or 15 or 30 million dollars.

Jason Campbell got paid $3.5 million by the Bears last season and Chicago was praying that he would never play. That's mind-funking ridiculous and we shouldn't ignore it. We should think more about the fact that Campbell can get more in a half-year of practice than you might make, ever. We should pay attention when a linebacker with 14 career starts gets a $35 million contract. We shouldn't forget about it when a receiver that's missed 20 games in two years gets $31 million. Is it fair? Apparently.

It's not sane. And I want to stop pretending like getting a million dollars in a year of football is a "ripoff" for a player while brushing off that Jean-Francois got $22 million after four years as a backup.

It's no less ridiculous than making $8 an hour for 100 years, and a whole lot of people are still making that. We just don't talk about them.