Victor Cruz rumors: No one is expected to sign Giants WR to offer sheet

Minnesota and St. Louis, the teams with two first-round picks, are not expected to sign restricted free agent Victor Cruz to an offer sheet, according to ESPN's Adam Schefter.

Share All sharing options for: Victor Cruz rumors: No one is expected to sign Giants WR to offer sheet

There are two teams with two first-round picks in the 2013 NFL Draft, the Minnesota Vikings and the St. Louis Rams.

According to ESPN's Adam Schefter, neither are expected to sign Giants restricted free agent Victor Cruz to an offer sheet.

Cruz received a first-round tender offer from the Giants in restricted free agency, meaning a team would have to give the Giants their first-round pick in the 2013 draft if they signed him to a contract and the Giants did not match.

The first-round tender will give Cruz $2.879 million for the 2013 season with the Giants.

The Vikings likely took themselves out of the running by signing former Packers WR Greg Jennings to a five-year, $47.5 million contract Friday. Cruz is expected to want top receiver money, upwards of $11 million per season.

The Rams lost WR Danny Amendola to the Patriots, who signed him to a five-year, $31 million deal earlier this week. With a truckload of picks in this draft, and the need for offensive firepower, St. Louis can draft heavy on big time offensive talent instead of spending the cash and a pick on Cruz.

Does that mean Cruz is safe in New York? Most likely. The Dolphins signed free agent WR Mike Wallace to a five-year, $60 million deal at the start of free agency, one year after the Steelers gave him a first-round tender offer. He didn't receive an offer then. If nothing else, history is on the side of the Giants. 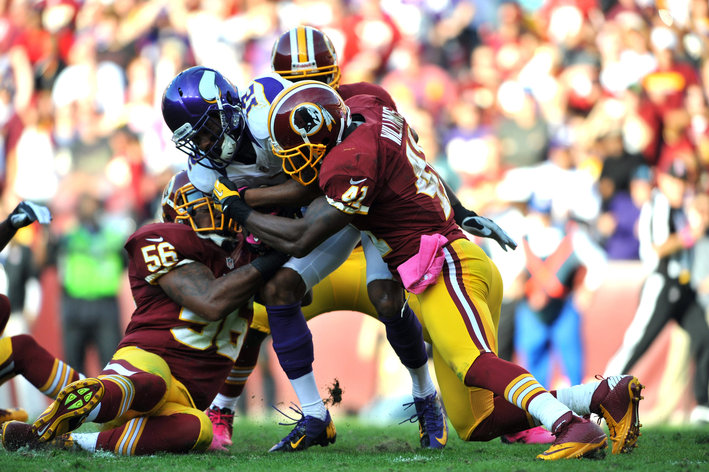 Percy Harvin got paid, but other slot receivers pale in comparison to the guys outside the numbers

Cruz is coming off back-to-back 80-catch, 1,000-plus yard seasons and is considered one of the better receivers in the league. An undrafted free agent out of the University of Massachusetts, Cruz has been one of the best values per dollar in the game.

But those days could be coming to an end. Cruz's production and lack of big time contract in his first two (vested) seasons in the NFL would logically lead a person to believe he wants to get paid for the past as well as the future. He's a vital component to the Giants' outstanding passing game, and he'll be a priority for them in the future.

With deals like Wallace's and Dwayne Bowe's in Kansas City, along with the deals struck with the receivers in last year's free agency market, there is a lot of money being spent on the position. However, that market isn't materializing in the same direction for slot receivers like Cruz. Amendola's deal with the Patriots pales significantly in comparison to Wallace's - an outside-the-numbers, big-play guy - and Wes Welker's 2-year, $12 million deal with Denver shows a very hesitant market for receivers who live inside the hashes.

Without that market in place, Cruz will have to dig in if he wants to get paid like his vertically-inclined brethren of the wide receiver position.