NFL March Madness: No. 1 'Adrian Peterson Abuses The Packers' vs. No. 8 'DeAngelo Williams Screen And Score'

Adrian Peterson is a beast. The Packers already knew that, but they got a reminder on this touchdown run. Was it good enough to advance past DeAngelo Williams' screen and score?

Share All sharing options for: NFL March Madness: No. 1 'Adrian Peterson Abuses The Packers' vs. No. 8 'DeAngelo Williams Screen And Score'

This play started innocently enough as Peterson broke his run to the outside at a wall of Packer defenders. The wall, however, proved to be no match for AD. He shrugged off a tackle attempt from Morgan Burnett before M.D. Jennings made the mistake of going for the knockout blow.

Peterson was hardly phased by Jennings' attempt and managed to keep his balance and stay in bounds despite the blow. Tramon Williams grabbed for Peterson's jersey but came up with air as Peterson turned on the jets to outrace Casey Hayward to the endzone. At least four Packers had a shot to tackle Peterson, but they barely phased him as he took it 82 yards for the score. 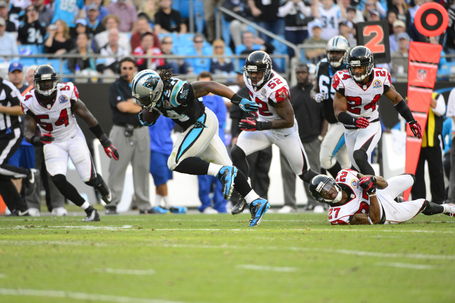 With the help of some excellent blocking and questionable defense, Williams made this 53-yard touchdown look easy. Williams caught the ball with blockers in front of him and made excellent use of his blocks with one sharp cut.

After hurdling a fallen blocker, Williams was able to shrug off a tackle attempt and then it was all speed from there as he outran the Falcons over the final 40 yards. His reward for the effort was being thrown to the ground and hit on the head by teammate Mike Tolbert.