NFL March Madness: No. 3 'Jermaine Gresham Has Stiff Arms' vs. No. 6 'Adrian Peterson Cares Not For Your Arm Tackles'

Not many could slow down Adrian Peterson in 2012. Will Jermaine Gresham's stiff arms be enough to get past Peterson this time?

Share All sharing options for: NFL March Madness: No. 3 'Jermaine Gresham Has Stiff Arms' vs. No. 6 'Adrian Peterson Cares Not For Your Arm Tackles'

(6) Adrian Peterson Cares Not For Your Arm Tackles 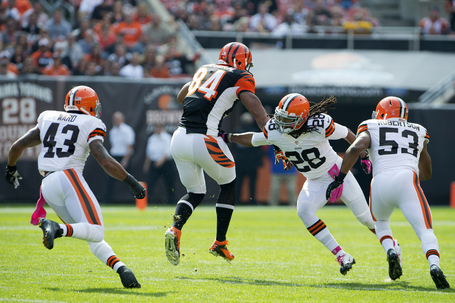 If the NFL handed out Grammy-style awards, Jermaine Gresham would have won the "best use of multiple stiff arms" for this 55-yard touchdown.

After making a short catch, Gresham fends off linebacker Craig Robertson with a righthanded-stiff arm, but also manages to dodge the incoming safety while still using the stiff arm. Not the fastest tight end in the league, Gresham gets run down by Joe Haden, but Gresham has a lefthanded-stiff arm at his disposal as well. Gresham holds off Haden while T.J. Ward rides Gresham's back into the endzone.

(6) Adrian Peterson Cares Not For Your Arm Tackles 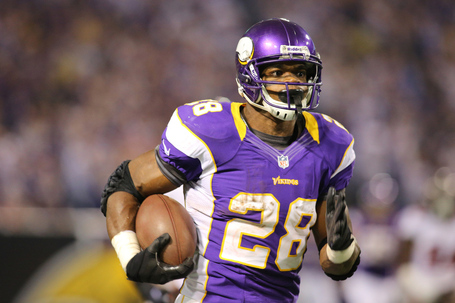 Cornerback Eric Wright had the first opportunity at Peterson, but barely even caused him to break stride. Ronde Barber got his shot next, but didn't have any better luck than Wright. Lavonte David appeared to have a shot at Peterson as well, but he was decleated by Jerome Simpson. Peterson did the rest from there, outrunning the other defenders for the touchdown.