NFL March Madness: No. 2 'Doug Martin Muscle Hamsters Past Atlanta' vs. No. 7 'Mohamed Sanu Has Skills'

This matchup features a pair of rookies as Doug Martin did what Doug Martin does while Mohamed Sanu impressed with his endzone catch. Who will advance?

Share All sharing options for: NFL March Madness: No. 2 'Doug Martin Muscle Hamsters Past Atlanta' vs. No. 7 'Mohamed Sanu Has Skills'

The East -- First Round

Watch the play at NFL.com

This 40-yard touchdown run by Martin started out innocently enough. He took the handoff and made one cut to burst through the hole. Five yards beyond the line of scrimmage is where the real action began as Martin stepped and spun out of an attempted tackle by Chris Hope.

Martin then shrugged off an attempted tackle from Thomas DeCoud as he maintained the spin move despite the contact. From there it was all speed as Martin outran Asante Samuel to the endzone. 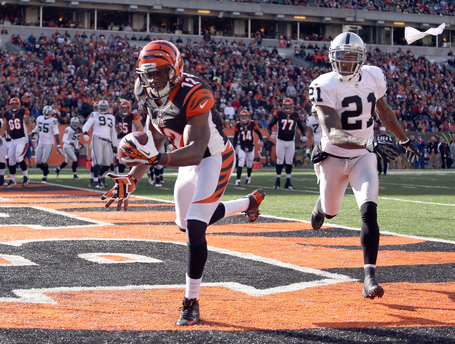 Watch this play at NFL.com.

In order to be considered one of the top touchdowns of 2012, a 2-yard touchdown catch needs to be especially impressive. This grab, from Mohamed Sanu is just that. Sanu gained outside leverage on Raiders cornerback Stanford Routt fairly easily then made a tremendous over the shoulder one-handed catch.

Maybe more impressive than the catch was Sanu's ability to get two feet down as he was lunging out of bounds. Sanu controlled the catch immediately with one foot in then secured the ball with his other hand as he got a second foot inbounds showing great hands and balance.