Doug Martin and Larry Fitzgerald cruised through the first round, but who will advance to the Elite 8? Vote now.

Share All sharing options for: NFL March Madness: No. 2 'Doug Martin Muscle Hamsters Past Atlanta' vs. No. 3 'The Packers Can't Stop Larry Fitzgerald'

Watch the play at NFL.com

Martin's touchdown against the Falcons was good enough to advance him through the first round with ease. Martin collected 69 percent of the vote in his first round matchup with "Mohamed Sanu Has Skills." 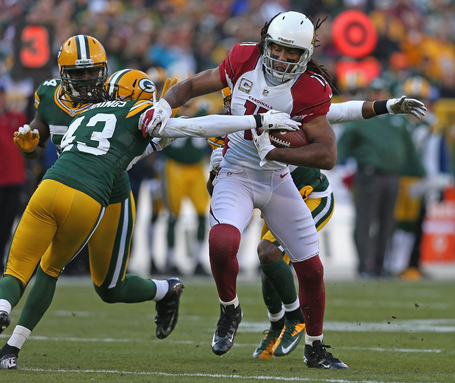 Watch this play at NFL.com.

Like Martin, Fitzgerald cruised the the first round. Fitzgerald collected 84 percent of the vote against "C.J. Spiller Breaks Away" the highest vote percentage of any team in the East region. Will he knock off another runni