It will be wide receiver vs. wide receiver in this Sweet 16 matchup between Dez Bryant and Randy Moss. Which touchdown will prevail?

Share All sharing options for: NFL March Madness: No. 3 'Dez Bryant Nonchalantly Destroys The Saints' vs. No. 7 'Randy Moss Still Has Moves' 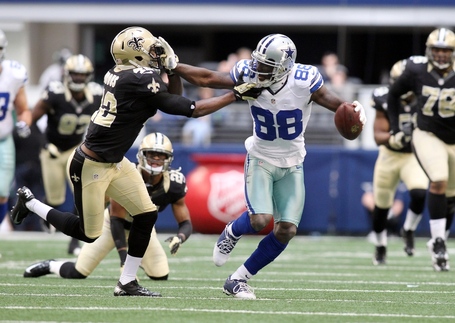 Bryant's stiff arm and run was enough to easily advance past Darrius Heyward-Bey as Bryant collected 65 percent of the vote. His touchdown is similar to the one scored by Moss, which should make for an interesting Sweet 16 matchup.

Moss pulled an upset over the No. 2 seed "Chris Ivory Goes Tecmo Bowl" and he did so by a single vote. Moss received 37 votes in the first round, one more than Ivory. Should he advance again, Moss could go on to face Santana Moss in a Moss vs. Moss Elite 8 matchup.