WHEEL ROUTES: The first out player will be a test of America's tolerance

This week in WHEEL ROUTES, Robert Wheel addresses how America will be tested by the first out gay NFL player, NFL concussion stonewalling and more.

Share All sharing options for: WHEEL ROUTES: The first out player will be a test of America's tolerance

CBS Sports' Mike Freeman noted on Monday that a gay player is considering coming out of the closet this summer and continuing with his playing career. The player's main concern is not acceptance among his teammates but from the vitriol hurled his way by fans. Then on Tuesday, the Supreme Court heard arguments for overturning California's ban on marriage equality.

Changing attitudes in the NFL 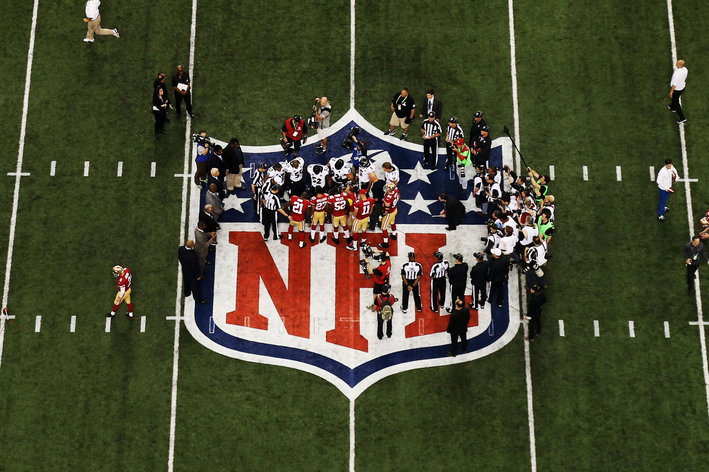 Players, not the commissioner, can do more to lead the effort for tolerance in the NFL.

It's an interesting dynamic because the tone of marriage equality opponents has remained pretty constant. Sure, in 2003 Republican Senator Rick Santorum compared homosexuality to bestiality. But in the 2004, the Republican nationwide effort to turn out conservative voters based on opposition to gay marriage largely disclaimed such rhetoric. Instead they focused on terms like "traditional marriage," even though "traditional" technically means marrying women off as a means of controlling their father's property.

But the anti-gay forces outside of Westboro Baptist have largely abandoned a fire and brimstone approach to opposing homosexuality. They use the "love the sinner, hate the sin" approach (we'll take away your rights but we love you!) and other types of intellectual dishonesty.

Which is what makes the gay player's decision on whether to come out of the closet such a test of the American anti-gay movement. Do they really love the sinner but hate the sin? In that case, the player who comes out of the closet won't face too much adversity from the fans because anti-gay people still love gays personally. But if the forces of inequality aren't for some antiquated form of society and really are just demonizing an easily marginalized minority for the sake of political gain, then they'll have engendered hatred.

That's why an NFL player coming out of the closet is such a big deal. For him, but for us as well. We'll finally find out if people who oppose equality really are for protecting some made-up tradition or whether they really just want to take advantage of bigotry.

Oh, and suck it, Deadspin.

You'd think he'd be banished to coaching UCLA or something.

My proof is Brad Childress. He was a decent OC working under Andy Reid, and then Childress moved on to become one of the worst head coaches in recent memory in Minnesota. He then latched on as offensive coordinator for a terrible Browns team and you'd think he'd be banished to coaching UCLA or something.

But the Big Wheel Corollary dictates that he keeps finding work in the NFL. Sure enough, Andy Reid hired him to help back up new OC Doug Pederson.

The NFL Keeps Lying About Concussions

Speaking of people who ignore all empirical evidence to the contrary of their opinions, an NFL doctor asked that references to CTE be removed from a fact sheet summarizing health risks to players because it was not fully understood.

This is yet another instance of the NFL aping the tobacco executives who 50 years ago disputed whether cigarettes can be tied to lung cancer. Thankfully, the democratization of data makes disinformation much more difficult. But important decisions are still made behind closed doors and without public input. We need to remain vigilant on NFL disinformation because their medical experts have proven far from reputable in the past.

Osi Umenyiora Signs With the Falcons

As a Giants fan I'll miss him, but last year he looked overwhelmed at the point of attack and couldn't defend the run. Part of that might have been Perry Fewell's scheme, which had too many "figure it out as you go along" elements, but Atlanta might have been better off signing John Abraham/Dwight Freeney/their first-round pick Sam Montgomery.

• Not just another win for the Bulls

• A Heat loss means nothing, and that says everything

• Kobe gets away with game-changing foul | NBA admits mistake