Despite Jerry Richardson's insistence otherwise, the Carolina Panthers are a very profitable business. What takeaways can we glean from the team's books?

Share All sharing options for: Lessons from the Carolina Panthers' leaked financial statements

Deadspin dropped another bombshell on Thursday afternoon, getting a leaked copy of the Carolina Panthers financial report from the 2011 and 2012 fiscal years. Those were two very good years for the Panthers: The team collected $112 million in profit during that time.

First of all, our congratulations to owner Jerry Richardson. He's not as poor as he wanted you to think he was back during the 2011 NFL lockout. In these difficult economic times, it's always good to see some modern day Horatio Alger finding their way to success.

Unlike your typical small business owner, Richardson is fortunate to be a part of the National Football League, which guarantees its exclusive membership a very good return on their investments. If you have a sweet stadium setup, which the NFL will help you get, it's even more lucrative.

Thanks to the leaked documents via Deadspin, the rest of the world is finally privy to just how profitable that enterprise really is.

Let's break it down into easily digestible bullet points. 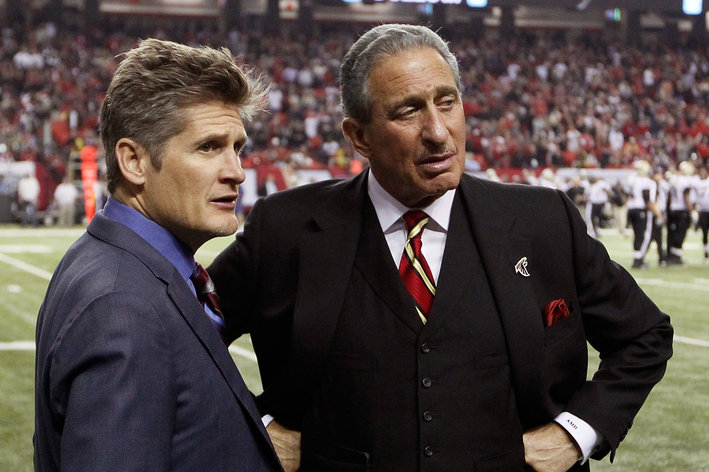 Questions and answers about the Falcons' new stadium plan. It's not that bad of a deal, really.

Richardson wants to fix up his stadium, which was built in 1996. That plan calls for two-thirds of the estimated $250-$300 million cost to be paid for with public funds. The city of Charlotte has expressed a willingness to chip in, but the Panthers are getting resistance from both sides of the aisle in the statehouse as well as from the governor.

Public money for a stadium fix-up is already opposed by 88 percent of North Carolina residents. Nobody should be particularly surprised that Richardson was making money, but the revelation of his team's well-guarded finances is unlikely to do him any favors when it comes to asking for $64 million of state funds.

It's a nice chunk of change by any accounting. Look at the financials in the document. An NFL team is a hefty operation to run. Teams are worth around a billion dollars, with those at the lower end having an estimated valuation of between $700 - $800 million and a few franchises sitting north of the billion dollar mark. Obviously, an NFL franchise isn't the most liquid asset, so the billion dollar valuation is separate from income and revenue.

Richardson's Panthers cost $223 million to operate for the 2012 fiscal year. Net income was $26.3 million, and it took a hit from the Panthers spending more on players between the two seasons (thanks Marty Hurney!).

Yes, this is a lot of money, more than most probably thought the Panthers were making. Moreover, it's a testament to the league's model, one that allows small market teams to do well, even when the team on the field struggles and ticket sales fail to reach their peaks.

However, the Panthers could be making even more money.

Deadspin hit on this in their analysis of the documents, reminding readers that the 2011 lockout was really sort of Whiskey Rebellion by the league's small market owners played out as a war on players. Richardson was one of the most vocal hawks in that fight, at one point claiming to have lost $200 million.

Look closely at the local revenues. Carolina pulled in slightly less than $100 million in ticket sales, suites, club seats and other revenue streams not tied to the league's television deals and other pooled activities. That line item is what separates NFL teams into a tidy class system.

"We signed a [expletive] deal last time, and we're going to stick together and take back our league and [expletive] do something about it."-Richardson at a March 2010 meeting with NFL owners, reported by Yahoo.

Stadiums are big business, and they generate revenue streams that a team's ownership doesn't have to throw back into the pot to split with players and teams. A fixed up stadium means more money. If financial statements for the Dallas Cowboys or the Washington Redskins ever saw the light of day, the difference between what Richardson makes versus those teams would go a long way toward explaining the rift among teams.

Premium seats are an important part of the stadium pie. The Panthers collected more than $23 million in each of these two seasons from club seats and luxury suites. Suites brought in $10 million and the club seats more than $13 million.

Without seeing the books for the other NFL teams, it's impossible to know what kind of revenue those seats generate elsewhere. A 2011 study conducted by consultants for Los Angeles and AEG in conjunction with the Farmers Field proposal gave a rough estimate of what teams generate from premium seating. They put the Panthers at #12, with an estimated $38 million of potential revenue from premium seating.

The Cowboys led the league in that study with an estimated $137 million per year in potential premium seating revenue. The Giants and Jets were in the second and third spots with an estimated $96 million and $91 million respectively.

It is just an estimate, but it does speak to the differences in earning potential among the 32 NFL teams. The proposed renovation for Bank of America Stadium would include additional seating as well as upgrades for premium seats.

The NFLPA tried to get NFL teams to open the books during the 2011 lockout. Obviously, it didn't happen. A look at the Panthers' finances could increase the pressure on teams to open their books, without the information having to be leaked.

Stadium requests are finding more and more push back from local citizens. A questionable stadium deal in Minnesota was saved thanks to some fourth quarter lobbying by Roger Goodell and Governor Mark Dayton last May, scaling back on the public commitment and finding ways to make it more palatable to residents (via a gambling tax). Voters are opposed to paying for renovations in Miami.

Future public funding for stadiums may hinge on teams certifying exactly how much they can contribute to the deals by opening the books. Combine that with an incredibly sweet system of tax write-offs NFL teams enjoy, and the Panthers leaked financial statements might be the first step toward a golden age of league transparency.