There is a new regime in Arizona, will they help the Cardinals contend in a tough NFC West? 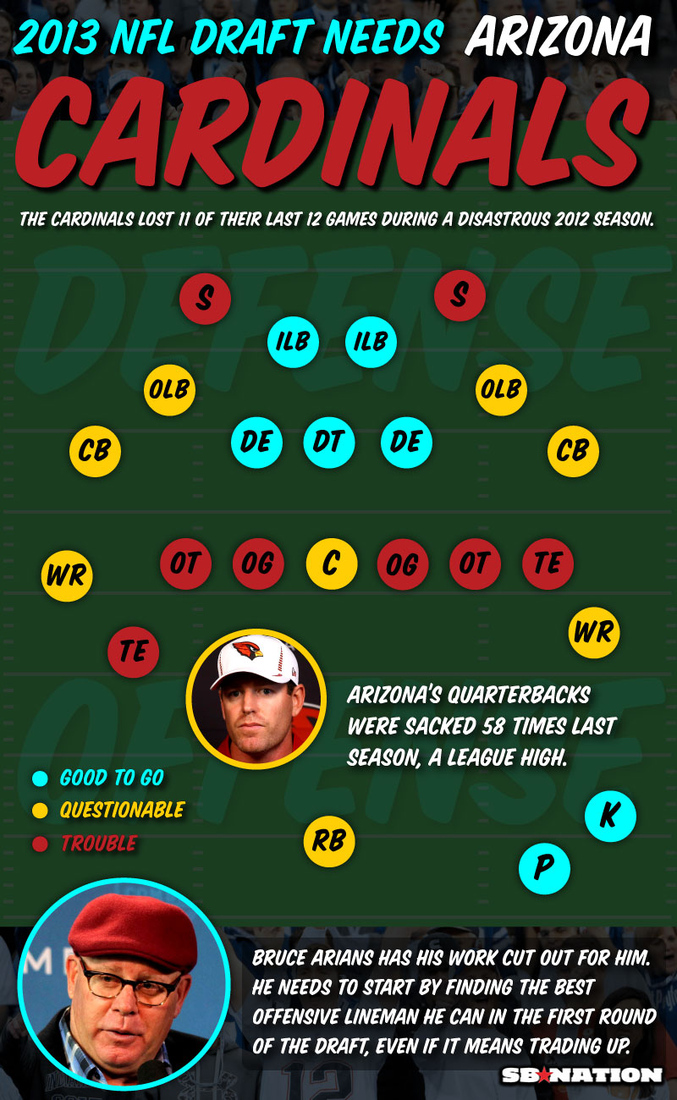 After a 4-0 start to the season, the Arizona Cardinals looked like NFC contenders early last season. A nine-game losing streak crushed that idea quickly -- and one win in the final 11 games brought a complete overhaul to the desert. Ken Whisenhunt and Rod Graves are gone and now Bruce Arians and Steve Keim are tasked with bringing Arizona back into contention.

More: Revenge of the Birds

Quarterback was a major issue last year as four players started for Arizona and combined to throw 11 touchdowns compared to 21 interceptions. Kevin Kolb and John Skelton are gone, and Arizona acquired Carson Palmer to fill the void. It may not matter who plays quarterback if the offensive line doesn't do a better job of blocking than it did last season. Offensive line is one of Arizona's biggest needs in the draft, but it isn't the only one.

Offensive tackle - Arizona had major issues along the offensive line last season, including a void at both right and left tackle. The Cardinals will get a boost with Levi Brown returning from injury, but tackle remains a need heading into the season. The 2013 draft is deep on tackles, but the top few may come off the board before Arizona picks at No. 7.

Outside linebacker - Daryl Washington is among the best inside linebackers in the NFL, but Arizona didn't get much production from either outside spot. Sam Acho, Quentin Groves and O'Brien Schofield combined to play the majority of OLB snaps, but Arizona could use one, if not two more outside 'backers.

Safety - Adrian Wilson and Kerry Rhodes are gone, leaving the Cardinals in search of two new starting safeties. The Cardinals re-signed Rashad Johnson this offseason, but could draft a safety early to step in as a starter from Day 1.

• What could happen in top 5? Expert predictions

• Darrelle Revis is a Buccaneer

• An early look at fantasy rookies