The Philadelphia Eagles will have a fight to be their starting quarterback, as Matt Barkley will push Michael Vick, Nick Foles and Dennis Dixon for the job.

Chip Kelly and the Philadelphia Eagles wanted Matt Barkley enough to trade up for him, and now that they have the USC signal caller, the competition at quarterback is open. Per Albert Breer:

Chip Kelly told me the competition among Vick, Dixon, Foles and Barkley will be wide open. Said he talked to Foles after drafting Barkley.

The Eagles' passing game struggled in 2012 behind a piecemeal offensive line. Michael Vick got hurt, and wasn't particularly effective when he was able to play, tossing 12 touchdowns against 10 picks. Nick Foles would take over, and the team lost six of seven games when he was in the lineup as he had the same ratio, six touchdowns with five interceptions. The team also has former Steelers backup Dennis Dixon -- a quarterback under Kelly at Oregon -- and G.J. Kinne on the roster.

How Matt Barkley fits the Eagles 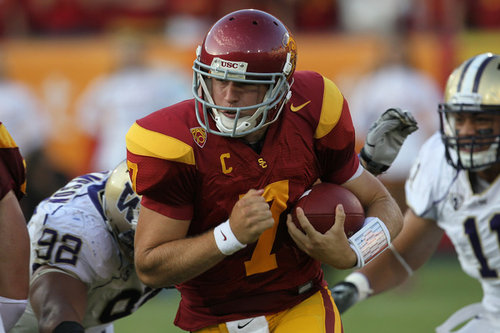 A look at what Barkley brings to Chip Kelly's offense

As Kelly looks to install his up-tempo offense with the Eagles, he'll need his quarterback to make things work. At Oregon, those quarterbacks were guys who could run -- perhaps more of a Vick type -- rather than Barkley, who's more of a stationary type. But you'd better believe Kelly is familiar with Barkley's game after the senior threw for 484 yards and five touchdowns against Oregon this past season. The whole thing caught Bleeding Green Nation off guard:

So much for what we thought we knew about what Chip Kelly wants in his QB. Barkley is not a runner, he is a classic drop back pocket passer who relies on touch and accuracy. With the chance to select any of the athletic QBs in this draft, Chip decides to take the most typical pro style pocket passer in the draft.

Bleeding Green Nation had ranked Barkley No. 2 among quarterbacks available at the beginning of the fourth round, but the Eagles obviously disagreed, trading for the top spot in the round specifically to get him.

• The Honey Badger heads to Arizona