Who was able to nab the best undrafted free agents?

Draft day doesn't end when Mr. Irrelevant is selected. Instead, it kicks off the undrafted free agent free-for-all. Gone is the sensible, organized and systematic draft, replaced by 32 teams all fighting for the same players and trying to sell them on why they are the best fit for that player.

The importance of undrafted free agents cannot be overlooked either. They provide depth for teams and some develop into outstanding players. John Randle, Antonio Gates and Wes Welker were all undrafted free agents. It's still unrealistic for anyone to expect one of the players they pick up after the draft to become as good as that trio, but there is quality to be had and rosters to be improved.

So who snapped up the best undrafted free agents this year?

Nobody questions Rogers' talent. He is a 6'2, strong receiver who is a weapon over the middle and was an All-SEC selection as a sophomore in 2011. But Rogers had some serious off-field problems and was dismissed from Tennessee after a series of missteps before the 2012 season.

After transferring from Tennessee to Tennessee Tech and having no major problems, while putting up big numbers, Rogers went undrafted. The question now is whether he's gotten past some of the immaturity issues that plagued him at Tennessee. If so, Buffalo got a high-level talent who can make a real impact in their offense from day one and worst-case scenario, they cut him like so many other undrafted free agents will be. The Bills certainly got the better of the risk/reward game with Rogers.

Like Rogers, Scott is a gamble, but it is for completely different reasons. Scott is a gifted athlete with a strong arm and excellent mobility, but he also had a slew of mechanical problems. It's going to take some time for the Jaguars to rebuild Scott's throwing mechanics, improve his footwork and get him caught up on running a pro offense. He has the physical tools to be a very good NFL quarterback. Scott may not be the immediate impact quarterback who can challenge Blaine Gabbert, but he has the potential to turn into something special. Jacksonville isn't going to challenge for the Super Bowl in the near future; they have the time to develop him. 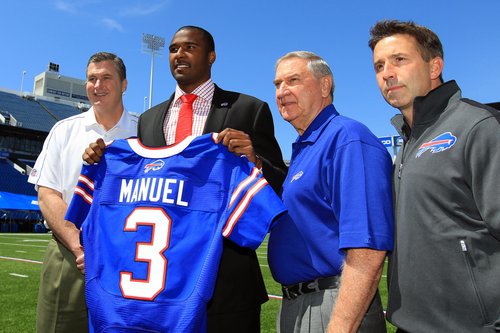 The picks are in, and the 2013 NFL Draft is over. The 254 players picked won't see a football field for weeks so it naturally seems like the perfect time to judge how all 32 teams did.

Bray has a huge arm, but does he have anything else to go along with it? Nobody is quite sure what to make of Bray. He might just be a big arm and nothing more. He might also have the ability to develop the skills that were absent at Tennessee. Kansas City and Jacksonville are in similar situations, needing to rebuild an atrocious roster and several years away from really contending, so they also have the time to put into a project quarterback.

The stereotypical Stanford linebacker is strong and makes up for what he lacks in speed by being exceedingly smart. While that obviously isn't true of all Stanford linebackers, that fits Thomas perfectly. There are questions about whether he has the speed to cut it in the NFL, but he was a star for the Cardinals. He was a monster as a blitzer. Thomas is slightly undersized, but is still very strong and has every other tool you look for, which the Saints hope can mask his slower feet.

Jefferson plummeted down draft boards and went from a possible mid-round pick to undrafted, much to the Cardinals' delight. Arizona is desperate for safeties, so they had to be thrilled to have a shot at Jefferson. The former Sooners safety will be happy to join a team where he can make a run at early playing time. The concern with Jefferson is that he is just 5'11 and that he doesn't have great speed to make up for it. He is a physical player who is happy to step into the box and make big plays. Jefferson has to add some weight, but he would hardly be the first short safety.

McCray is going to have an adjustment period as he transitions to outside linebacker after playing as a defensive end at Florida. He is a good, fast pass rusher. The Broncos don't need him to play anytime soon, so he will have time to learn his new position and how to play with more discipline. If he does make the move smoothly, he can give opposing offenses fits. After all, this is the same player Luke Joeckel called the toughest player he had to block last season.

Geathers has the bloodlines, with a father, uncle and two brothers who all played in the NFL, but he needs to learn how to play the position if he wants to have a NFL career. He really struggles with his technique and can get beaten by weaker, less talented players at times, but the talent is there. The good news is that everything Geathers struggles with can be taught, which the Chargers will be more than happy to do.

Nixon had a strong freshman season, but plateaued there. He never made good on his big 6'6 frame, long arms and quick feet that made him one of the nation's most sought-after high school recruits. Most of that can be attributed to technique, but there were also questions about his focus. He rarely showed the consistency of an elite tackle that his physical gifts hinted he was. The Redskins are taking a gamble on the fact that they can tap into Nixon's talent and get him to play hard every snap. If they're right, they'll have stolen a good blocker.

No team has done a better job of uncovering high-talent, low-production college players and turning them into quality NFL players than the Seahawks. Can they do that again with Bailey? He's big, agile and doesn't shy away from contact, but was often beaten by stunts and had a lot of trouble with consistency. Like Nixon, if he can tap into his considerable physical tools, he can be an impact NFL lineman.

There is no doubt that Fauria is a tall, gifted pass catcher who can be a real threat in the red zone. Can he be anything more than that? He struggled as a blocker at UCLA and had issues focusing, which scared teams off. That he doesn't do much after the catch doesn't help him either. At 6'7 with long arms and the ability to box defenders out, he's the ultimate red-zone target. That alone makes him valuable, even if that's all he is.