The Seahawks kicked the tires on Tim Tebow and said "no thanks." Meanwhile, Brendan Ayanbadejo's claims that four gay players could come out soon appear to have been premature. Check out those stories and more.

NFL free agency has entered a lull, and could stay there until after the NFL Draft beginning April 25. There are still plenty of big stories happening, however, including the return of Tim Tebow Watch and hints that the league may soon have its first openly gay players (or maybe not quite yet). 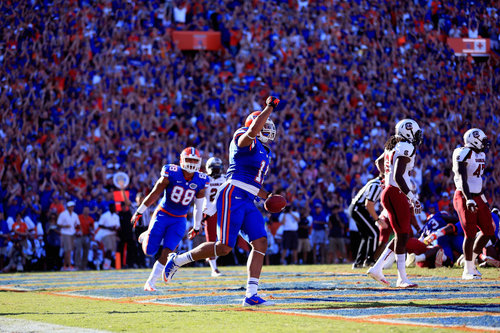 The hybrid tight end is changing the NFL. SB Nation's Danny Kelly sits down in the film room for a closer look at the position and some names to know in the 2013 NFL Draft.

The Seahawks kicked the tires on Tebow, but the team is not interested in signing him as a backup to Russell Wilson, according to reports. The Seahawks are in need of a quality backup with Matt Flynn moving on to Oakland, and the New York Jets are angling to get rid of Tebow. Unfortunately for him, however, his potential in a running option package apparently doesn't offset his general ineffectiveness as a passer in the eyes of NFL teams. The Seahawks could eventually sign one of Seneca Wallace, Brady Quinn, Matt Leinart or Tyler Thigpen.

No truth to Ayanbadejo's claim about gay players coming out

Brendan Ayanbadejo set off a mild media storm when he revealed in a recent interview that four players in the NFL were contemplating coming out as gay on the same day. The news incited a lot of emotions, and opened up discussion about tolerance in the NFL. But as Outsports points out, Ayanbadejo's claims weren't entirely accurate and are potentially damaging to the cause of gay players.

What's the upshot of Ayanbadejo's claim? First, stop believing all the headlines on this issue. I never believed there was any truth to this story, much like I don't believe there's any truth to what Mike Freeman wrote last month. Just wait for the headline that someone has come out; Anything else is just a guess.

Second, this kind of speculation doesn't help anyone. As Davis pointed out, it pushes athletes deeper into the closet and makes them more scared of every move they make. No one wins in this.

Jones has seen his NFL Draft stock tumble since the end of the college football season. A scare with spinal stenosis kept him from working out like he wanted to at the Combine, and when he struggled at Georgia pro day in March many mock drafts dropped him out of the Top 10 altogether. Jones' film doesn't lie, however, nor does his impressive visit list, which added the Bills on Friday. The Bills pick No. 8 overall in the Draft, and Jones is expected to be available. The talented pass rusher could be just what the organization needs.

Joe Flacco will be making his silver screen debut soon, and he'll admittedly be playing a natural role. A film called "Unitas We Stand" about the career of the late, great Johnny Unitas will use Flacco as a stand-in for the legendary quarterback during the final scenes depicting the Baltimore Colts' 1958 NFL championship game victory. Flacco's role will be limited to throwing footballs while wearing a helmet, but at least it's a start.

• 4 gay NFL players could come out on same day

• Which QB does Cam Newton most closely resemble?

• The next step for Mankind: Mick Foley's evolution